How do I create a single object with two different texture and UV maps?

I've been trying to add some "fringe" to a coyote I've been modeling. I have the planes all where I want them, and made the original coyote one object, while the extra panels I'll be using for fringe are a separate object. Both objects have their own UV map and their own texture, the Fringe Object's texture having some transparency. 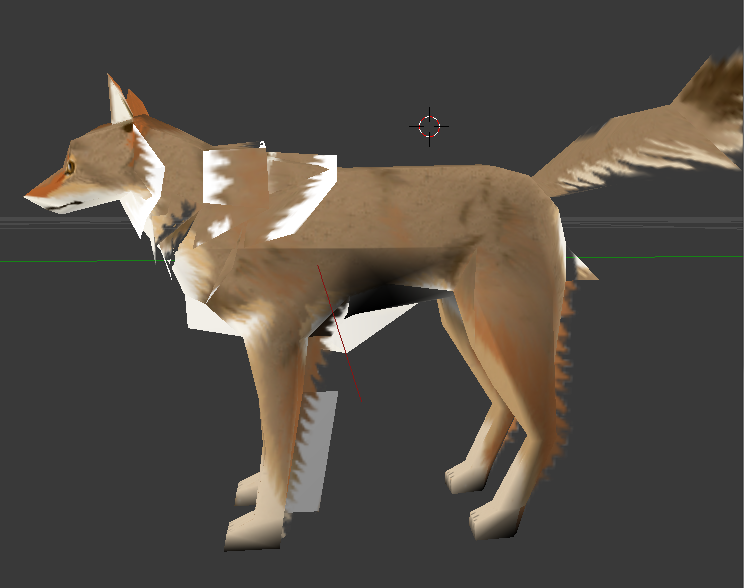 I haven't finished tweaking the texture in Photoshop yet, but I thought I should get this problem figured out before doing anything else.

Note: The tail has the fringe effect that I was going for on the rest of the body, but it is not part of the Fringe Object. The left side of the tail seems to work perfectly, but the right side of the tail has the same problem: the transparent parts of the texture make anything beneath it transparent as well, instead of just allowing the next layer of texture to show through. Ideally, I would have included all of these "fringe" panels while I was modeling in the first place, but decided to add them later after I'd already made a texture for the coyote.

If it will help, here is the file I'm working from: http://www.pasteall.org/blend/29395

I found two problems with your model:

The only real solution to the second problem is rendering the triangle that is furthest away from the camera first, then the ones closer to the camera. If you want to use this model in the blender game engine you can make Blender do this sorting for you. Create a material for the coyote and give it your image as texture. Make sure the texture coordinates are set to UV and the texture affects the alpha channel of the material. Go to the material settings, enable transparency and set the alpha value to 0. Then activate alpha sorting. Do that for both the coyote body and the fringe.

You can also join both meshes (select both and press [Ctrl+J]) and just use different materials and UV coordinate sets for body and fringe.
Since all these settings are a bit hard to explain without writing a full tutorial, here is the .blend. Just have a look at the materials.

Not the answer you're looking for? Browse other questions tagged mesh texturing uv geometry or ask your own question.

2
Can I fix the alpha display problems on material viewport on new Blender 2.73?

5
Textures appearing different in Edit and Object mode
5
How do I add texture to new faces on an already-textured mesh?
3
copy the size and scale a texture is mapped by, from one object to another
2
Switching between UV maps on a single object
0
How to make an original image texture with transparency in Blender Render?
3
How to add a texture to the emitter surface of a hair particle object (over riding object material)