Weight mirroring fails with a error

Before I continue, I probably should mention that I already have tried copying vertex groups and mirroring there and also mirroring through the weight tools (I believe it's the same thing, but still), have X Mirror option enabled as well (yet it looks like it ignores it for some reason). The model is centered in the scene, everything looks fine, vertex groups names should be fine as well. No idea what's going on there, but whenever I try to copy one vertex group to another Blender hiccups and shows a error, that says: 0 vertices mirrored, 228354 failed.

Here's the file with the problematic mesh: https://drive.google.com/open?id=0B73O5HTSV-kHZ0hldVJ6RDdYMGM

So, as you can tell that last rigging part basically now has killed the whole work I did there. Thanks in advance, kind people, I really hope that some Blender veteran knows what's going on.

The solution for me was to switch to edit mode Tab, select all vertices A, and apply (Snap to Symmetry).

Turns out the mesh itself was unsymmetrical and that caused all problems in the end. The solution was to select all vertices of the mesh in Edit Mode and apply Symmetrize function.

I got a small portion of the mesh mirrored (4723 out of 218908) by checking off All Groups and Topology Weights in the mirror tool options in weight paint mode. 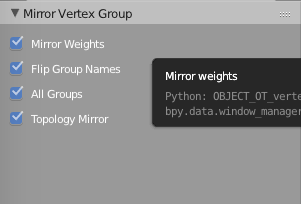 By the way, while the armature object is centred on the x-axis, it isn't fully zeroed out on y and z. That may not matter for mirroring weights, but that could pose problems (no pun intended) if you proxy your rig into another scene file. Also, you might be able to throw a decimate modifier on your mesh and lower the poly count. I tested it on 3 iterations and it looked pretty good still.

Not the answer you're looking for? Browse other questions tagged rigging weight-painting mirror vertex-groups error or ask your own question.

0
what are the requirements for mesh transformation using armatures
0
Skinning rigged model - Fine adjustments in Weight Painting for twisted skin
0
I'm trying to make a vertex group on one side of a model, but the selection keeps mirroring on the other side too. How do I stop this?
0
Weight painting vertex groups not entire object
0
Bones Mirroring Opposite Rotation
1
Weight Painting: Copy/Mirroring
0
Why weight paint is not symmetrical in the mirror plane?