I'm looking for screenshots of node setup that's similar to this tutorial [8:20 into the video]: https://youtu.be/E3zHGD8V2IY?list=PLwv43wkNGxP230lPFcW5t9Yu9AtShPU_Z&t=501

What's an ILM Map: Basically you're using the RGBA as separate maps to read either as light limiters [Colors] or inline drawings [Alpha]. In my case, I'm looking to use ILM Map in this way: Red limits ramp image #1's visibility while lit only; green limits ramp image #2's visibility both lit and unlit [when I paint it near black it permanently unlit though]; blue limits ramp image #3's location while unlit only [like color three is right after 2 in a color ramp]/But in the video blue is treated differently, and thus have nodes I'm not looking for using it. Would help to control #3 like a color ramp slider to know how soon after #2 but wouldn't know if it's really possible.

What do I mean by ramp image? Basically the textures are treated like color ramps, using the same but different colored UVs to represent 3 levels of shadows like seen in Anime with characters having 3 shadows. The thing is that I need to paint the ILM map to limit what I want per color, especially for the third occlusion shadow.

NodeCeption: I can't seem to figure out the right mix node and math and whatnot for them, especially the third image, which needs to appear only when unlit, aka, the third color in the color ramp. I'm at the brink of discovery, but just need a little fix to get to the next level in this anime shading experience.

Hope to hear from someone who has an idea soon! Thank you

PS: I saw this tutorial here but it's heavily dated on how to make texture ramp, but maybe an updated version of it linking each to their respective ILM maps could be possible? Would help a lot to see them in screenshots. Still new to Blender. Is a Toon Ramp material with image textures possible?

This might not be the solution you are looking for, but since you have only 3 levels, I would suggest going about it something like this. You will probably have to adjust the greater than/less than values, and possibly the "shade of grey" in the center of the ColorRamp to match your scene lighting. 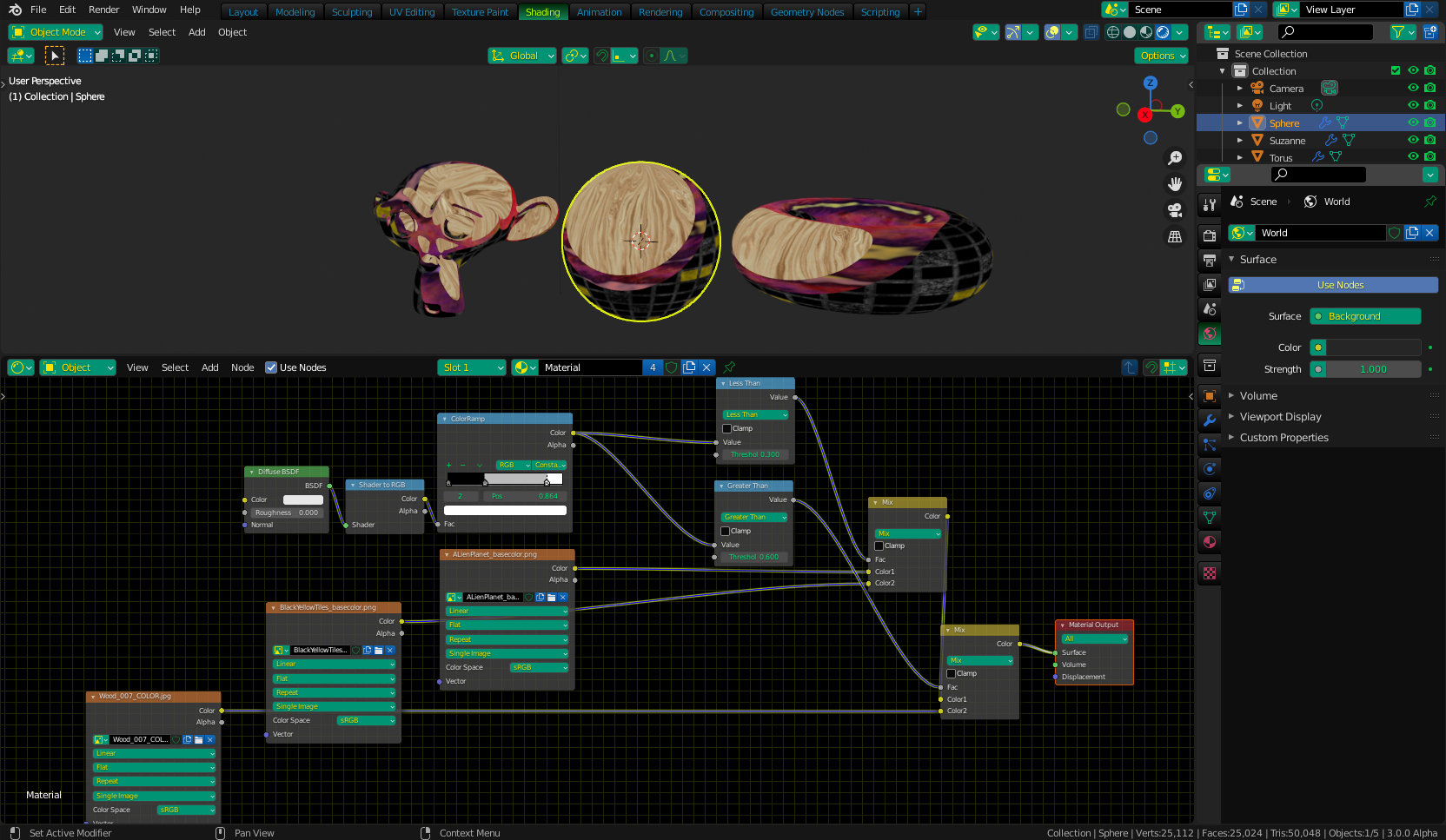 This is just to get the textures representing shadows - if you want the accompanying darkness levels, just multiply the final result by the ColorRamp values: 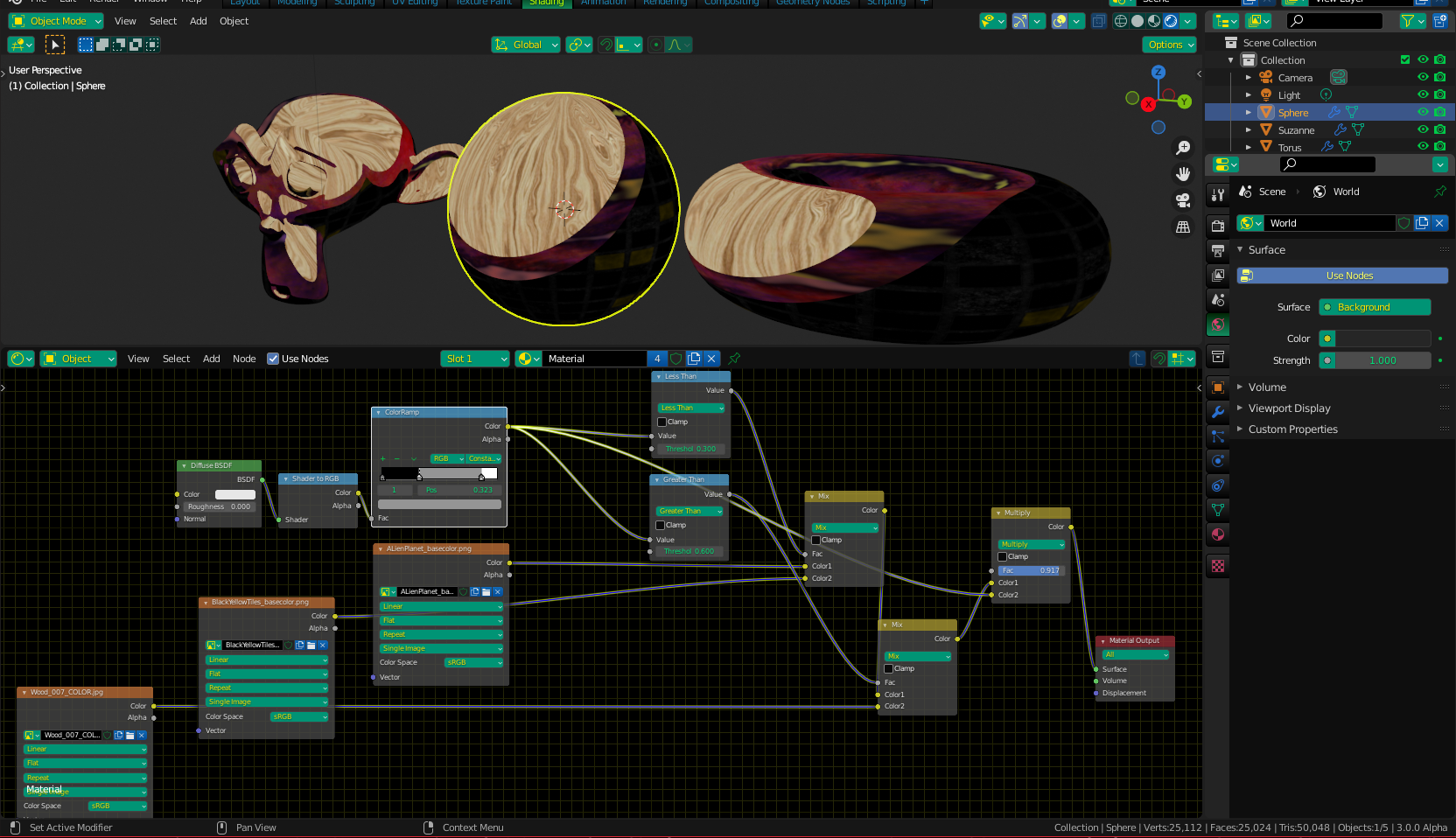 In similar vein to Christopher's solution, you can organize your setup like this:

On second thoughts driving the fields by the swatch colors isn't really useful, because Once you setup the colors, they won't change, unlike their positions.

If you replace the Compare node with Greater Than, then you don't even need the color ramp, and can either regulate the the values on the custom nodes for each step, or use a disconnected color ramp just to drive them (this time not by color but by swatches positions) - add a driver, just right-click the swatch Pos field, Copy as New Driver, then right-click the Driven field, Paste Driver.

Not the answer you're looking for? Browse other questions tagged texturing materials shaders shader-nodes toon-shading or ask your own question.

5
Is a Toon Ramp material with image textures possible?

1
Can I render a normal map into a diffuse texture?
1
How can I get a tinted highlight without tinting the entire piece?
1
Can I bake normals and diffuse to combine in a single image
0
Weird shading when using Cycles rendering
3
Material that receives shadows but no shading
2
Shifting the noise to one end of an object using nodes?