Modeling a twisty tree: How do I twist a beveled curve?

First time posting. I’m a fairly recent 3D NOOB playing around with Element 3D and C4D renderer in After Effects, and I have a project that’s allowing me to dig deeper into Blender. I’m at excited at how 2.8 feels…

I’m trying to model the following tree and I want to make it ‘grow’. 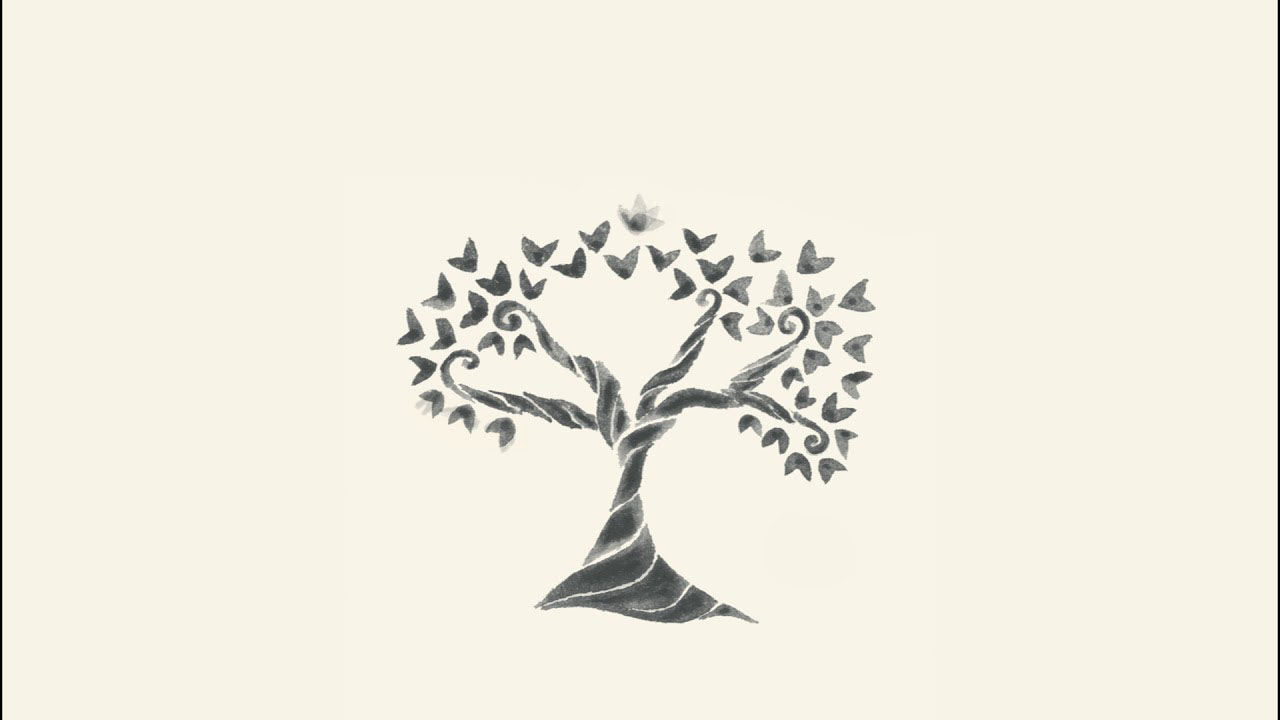 I’ve created a curve with a few points, beveled with a circle, and using a NURBS path to affect the taper. 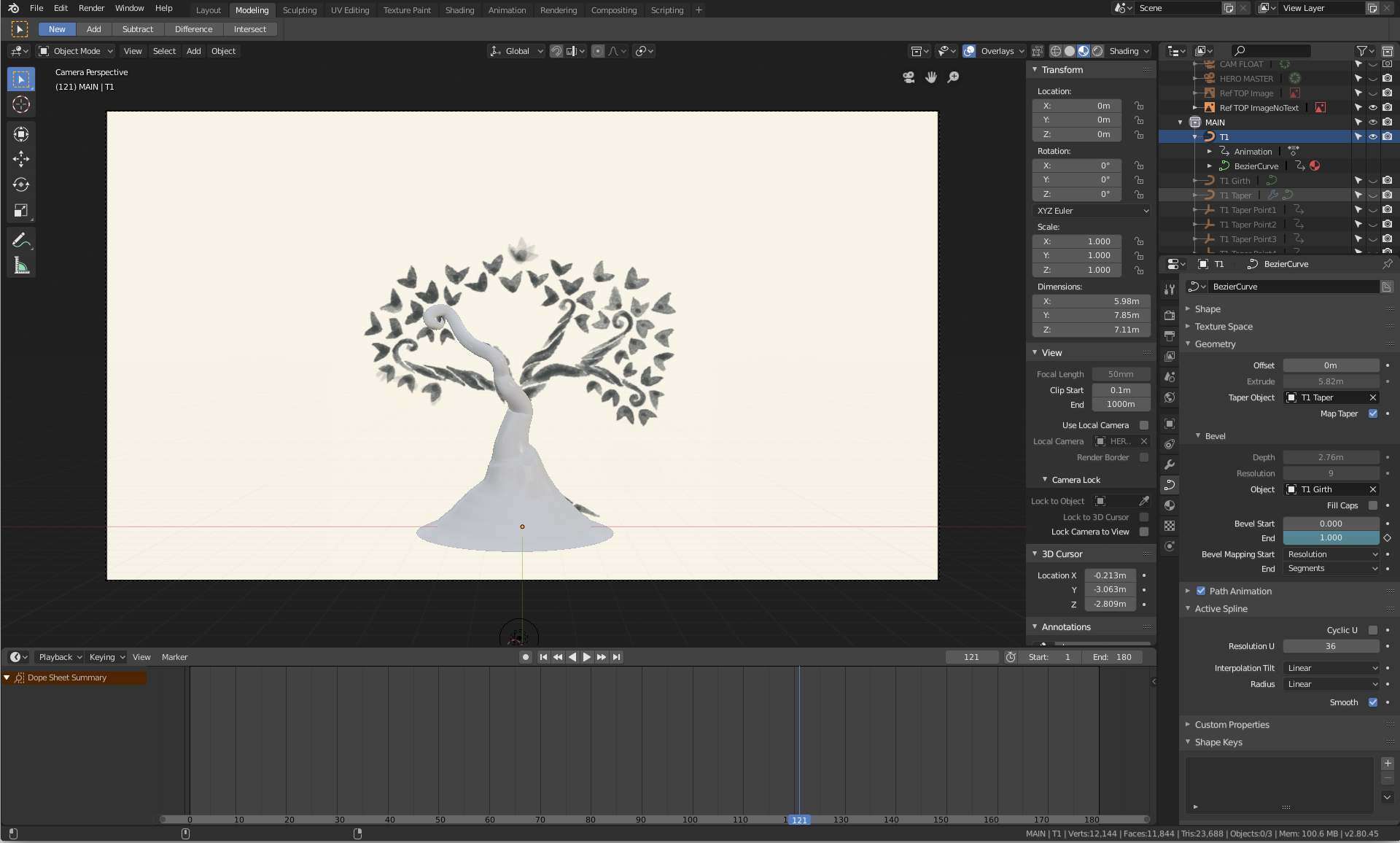 Now I want my tree to look like the drawing, and this real tree, for example, with the whole tree twisting as it grows. 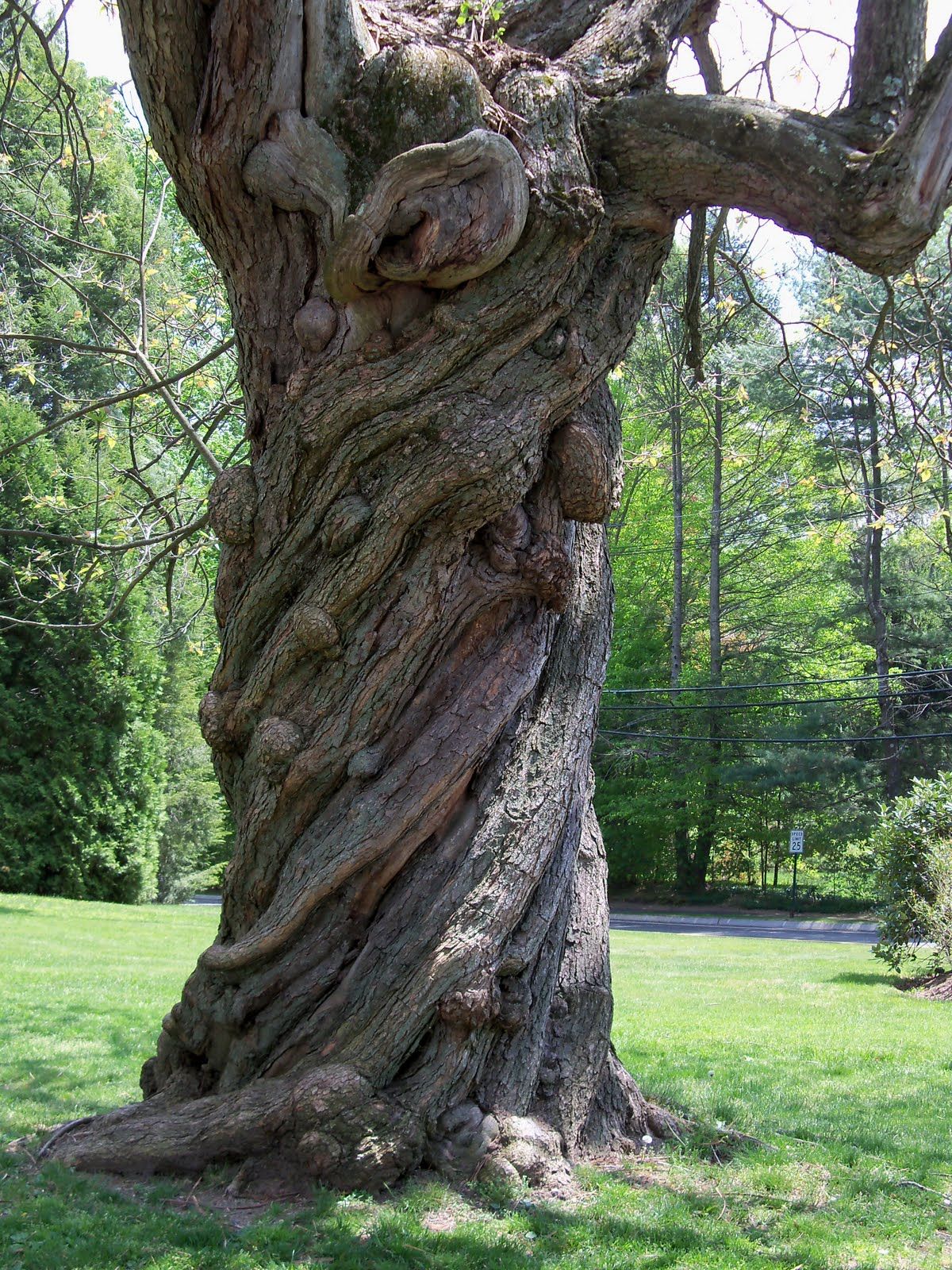 I’ve seen people taking an object, add loop cuts, add a simple deformer and twist. But I would need to convert this beveled curve into a mesh - which then I lose the animation from the keyframed Bevel End point for the growth.

I’ve tried playing with the tilt value of the vertices within the path of the curve. The curve has a total of 8 vertices, so just for example, I added a 360 degree rotation between each vertex, so the last vertex has a ‘twisted’ value of 2520 degrees for the tilt. 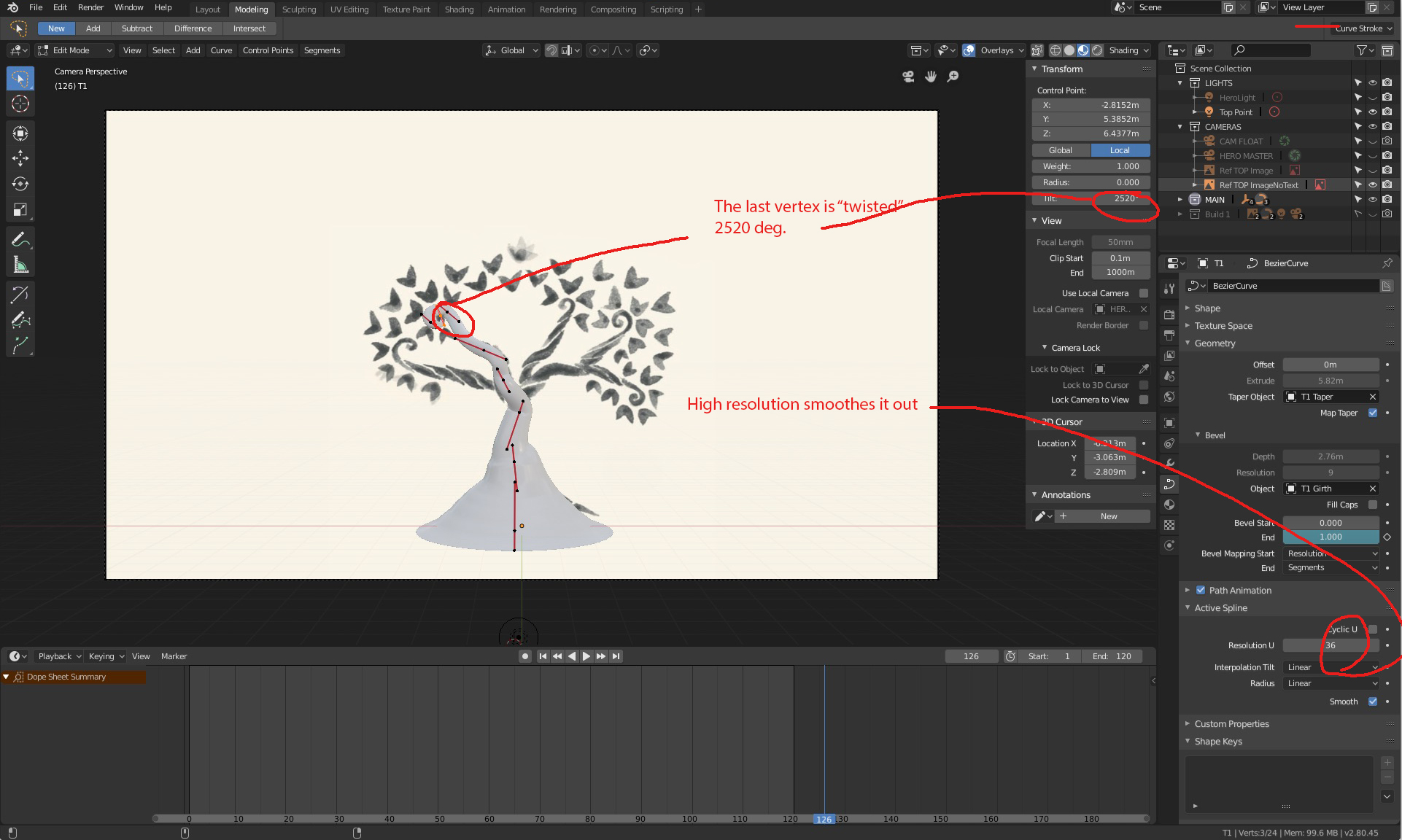 So in theory, the physics of this makes sense, but at a high spline resolution, it doesn’t look like it’s twisting much. If I lower the resolution to 2, i can see the physics of what’s happening, but it’s not quite the look I want.

What approach do I need to take here?

[EDIT] THANK YOU ALL for your suggestions. I'm still having a little trouble getting the hang of proportional selecting, but the combination of that and changing the shape of the sweep got the look I was going for. Thank you again!!

You're actually super close to getting what you want. The default circle shape of bevels just makes it really hard to see. The reason for this is because you're trying to twist a smooth, cylindrical object. Twisting a smooth cylinder results in another smooth cylinder, up until the point where you twist more than the geometry allows, which is what you see in the last gif.

I tried a similar setup but with an irregular shape and it works really well.

As you can see I used less handles, but that doesn't really matter.

I also animated the twist of each handle as I found it gave a nicer result. To find how much you need to twist each handle, think about how many twists you want overall, then divide that by the number of handles. 360 degrees per handle for 8 handles will give you a really twisted tree. The one in your image has more like 3 twists in the full length. In my case I did just over 2 full twists, so each handle was twisted 540 degrees more than the previous one. For your tree, try 90-120 degrees per handle and go from there.

When/if you animate these values, just be aware that because of the magnitude of the values, they will be off screen at first. 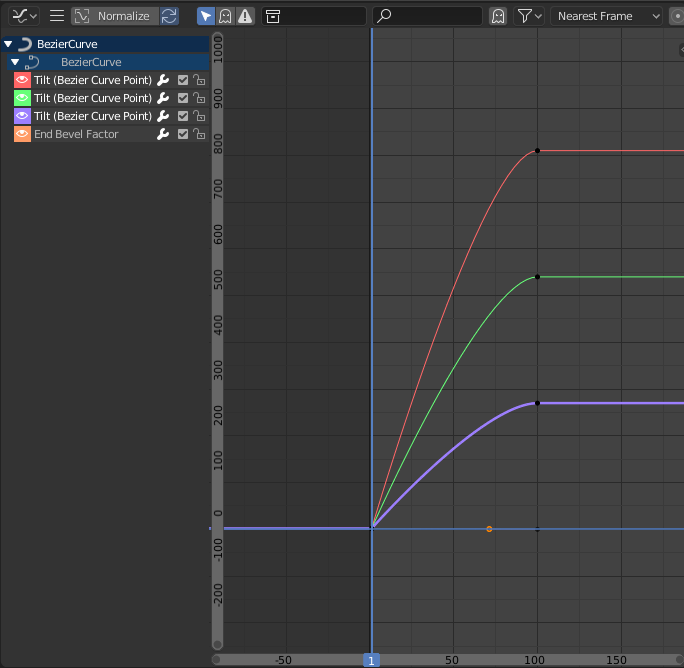 The final animation looks like this. The animations could be better, but the idea is there.

A Tree-Curve is made of:

Now we animate the general thickness by setting two keyframes, one where the circle is small and one, later, where it has a larger diameter. The same goes for the build modifier.

To make adjustments use proportional editing. To add other branches, use the same process but and match the start and size of the growing to the growing of the main branch 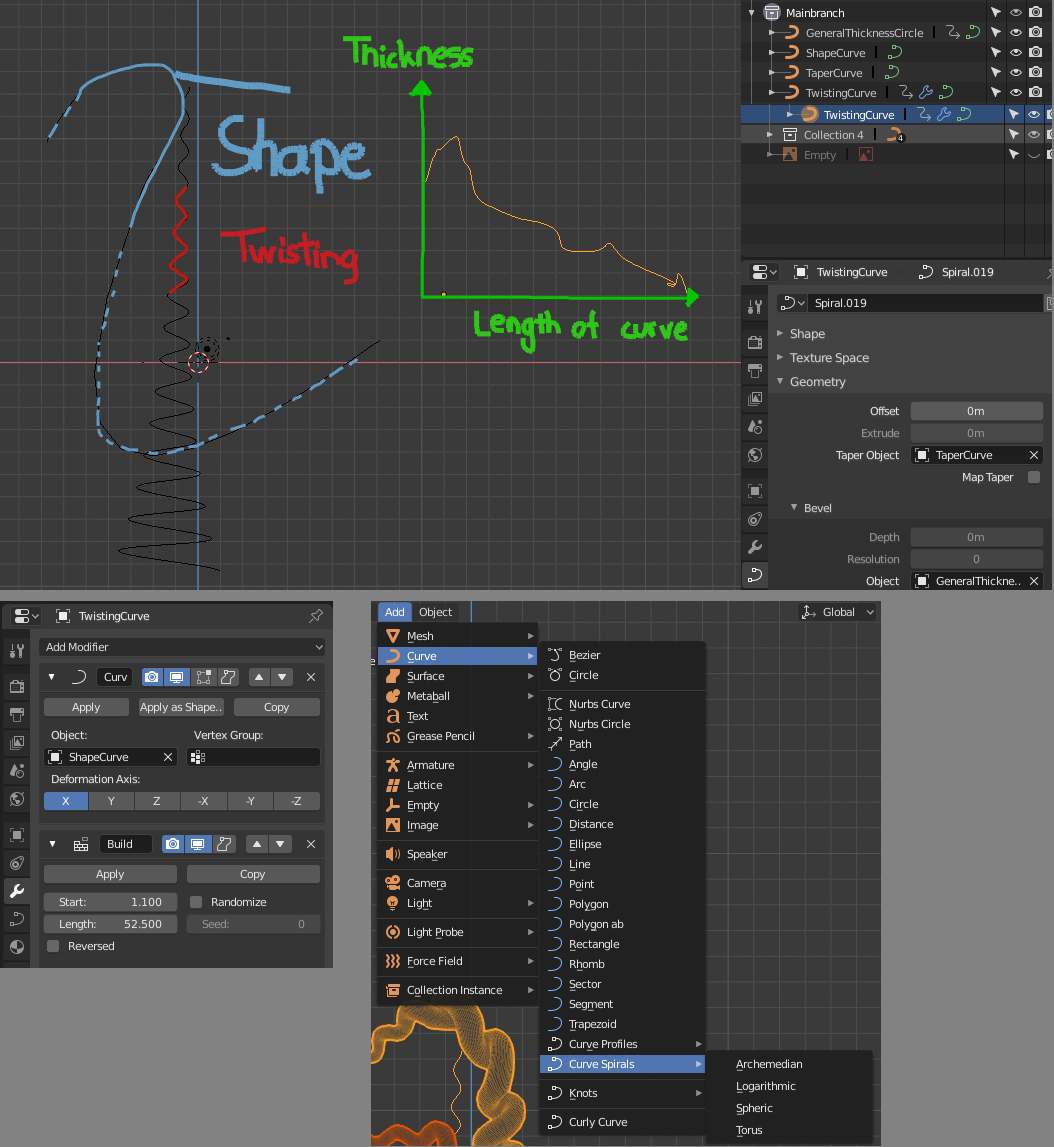 Not the answer you're looking for? Browse other questions tagged modeling bezier-curves bevel or ask your own question.

14
How can I create twisted geometry?
3
Logarithmic curve with spiralling cross-section
0
How to make a rope curving in a certain way
0
Help with adding 'ribbing' to a 3D Modelled horn
1
How to make a stylized low-poly tube tree?

2
Mesh appears smooth, however it is not?
3
Align curve control point tilt with snapping target
2
Creating an bevel inset on an imported SVG
2
New Bevel API - custom curve
0
Why can't I have both clean corners and a clean build for this curve animation?
8
Is there a way to grow this curve at a constant velocity?