I'm having trouble with the proportional editing feature in a project I'm working on. Everything works fine when I do transforms with the grab tool (I can change the editing area using the MMB and everything), but it has no effect when I try to do any rotation or scaling. For example, let's say I want to make a simple hourglass. I add a cylinder, make several loop cuts, and then want to suck in the middle of the cylinder using PEF. I select the middle loop (alt+RMB), turn on proportional editing, adjust the size of my cursor circle with MMB, and scale inward. The scaling only affects that loop. It's as if proportional editing is not turned on.
I just found that if I open a new project, the feature works just fine. Is there an option somewhere I need to change? I'm using Blender v2.72.

Left: what should happen, Right: what does happen 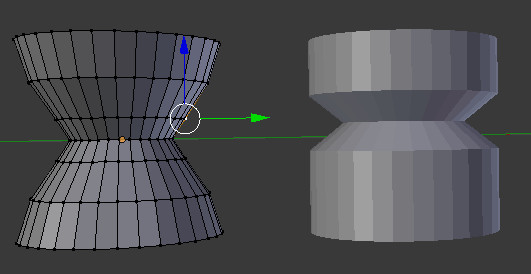 Ok. I seem to have found the problem. The pivot point for rotations/scaling was set to 'individual origins'. If I change it to 'active element' or 'median point' it works as I desire. I don't quite understand why this change makes a difference, but it does. Thanks for the input! And if you know why this change matters, let me know!