Let's say (for the sake of simplicity) that this cube with two blue sides is my character...

and the shape key in question raises a few vertices on top.

Whenever the camera views either Blue side, I'd like the shape key to activate regardless of world orientation through the use of a driver. The problem is, I have no idea how to get values I need (or which values I need to begin with) in order to automate this.

TL;DR - I'd like the mesh of a character I have to deform when viewed from the side much like what was done in Land of the Lustrous 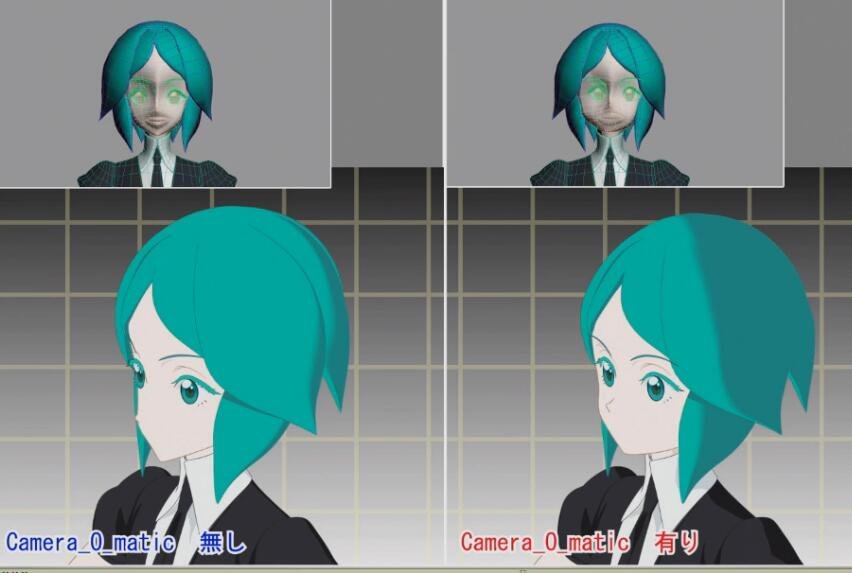 *Note: While I do have some experience with coding, I've never used python. Layman's terms would be greatly appreciated. Thank you for your time!

Would it be possible to have this script work with multiple characters on the same camera? Let's say I have character "Cube2" with shape key "Key 2", would simply adding variables like below accomplish this?

This answer targets a beginners level and will include lots of lengthy explanations.

I understand that this answer doesn't utilize drivers as requested, but for this example a simple python script is very easy to produce and maintain, which is why I wanted to add this method.

A slight problem is, that a change of position implies a change of viewing angle with perspective cameras. In the next image there is no difference between both objects orientation, but through the camera, the objects appear clearly at an angle.

I would use a script which check's the camera's and object's transformations on each scene update.

Let's start with a condensed example. Create a camera Camera and a mesh Cube. Then add the Basis shapekey and a Key 1 key, very similiar to the setup in the question.

Paste the following python script in the text editor and click the Run Script button. I have made an effort to document it well.

The result of the above script is an interactive handler, which update the shapekey value, based on the relative position between the object and the camera.

In the next step, we'll chose the value, which we want to influence the shapekey: the difference between camera and object orientation. Once we have the object's matrix in camera space, we can ignore whatever values were on the camera, since they have been transfered to the object. Only change the code of the drive_shapekey method and leave the other lines intact. In this sample, we use the rotation value of the transformed object matrix by compared a vector with its rotated counterpart.

Result of the change in the script.

Now we have to fix the rotational offset of the camera. The shapekey should extend if the camera faces the blue face. We'll compare the (transformed) vectors which we want to align. At the top of the script import the math module as well.
import math
Then turn on the axes on the objects, and choose two axes which you want to align. In my case it's the camera's negative Z (0, 0, -1) and the object's positive Y (0, 1, 0).

The difference in initial orientation has been taken into account.

Next we are going to add the positional relation to the script. Previously, we compare a camera related vector, but now we need to compare a camera-object relation vector (on the right side). 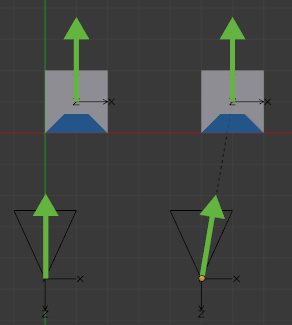 In our case, the needed vector pointing from the camera to the object is simply the object's location (normalized). This is because the camera is at (0, 0, 0), since we earlier applied the camera's world matrix to the object and we're in camera-relative space from then on.

Now, the dot product is only 1 if the object is actually facing the camera from any position.

As suggest in the comments by batFINGER: Checking for the name in the second line from the end will prevent other handler to get removed.

There seems to be the need to control shapekey on multiple object (as seen in the question's edit). This isn't that difficult if the parameters are properly understood.

The lookup up name in the key_blocks 'Key 1' is simply the name of the shapekey on the object. If your shapekey has a different name, the code should be changed accordingly.

The next codeblock will update the cameraFacingKey shapekey on multiple objects: Cube and otherCube using a single method. It relies on both of them having the same shapekey name. The import and handler statements shouldn't be changed. This code creates python list with a list comprehension. In the drive_shapekey(scene) method it loops over all objects in the objs list.

Using drivers you can get almost every property value from an object, so you could combine them in order obtain the relative orientation between the faces from the mutual object's rotations or position...

I think the easiest way to approach the problem is to take advantage of the Rotational Difference driver variable type, so we don't have to worry too much about the math.

Create the shape keys for the object and add a driver to the Factor value using the sin() function to parametrize the mutual bones rotation values between 1 and -1 like shown below: 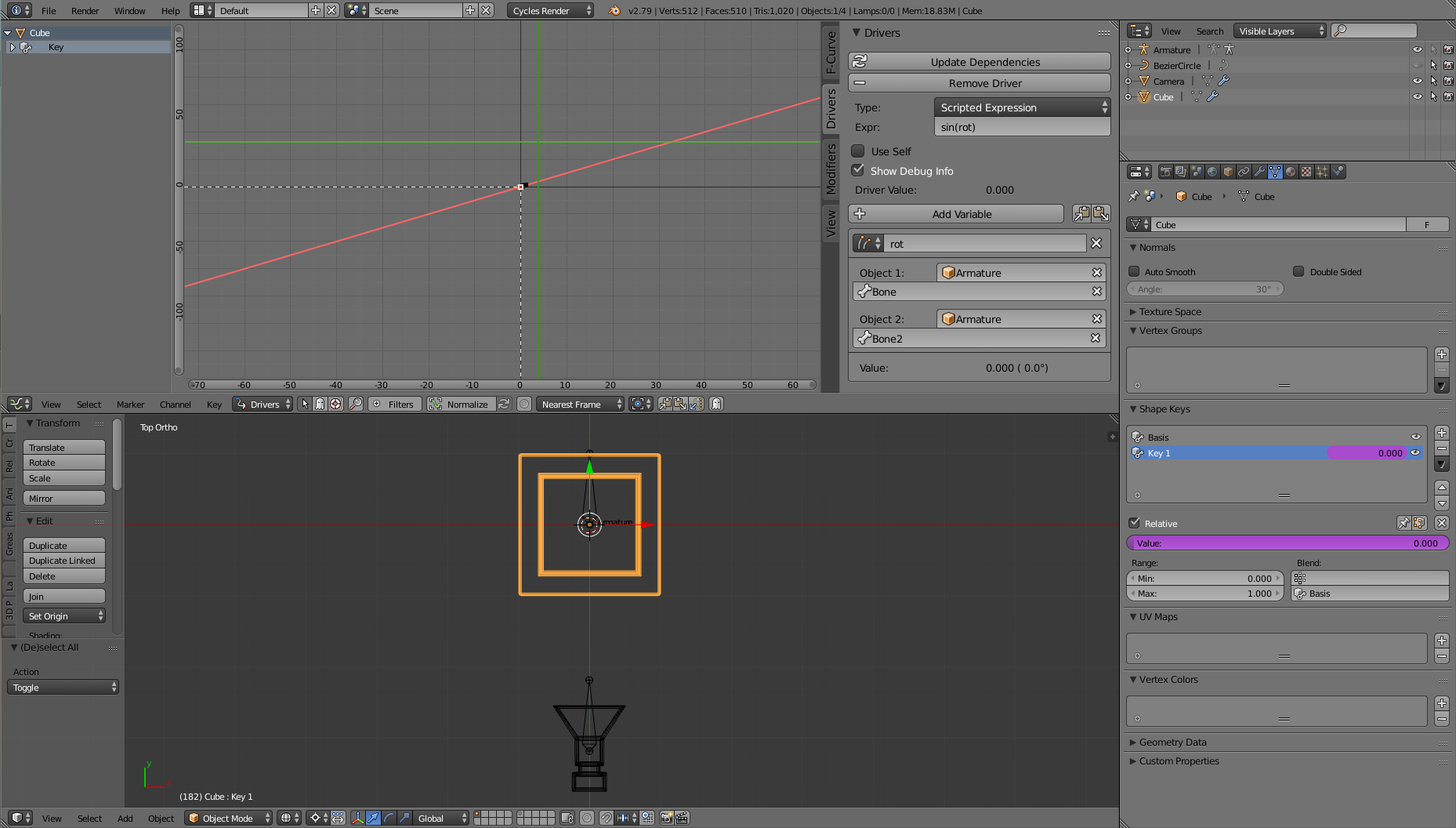 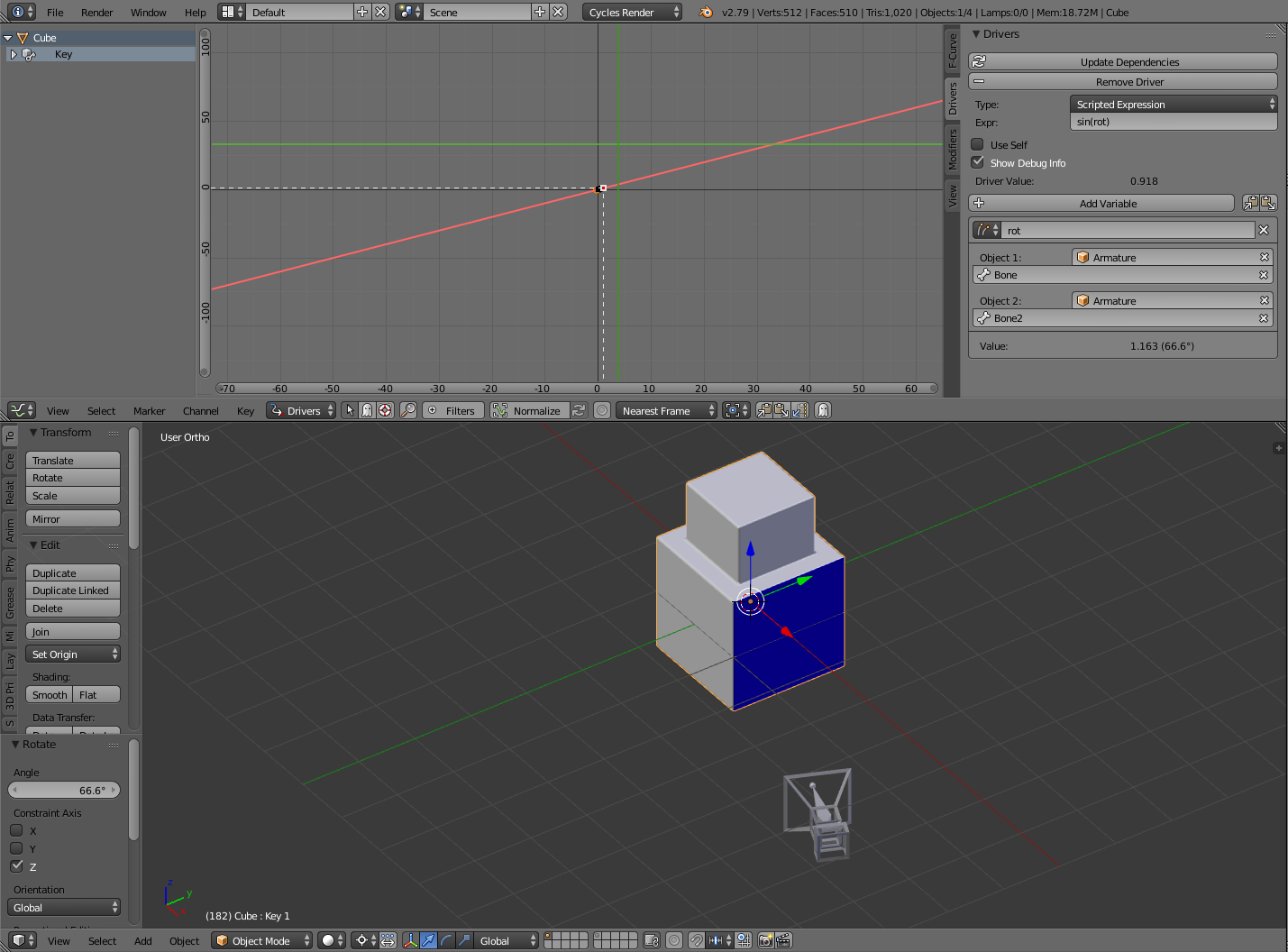 Here's the setup in action and the blendfile for inspection:

Using the methods outlined in Left / Right Test Purely checks to see if camera is on left or right of an object, where local z is up and y is forward.

Result where shapekey is a simple 2x z scaling.

Copy the script below, paste in text editor and run script to register the driver.

In the shape key of the object you wish to drive, type in

the hash "#" signals to blender that this is a python driver expression.

to drive that shapekey based on the left or right-ness of the object named "Cube" to the scene's camera.

My answer is similar to Carlos. It includes some improvements in order to address issues with the rotational difference driver type, which does not just give a straight angle like I expected :)

Even though I'm doing this with bones, I think that the better way to do this is with a script that measures the dot product between two vectors, and I hope somebody will come along and show us that script. I don't do Python yet myself.

Okay, start by parenting your shapekeyed mesh to an empty or something. We'll call this the global parent. This will help us avoid dependency issues.

Next, create a new armature with 4 bones, located at the center of our cube and parented to global parent. The four bones are baseline and track (root bones), axis and measure (both parented to baseline.) The important things here are the tails and axes; baseline and track need to be coincident with identical roll, and axis and measure need to be coincident with identical roll, in a position orthogonal to baseline/track.

Here's a picture of my armature in pose mode, with an offset copy in edit mode: 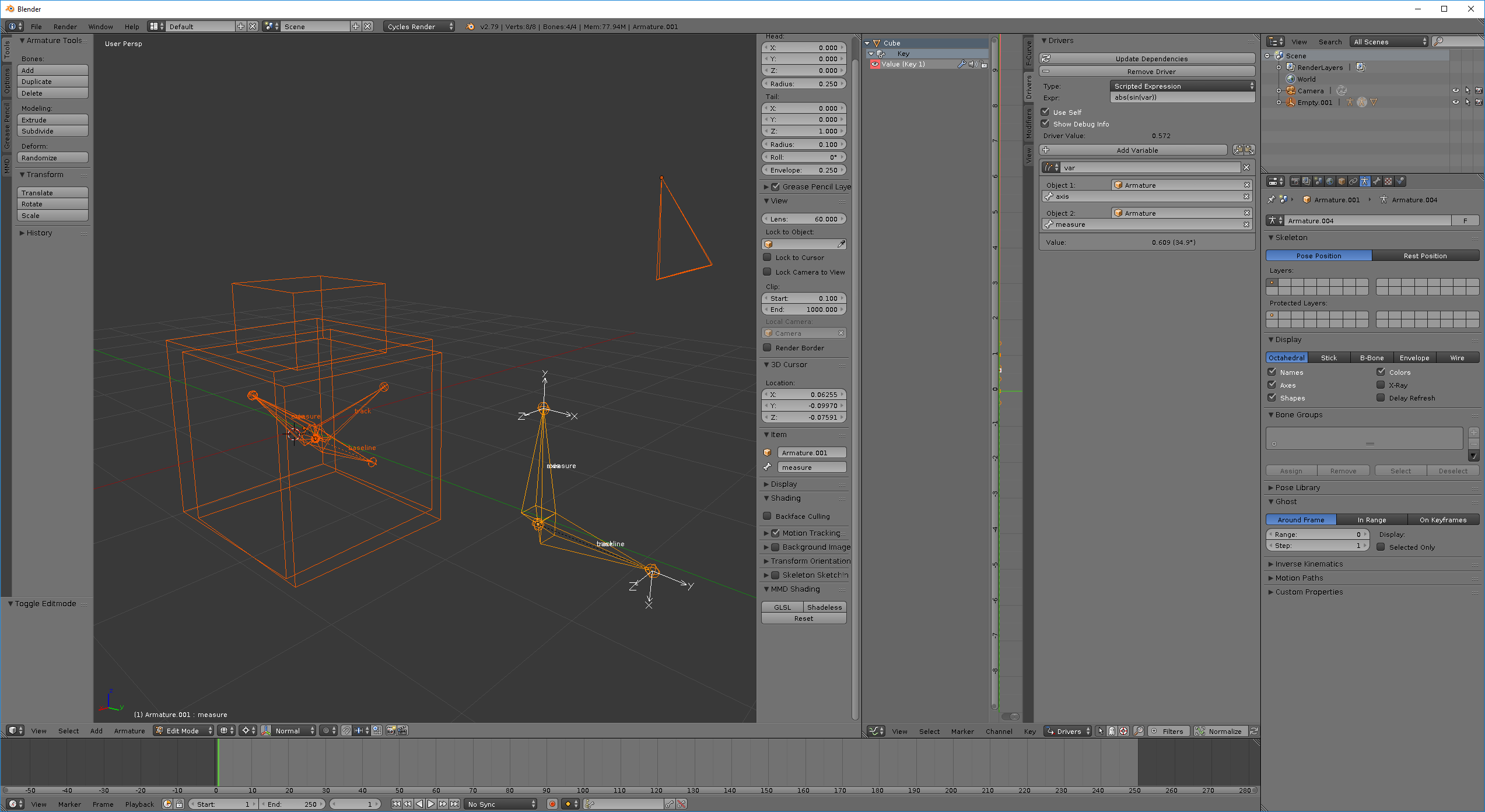 Next we need constraints for these. Track bone will track the camera, so we'll give it a damped track (Y axis) to the camera. Axis needs to remain orthogonal to both track and baseline, so we'll do this by giving a locked track on our baseline bone, locking Y and pointing -z to the track bone. Axis bone itself gets no constraints. Finally, the measure bone gets a locked track, locking its Y and pointing its -Z at the tail of the track bone.

Time for our driver. We want the shapekey at its maximum when the angle is at 0 degrees (0 radians) or 180 degrees (pi radians), and we want the shapekey in the range of 0-1. You haven't specified a response curve that you'd like from this, so we'll use a sine wave, because that's easy. If we use abs(sin(var)) here, it will give us a smooth curve that behaves as we'd like. Note that the exact driver is visible in the picture above.

Not the answer you're looking for? Browse other questions tagged drivers shape-keys properties or ask your own question.

0
Animation/position of vertices or faces controlled by another object's position relative to it
1
Front view and side view
3
Use an object change to trigger Python script
2
Left/Right Test
2
How should I update a script to 2.8 that uses the removed 'scene_update_pre' handler?
0
How to drive multiple shape keys based on relative camera position?