How to randomize window lighting on skyscrapers without separating each window into a separate object?

Ultimately I want to make a city of these skyscrapers, so I imagine it would be computationally way more expensive to have to separate each window into its own object (not to mention annoying having so many objects in the outline editor).

Assuming your windows are fairly regularly spaced you can separate the individual 'windows' in the window material by using a Modulo function to convert each of the X,Y,Z Object coordinates into a 'stepped' function. This separates the surface into individual 'cells'. By carefully setting the spacing of the 'cells' (the Modulo functions) to match the positions of the windows you can ensure each 'window' has a consistent solid illumination.

The 'stepped' coordinates are then randomized via a Noise texture and Greater Than used to illuminate only those above a threshold (higher threshold results in fewer 'lit' windows).

Further combine the Object Info 'Random' property into the coordinates (multiplied by a suitable amount so as to make the different objects wildly different) and you have random 'cells' per "building". 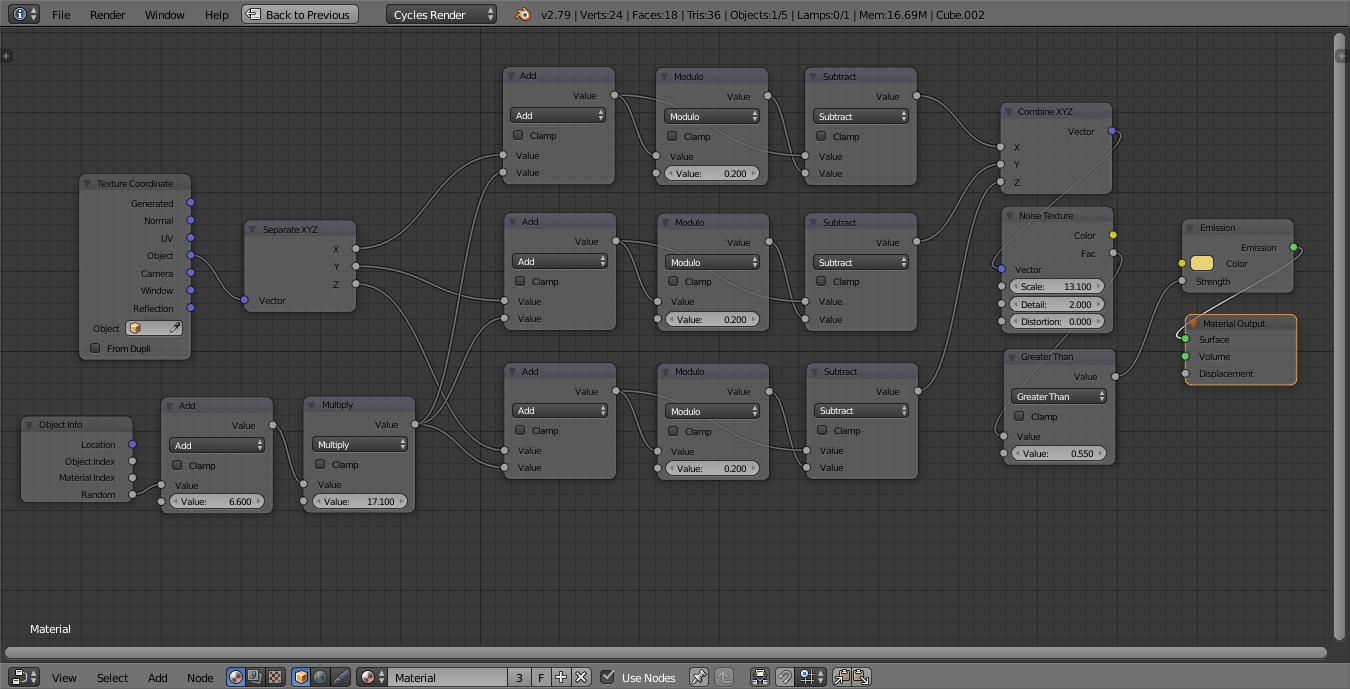 With the following result (this is showing the 'lights' only - obviously the surrounding building needs to also be included in your final mesh) : 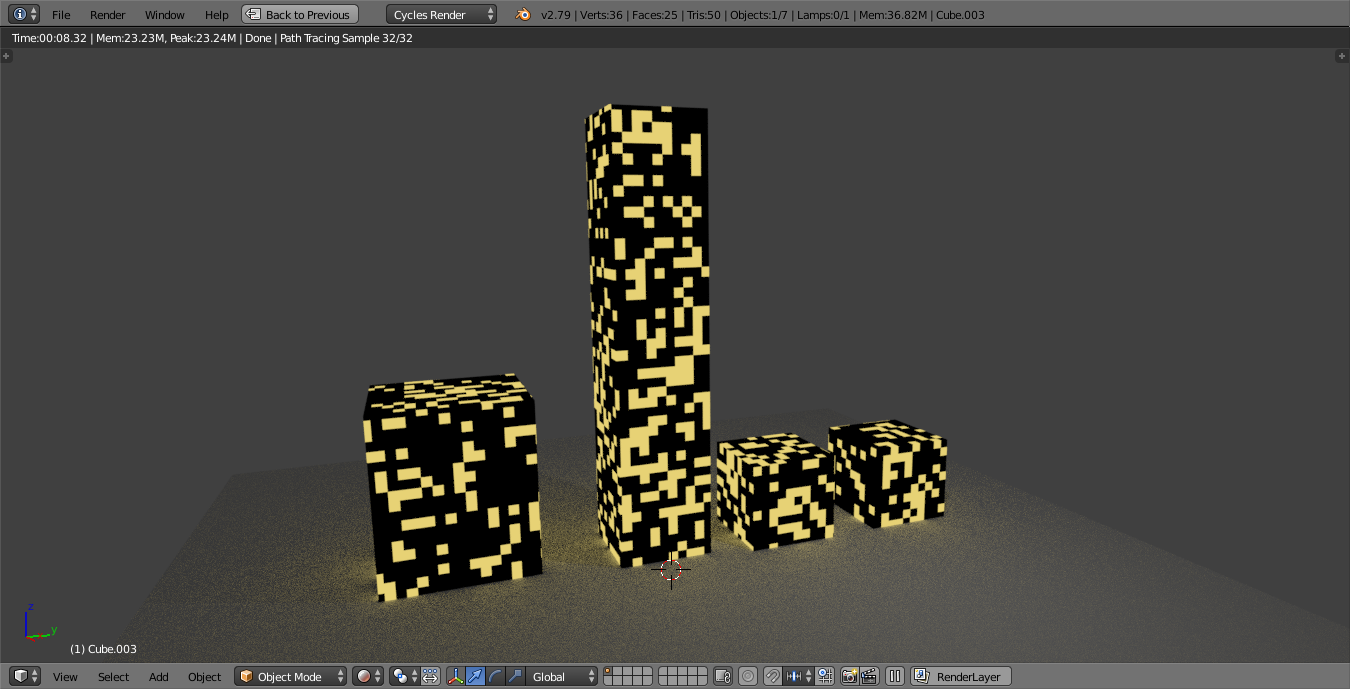 Note : Don't forget to Apply Scale so that the lighting 'cells' are the same dimensions over each object.

For less regularly spaced 'windows' you will need to adjust the Maths nodes to produce the required arrangement of 'window cells'.

There is another way, borrowing a technique used in Per face vertex coloring - essentially to create a UV map where each face is represented by only one pixel in the image. This UV map can then be used as coordinates in the noise texture used to determine whether each 'window' is illuminated.

There are two ways of achieving this :

Paste the following script into a Text Editor window :

Select your 'windows' object (with one face per window) and click 'Run Script'. This will generate a new UV map with 1 pixel per face.

Then in the UV Editor select all the faces, ensure 'Individual Origins' transformation mode is set and scale to zero (Select all (A) then scale to zero with S0Enter). This should produce the following result : 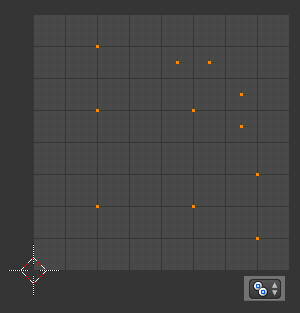 Note how each face has become a single point in the UV.

You can now use the UV Map (whether created manually or via the above unwrapping method) in the following material :

The Add and Multiply adjust the 'Random' object info value to adjust the noise for each separate mesh (building) - you can adjust those to get different random patterns. Adjust the Greater Than node to affect the threshold for which windows are illuminated for more/fewer lights.

You can go much farther than merely making randomly colored squares on the outside of the building -- with OSL, you can make those squares have the appearance of interior rooms (with parallax), and this basic technique is used all the time in movie VFX.

Code and description of a shader that implements this kind of technique can be found here (the link is for 3DSMax, but it's just an OSL shader that I'm sure can also be used for Blender/Cycles):

Not the answer you're looking for? Browse other questions tagged texturing materials objects windows procedural or ask your own question.

-2
How to emit light from texture?
11
Is there a way to add fake thickness to an alpha image texture?
2
Per face vertex coloring

1
Is there a way to separate colors from chained mix rgb nodes?
2
Use all Objects in a Group as Object input (Animation Nodes)
1
Python: Selecting vertices and separating them into new object
2
Animation Nodes : How to add/replace “Get list element” output into a new collection?
1
Can you perfectly line up one object with an array modifier with another object that has an array modifier?
5
How would I vary the emitted color of a 'window' (face) on a mesh?
2
How can I have multiple separate texture maps for separate objects? Is it possible?