I smart UV projected a model of the monkey head after subdividing it 5 times and lightly sculpting on it, then baked the normal data based on the multires, but all I get is a flat normal map texture with no directional normal data. How do I fix this?

Baking normal map from Multiresolution modifier data relies on the difference between the viewport number of Multires subdivisions and the highest level it was subdivided to: 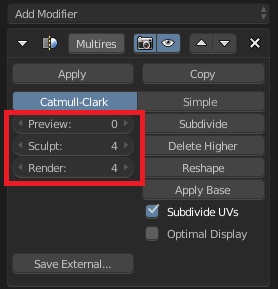 The higher difference in these numbers is (Viewport vs. highest from Sculpt / Render), the stronger effect of the resulting normal map will be.

If your normal map is very light or flat then probably Preview level is set to the same one as Sculpt or Render is. Set it to lower number and choose how much of the normals change you want to bake.

Note that baked normal map should be applied to the low-poly mesh with the same amount of geometry as the mesh had with the chosen Preview level of the Multires modifier.

Not the answer you're looking for? Browse other questions tagged sculpting normal-map multiresolution or ask your own question.