Why is rigged car's XYZ location different from its physical XYZ?

I just rigged a car (following WannabeExpert's DVD tutorial). And have a weird issue.

When I move the car, its root bone's location says it's 40m away from the center. However, its real distance is about 12m. And it just scales up when I move further (E.g. it says 140m when it's 45m away etc.). 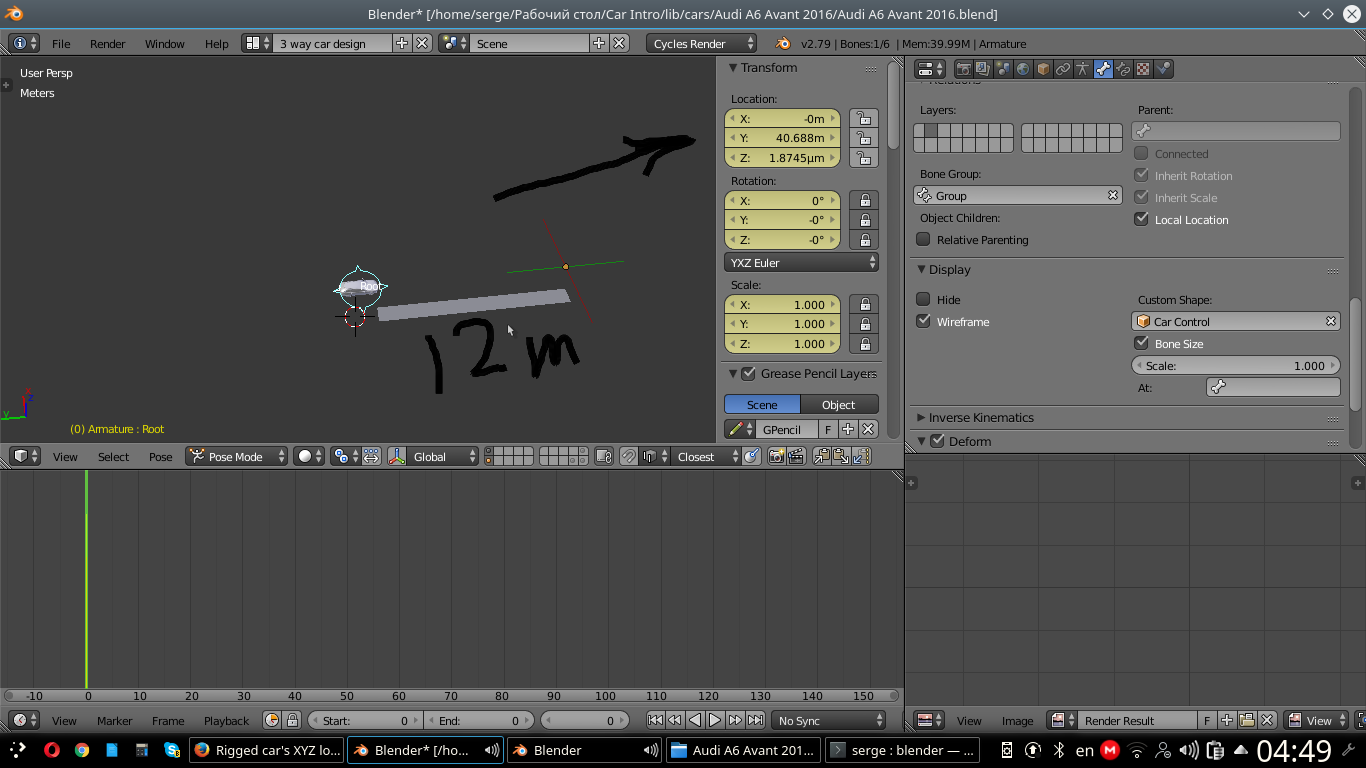 I thought I missed some checkbox or something, so in a new file, I made a starter cube with a single bone. And when I move it, it also has inaccurate coordinates (e.g. it's 60m away, but says it's 87m away).

Don't think it's because of the size of the bone, as there's no way the bone is big enough to make such a big difference.

Perhaps it's worth mentioning that when I apply a "distance constraint" to the bone, it calculates the distance from the center correctly. However, it's odd to use such monkey-patch.

I did apply the scale.

It's because your model and/or your Armature hasn't "applied" their scale. It's always a good practice, at the end of the modelling stage, to apply rotation and scale to every object, so that rotation results in 0,0,0 and scale 1,1,1.

To do it, select an object and press Ctrl+A, then choose rotation and scale.

After you correctly applied rot and scale to both mesh and armature, you can establish their armature parentship, and you will have correct measurements.

I made the rigging from scratch a couple times, and it solved it.

Redoing the rigging also solves a couple other weird problems (that all seem as if I didn't apply the default scale/rotation when I know I did).

I could assume it's some Blender's internal problem. Luckily 2.8 is on its way.

So... Yeah, if anyone has this problem (in 2.79) just recreate the master bone and link the library again. Sometimes you have to reopen all blender files too (perhaps because of some caching mechanism).

Not the answer you're looking for? Browse other questions tagged rigging objects transforms or ask your own question.

5
Rigging a Pac-Man-like character
2
How to add “celestial objects” (extremely distant images) that behave correctly
1
How Do I Use a Saved Pose at a New xyz Location?
0
Why does origin point change its location after joining objects?
0
Rig with sticky feet and hands, how do I create arm swings? (ex: playing tennis)
0
Mesh rigged to skeleton deformed in pose
1
why the armature its faded in the outliner?