Rigging a pendant to a breathing nose

I am trying to rig a pendant to a nose. I want to apply wiggle to the nose while nostrils expand and contract, making pendant move at the same time being also affected by physics. I have given two parented bones, one called hook the other drop to the pendant which is comprised of two moving parts. the hook(tours object) is right in the center of where the nose cow piercing should go, the drop is the hanging pendant. I parented the objects to their corresponding bones selecting empty groups. Having the armature in edit mode i've duplicated a bone and extruded it several times around the nostrils. Problems are: bones only rotate in pose mode. When they rotate they don't morph the surface but rather move the entire object and finally the hook and drop bones are parented to a single bone that when other bones move the hook gets left behind because it parent is fare away. Thank you 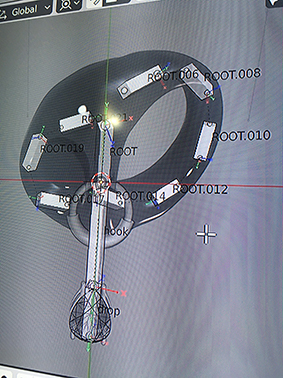 To fix the issue I had with bones not morphing objects surface I simply deleted the armature and added it again and parenting the object to the armature with automatic weights. Regarding the so called hook (which is a torus) I un-parented it but I still have issues leaving it in place

Not the answer you're looking for? Browse other questions tagged rigging soft-body or ask your own question.