I want to add a small moon and a few stars to the background - or at least behind everything, so that it behaves correctly for camera motion.

My animation is technical (think satellite in low earth orbit) so it needs to be fairly accurate. Neil deGrasse Tyson is a major hero of mine. I'll use a normal camera, not orthographic, and I'll use cycles and nodes. I may translate up to 10 blender units and the moon and stars shouldn't move by more than a pixel.

I could make a very very big image and put it very very far away, but is there a better way? I can generate the stars algorithmically if necessary, so that when the camera pans they move correctly.

Can we define a background (e.g. a sky) at infinity? Can we paint (uv map) on to the "Celestial Sphere"? There is some work on Blendertarium (also here) but I'm not sure how to adapt that technique to handle a scene with nearby objects as well. 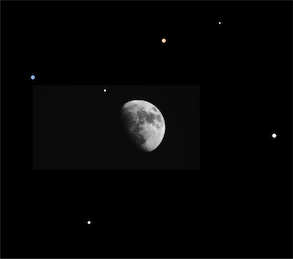 You can make a hemisphere or a sphere(depending on what you want). Then, use a particle system on it. Use a material for the stars, and another one for the half dome. Make the half-dome transparent too, so it wont get in the way of the stars.

Not the answer you're looking for? Browse other questions tagged cycles-render-engine objects nodes world or ask your own question.

13
Add a panoramic background to scene in Cycles
7
Make an object infinitely far away?

14
How to add custom objects to the “add object” menu?
3
Create a plane that always fits the camera viewport
1
Creating a python script that will add objects in fixed time intervals
1
cycles orthographic render with gradient background
0
How to get images to planes objects to receive shadow?
3
How to correctly enable Cycles from add-on?