Fluid Simulation: an object set as outflow doesn't remove all the "water" mesh

I've set up a simple scene with an inflow source and an outflow object that the simulated mesh hits perfectly.
Here's a pic of my domain settings: 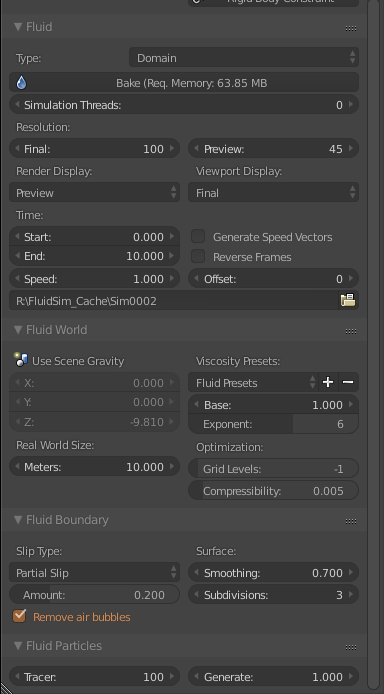 As you can see I'm using Fluid Particles setting but without any particle system outside this option. It gives me a more interesting and realistic result. The problem is this, however the Fluid Particle option gives me the desirable result in mesh definition, it also creates the secondary particle-mesh that doesn't get removed when it hits my outflow mesh and just goes through.
Here's the illustration:

I even created an additional plane, you can see the black outline (it's solid, just set to wireframe render) and made it outflow, thinking that maybe my main mesh has some problems... didn't help.
What do you think is that a bug or I just missed something?

It does seem to be a bug and should be reported. Though it seems that there is currently no one maintaining the elbeem fluid sim code.

A possible work around would be to use a boolean modifier.

Also, using a boolean modifier with a fluid sim mesh will likely really drag down the UI responsiveness.

It's a confirmed bug. Here's a link to the Blender's bug tracker.
https://developer.blender.org/T51759
There's also a patch. According to the patch commit page it's in master, so it should be fixed for the 2.79 release.

Not the answer you're looking for? Browse other questions tagged physics fluid-simulation or ask your own question.