Can't Keep Loop Cut & Slide Where I Want With Measurements

Whenever I'm adding loop cuts to my model, I drag the cut to the edge of the model and type in a value (such as 0.5 meters) and it goes back to the center and works from there..?

I'm pretty sure I'm doing it right, I just want to have exact measurements since I'm making building models and I have a set of guidelines for them all, such as 0.5 meter thick walls, 1 meter wide doorways, 2 meter wide windows and so on. How do I get it to stop A) Snapping the loop cut back to the center when I add one, and B) When I do create loop cuts then it will change how big the rest can be. I want it to just keep loop cutting based off the original face size, not the new faces create by adding the vertices, and I need it to not snap the cuts back to the center, but from the side I drag them to. Sorry if I didn't explain properly, I'll try to explain further if required. Also the shortcuts to work faster would be nice :D https://www.youtube.com/watch?v=rAZ9KEGjSUk&feature=youtu.be <- If you skip to around 5 minutes you'll see him start creating a building, I want to build like that but yeah xD

The loop cut tool or Loop Subdivide as it may be called, is a two step tool that subdivides the chosen edge loop and then starts an Edge Slide.

In the first stage you can use the

MW or numpad-/+ to increase/decrease the number of cuts being made. You can also press E to keep a single loop parallel to the next edge loop and F will flip that to the other side.

For more precise placement of vertices you want to use other tools that allow movement based on global position. The snapping tools make it easy to align items to each other.

When moving vertices and objects you can restrict movement to an axis and enter a distance to move. eg GX0.5 will move the selection 0.5 units on the x axis.

In the mesh display panel which can be found in the properties region N of the 3DView you can display the length of selected edges while editing.

The scene settings allow all sizes to be shown using metric or imperial units rather than an arbitrary unit.

As you are modelling buildings you might be interested in the Archimesh addon which you can download here - this addon has recently been added to the standard addons and will be included in the 2.78 release.

The shortcut for "Loop cut and slide" is Ctrl+R. Use the shortcut (while in edit mode) then hover your mouse over the mesh edges and you will see a pink loop. Left click to apply it, then move the mouse (to slide the loop) and left click to apply again. If you want more options (after doing this) hit T to open toolbox, and you will see more options (see image below). 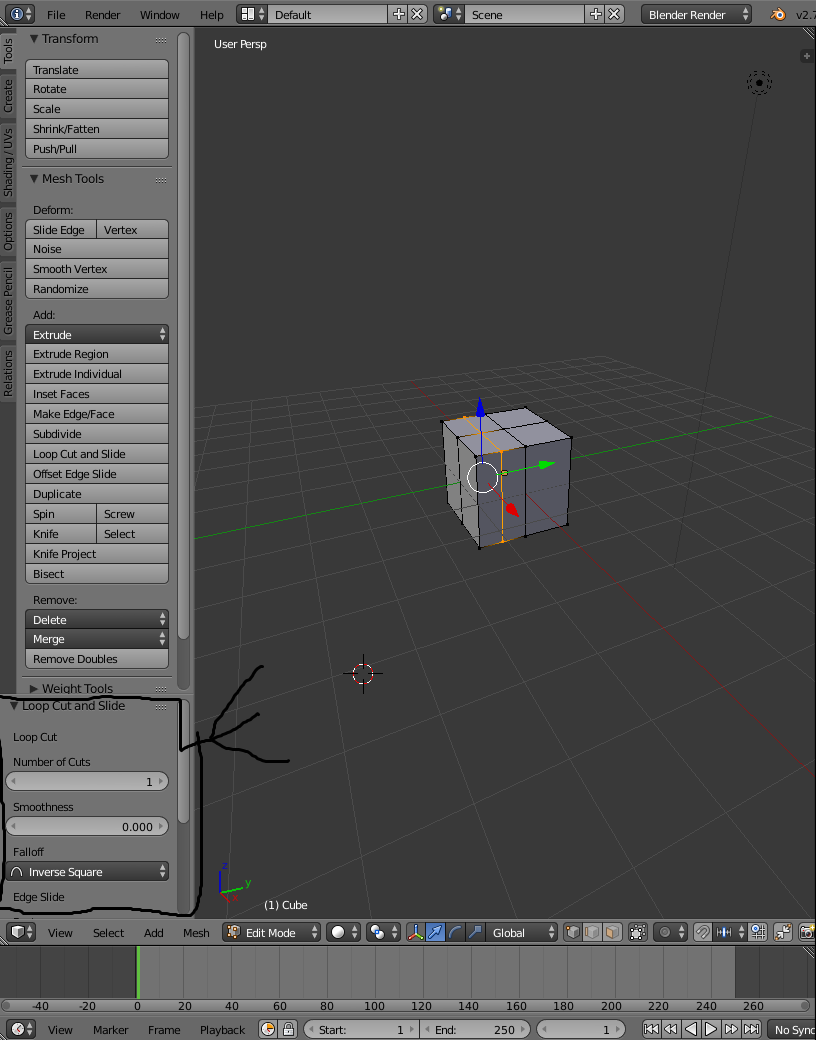 Hope this helps and feel free to ask ;)

Not the answer you're looking for? Browse other questions tagged vertices shortcut faces snapping measurement or ask your own question.

0
Filling large gaps between curved geometry using faces?
0
Connect a loop of edges to a point
0
Snapping to grid get's messed up after scaling down vertexes
0
Loop Cut failing some of the faces
0
"Loop Cut and Slide in blender 2.80 beta?
1
How do I add a curve to a vertex to bend an edge / face