Move an object while connected tubes “follow” it, automatically stretching and shrinking

I have a real-life 3D object placement "problem" and I am wondering if using Blender to help me visualize the scene is a viable option.
I need to manipulate the object's placement (move around) within a given space until I'm satisfied with the placement.

I do not need to get a fully animated interactive game-like thing - just editing objects within Blender will more than do.

The catch is, it is not just moving a box inside another box - I have an irregularly shaped funnel-like space and a multifaceted object that is attached to fixed wall points on opposite sides of the funnel via two flexible "tubes".

The idea is to move the object within the space while the tubes "follow" it, automatically stretching/shrinking. Ideally, it would be possible to detect and correct any "collisions" with the walls, either automatically or using a script or something.

It is not just one-time problem; the object will be the same but the space will be different every time.

So, the question is:
While I do understand that it is possible to create a scene like that in Blender, how practical would that be to use for this purpose?
By practical I mean how easy/hard would it be to manipulate the object and the tubes to fit them into space.

While I don't see a way to automatically detect collisions, I expect some things can make your task fairly easy.

The first task of placing an object within a modelled room is easy. You can use snapping to place a mount point onto the wall. then by 'locking' the right axis of each wall mount you can easily move the mounting around the wall and have it stay on the surface, a small adjustment can be made to transfer it to another wall.

Curves are defined by a number of control points. By adding a bevel to the curve they become "tubes" that automatically flow between each point. 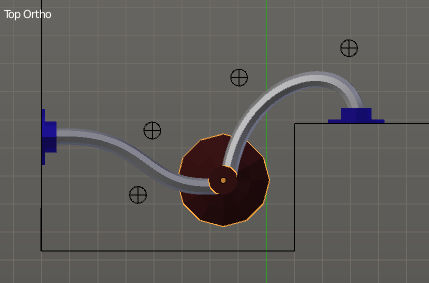 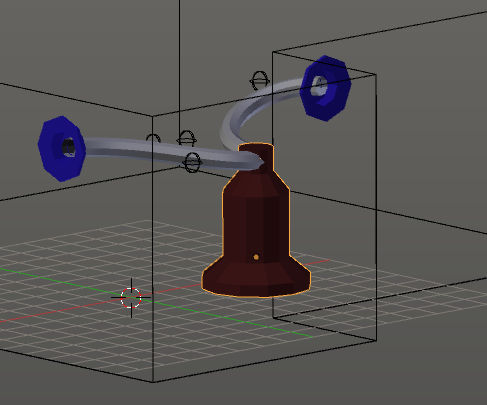 In the following example that I created for the previous screenshots, I have two curves, that go from the wall to a fume extractor. Each curve has two control points to adjust how it flows from the wall to the extractor. For easy viewing the building is set to always draw in wireframe.

To use, you place the mounts on the wall, then position the extractor and then adjust the curves to flow nicely between the two.

While I have used a nurbs path in this example, you can also use bezier curves to get more control over where the curve goes to and how sharply it bends at each point.

Not the answer you're looking for? Browse other questions tagged modeling rigging 3d-view workflow constraints or ask your own question.

4
Automatically “routing” a tube through a confined space

3
How to make easily editable text that acts as texture or normal map for another object?
4
Automatically “routing” a tube through a confined space
1
Can We Make Blender's Island Packing More Space-Efficient When Unwrapping?
2
Limit Possible Bone Location Within Custom Object
1
NOOB: What method for constraining?