Why is my Shadow Catcher layer shadow-pass entirely black? 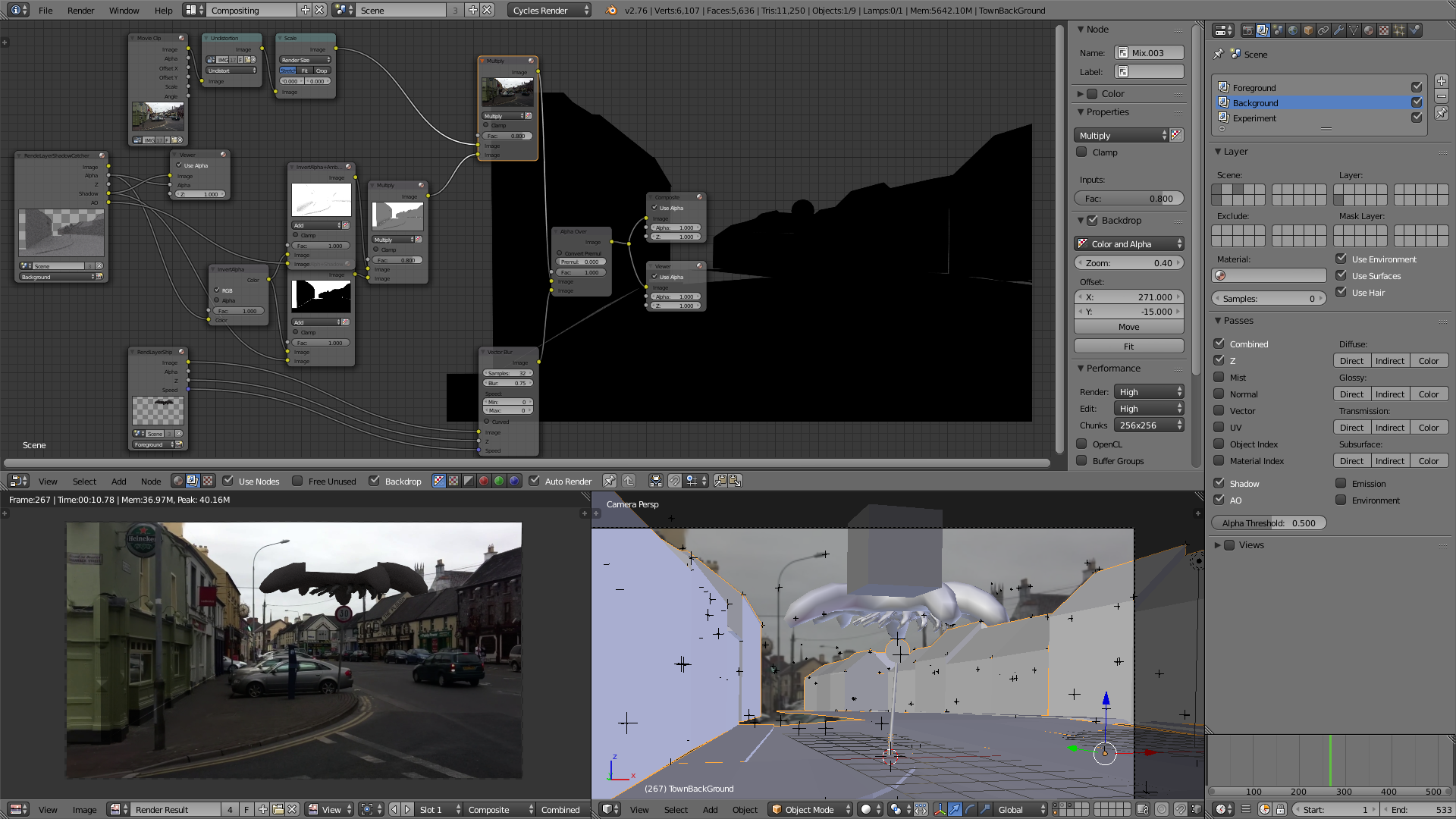 Using the standard layers / compositor setup created with the Setup Tracking Scene button (in Cycles), I've used the second layer 'Background' to build a rough mockup of the street in order to act as a shadow catcher. However:

1) The shadow-pass for this layer is always entirely black. Is that correct? If not, how do I correct it?

2) With default settings, the shadowcatcher model darkens EVERYTHING it covers in the render, whether a shadow is cast there or not. I imagined that shadowcatcher layers should ONLY darken the movieclip in areas where the foreground layer (the ship model (please ignore the cube!)) is casting a shadow - that's not happening... so how can I achieve that effect?

(Still quite new to this! Please explain like I'm five!)

As Sanix, Marasoftware and Sebastian Kónig point out (https://twitter.com/s_koenig/status/656693360955150336), the Cycles shadow pass does not work with environment texture lighting (nor does it work with mesh lighting), hence my shadow pass was entirely black.

What a brilliant, simple idea! Render the shadow catcher twice, once with shadows from your main object and once without - then subtract the clean shadowcatcher from the shadowed layer, leaving only the shadow behind! (Then use RBG curves or what have you to tweak the darkness of the shadow).

Barring any future mishaps or objections from the community, I'll be using this in from now on.

1) This seems like an insanely useful material for this kind of task in future, though I haven't done all my research on it yet. Could be handy for someone doing a little compositing...

2) Had some trouble with backfaces in my Cycles shadowcaster, this solved my problem. Hope it's of use.

I can't see your whole scene to make sure of this, but the first thing that comes to mind is that your lighting setup isn't done properly. I can see from the top bar that you do have one lamp, but I'm guessing that's just the default one, which doesn't do very much. To test if this is the case, just create a sun lamp and point it straight down, which should get rid of most of the shadows. I've found that using anything but sun lamps often becomes an issue with motion tracking, so before you go into more advanced lighting just put in a sun lamp to make sure that lighting really is the fix for this

Did you add light sources? I get the same effect when I try to render an object without first adding light sources. If you do have light sources, make sure they are positioned correctly.

Not the answer you're looking for? Browse other questions tagged compositing-nodes tracking render-layers layers or ask your own question.

38
How can I make a material only apply to a side of a plane?
30
Cycles: Shadeless "Shadow-catcher" Material for Rendering onto Footage
6
Is there anyway to match a sun lamp to the direction of the sun in an environment map?
1
Transparent shadow catcher under HDRI lighting in Cycles?

2
Glass, transparent to background video
3
Paint over Render in compositor
3
How to set individual shadow catcher objects per render layer
1
Absolute black shadow takes forever to render with custom shadow catcher node
0
How do you create mask and "give it a diffuse shader" in this tutorial?
0
Enable shadow catcher for layers
1
Shadow Catcher, Shadow Rendering Behind Tracked Camera Scene
2
how to have render layer only to render shadow catcher?
1
How to disable Background layer rendering?