How to animate the twisting of a rope?

What is a good reliable method to animate multiple ropes being twisted together? One end of the ropes will be fixed in space, while the other ends rotate in a circle, creating twist. All the ropes should be along the edge of this imaginary circle (none in the middle), and do not come together (the twist moves closer to the ends, and the angle of the ropes between the twist and then end becomes steeper). These ends are separated not together. How can this be animated? Simulations are ideal in this regard, since I may need to twist a considerable number of ropes.

None of these worked very well (maybe I'm doing something wrong).

Here is a video that roughly shows the twisting motion with three ropes.

The twisting ropes is best accomplished using a curve modifier.

Start with a mesh that has a high enough resolution along the length of the "rope". Then create a curve representing one of the twisted ropes plus some untwisted rope leading away. Finally, add a Curve modifier to the rope mesh; choose the guide curve, and set the Deformation Axis to match the helical axis of the guide curve (I used Z for my demo).

In a static situation you will see the rope coiled along part of the curve, and then follow the untwisted part away. Create a 2nd and third copy of the rope mesh and the curve guide to illustrate 3 threads twisting together. For 3 curves you will want to rotate each one by 120 degrees.

In order to animate this, have each guide curve spin on its helical axis. This will appear as three ropes spinning in a partly twisted state. In order to make it seem like the twist is progressing along the ropes, animate the curve to move lengthwise along its helical axis (keyframes for the Z coordinate). The change in the relative position between the mesh and the guide curve causes the mesh to change what part of the curve it follows over time.

You will probably want the fcurves to be linearly interpolated (t in the curves editor) and linearly extrapolated (shift-e).

Unfortunately, the exact geometry of this situation causes the mesh to slide backwards along the curve (because the length of the curve is longer than the axial distance travelled). To compensate, you can animate the mesh to translate in the opposite direction to the curve. 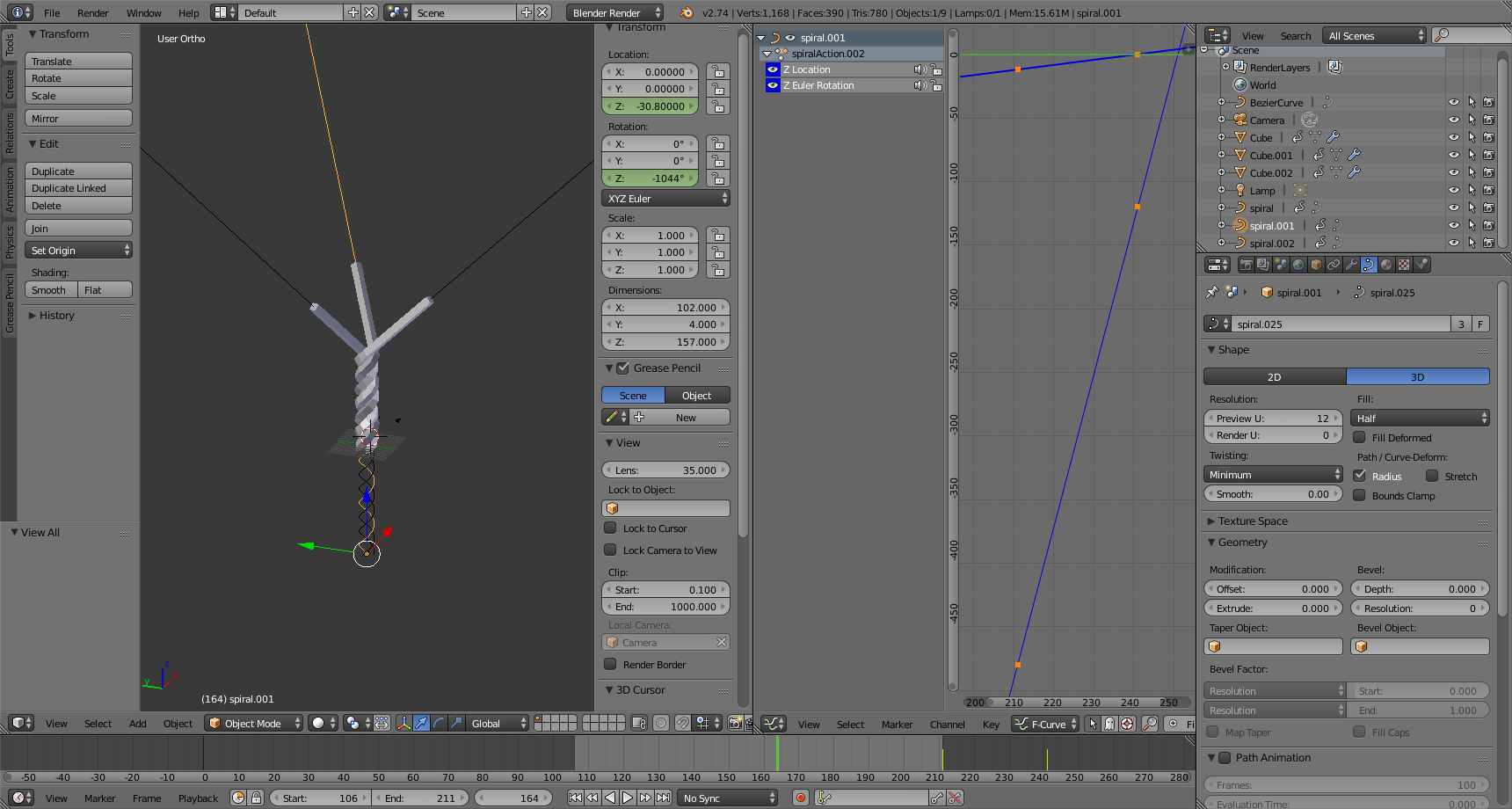 If you don't want to animate the Z location of each of the 3 meshes independently, you can animate a single one and use the Dope Sheet's Action Editor mode to give all of the meshes the same Action datablock which will cause them all to animate identically.

If your guide curve is constructed by python, you should know exactly how much translation represents a full twist of the helix. If not, you can just eyeball it. Again: you will probably want the fcurves to be linearly interpolated and linearly extrapolated.

There is a remaining twisting motion of the thread mesh that you can counteract by animating the rotation of the mesh. You can eyeball this (mostly because I don't know exactly what equations are in play so I can't guide you to a mathematical calculation). Again, you will want to make this linear to match the animation of the guide curves.

The final hairball is keeping the loose ends of the thread at a constant distance from the helical axis. This requires us to animate the SHAPE of the guide curve. This is accomplished using a Hook modifier. The hook modifier can be used on curves and on meshes.

While the hook modifier can bind several vertices or control points to the motion of another object or bone, the simplest situation is to hook a single control point to a single empty.

Select the curve. Switch to Edit mode and select the control point for the loose end. Use Ctrl-h to hook that point to a New Object. Switch back to Object mode.

The curve is still the active object, and the new empty has conveniently been added to the selection. Use Ctrl-p to parent the empty to the curve. This will allow it to rotate with the curve.

Now you must move the empty into position to match whatever frame the "loose" ends of the thread are attached to. Since I chose Z for my helical axis, that means my X and Y will remain fixed. I will animate the Z so that the hooked empty lines up with the end of the rope mesh. You probably want to take care not to keyframe the X and Y position (you can select the unwanted data_paths in the Graph Editor and x to get rid of them if you accidentally create keyframes for X or Y).

(The reason you avoid keyframing X and Y is so you can reuse the animation on the other hook empties. It revolves around the obj.matrix_parent_inverse and could easily become its own essay if I knew what the heck was going on).

At the beginning of the animation the keyframes of the hook empty can be spaced out (1/rotation was fine at the beginning). However, as you reach the end of the animation and the available rope begins to run out, the Z will have to change faster, and non-linearly (I think it ends up being a hyperbola). Just scrub through the time line; adjust the Z coordinate; and insert a keyframe. If you aren't satisfied go ahead and insert more keyframes whenever the hook deviates too far from the end of the rope.

Once you have animated one hook you can repeat the hook-creation procedure to create hooks for the other threads. However you do not have to repeat the keyframing.

Since the hooks are children of the curves, you can reuse the animation datablock. Go into the Dope Sheet and switch it to Action Editor mode while the Empty is the active object. You can use the menu button to pick the action from the previously-animated empty (you might have to select that first empty so you can see its action name in the Action Editor if you did not memorize it). Now the action is shared between those objects. (The NLA editor also has the ability to assign actions to the active object, but as of 2.74 there are bugs in the UI that can confuse novice users). 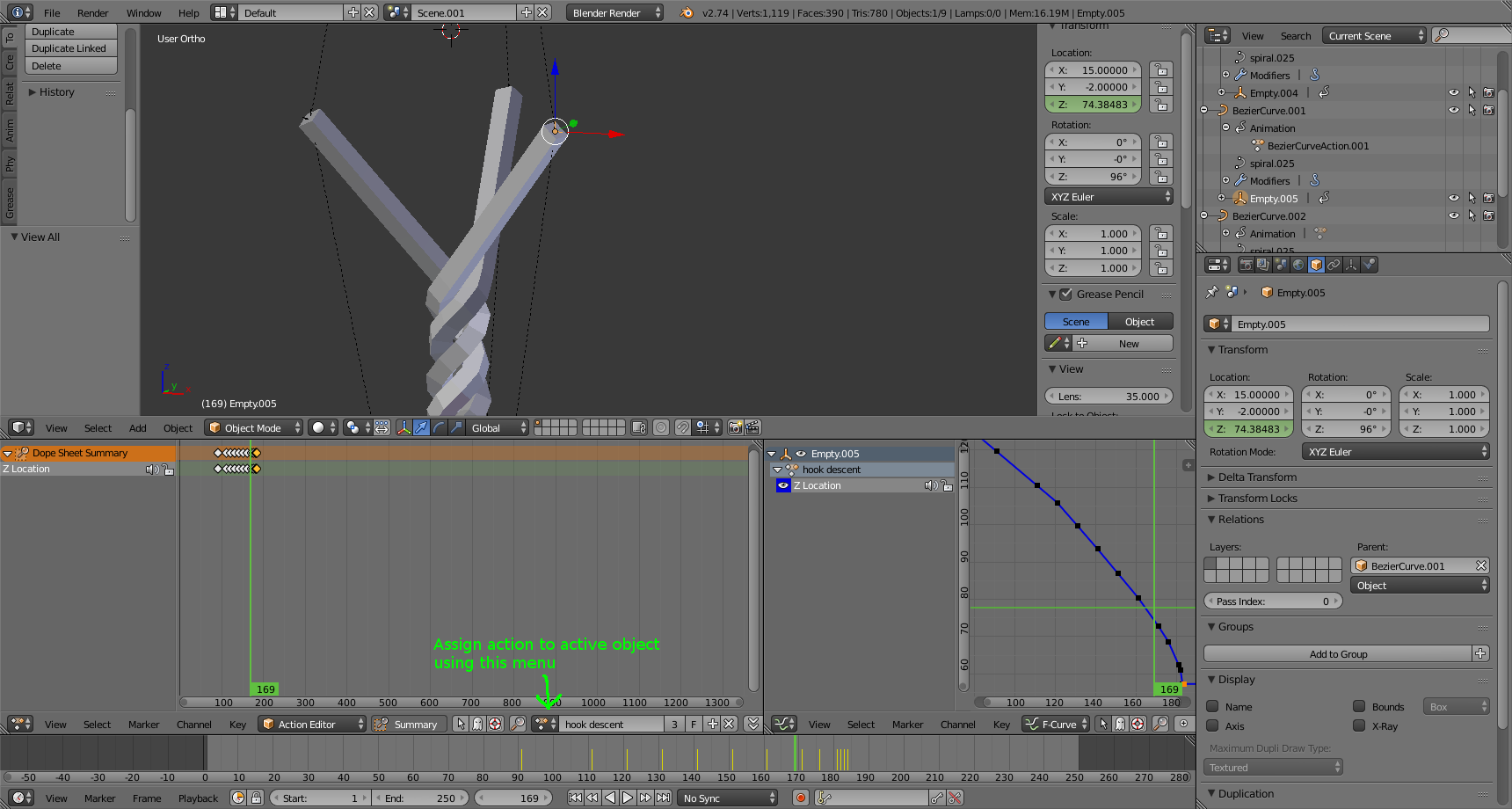 At this point, your twisting ropes should be animating correctly, at least for a certain range of frames.

If you go too early, your ropes will separate because they no longer line up with the helical portion of the guide curve. And if you go too late they "break loose" from the frame and become completely wrapped.

Because I am better at python than hand-modeling, I constructed the curves using the script at http://web.purplefrog.com/~thoth/blender/python-cookbook/spiral-bezier.html . I will include a copy of the python source inline, even though it is only peripherally interesting, and you might need a different shape on your more advanced curves:

This solution works well for twisting, but if you end up needing weaving or any other complex motions, you may need more hooks on the control points of your curves, or resort to more advanced techniques such as a hundred-bone armature chain.

Not the answer you're looking for? Browse other questions tagged animation modifiers rigid-body-simulation cloth-simulation soft-body or ask your own question.

19
How could I animate a plane into a pipe and then a pipe into a torus?
0
How to make realistic looking stitching

5
How to cut the rope?
28
How to simulate a rope?
0
Animate Folding/Twisting Arrows of Recycle Pictogram
2
How to animate paper tissue pulled out from a box?