I'm currently working with the Blender 2.80 beta, and although I can snap the 3d cursor to objects easily, and tweak its precise position with the 3D Cursor UI, I can't figure out how to reset its rotation, because it is not exposed in the UI with the position. Is there a tool or some kind of trick to reset only the rotation?

Also, there is no undo for cursor changes, correct?

You can control the behaviour of the 3D Cursor orientation via the Cursor tool - in early 2.8 builds this was found at the top of the workspace : 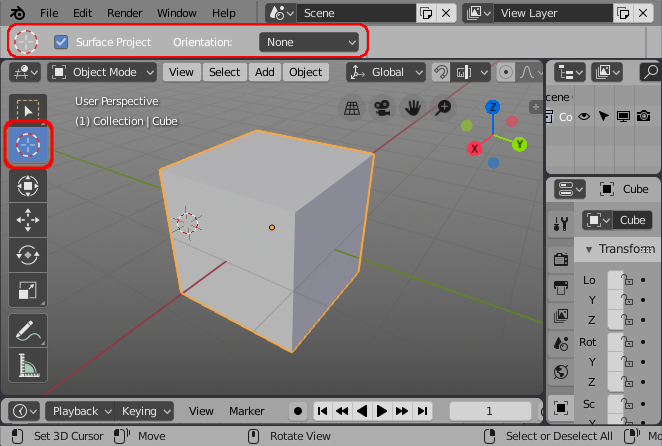 Enabling the Cursor tool gives you options to set whether the cursor is projected to the clicked surface and how the Orientation should be updated.

The default option is for 'View' - so the cursor is always oriented to the current view. In order to prevent the cursor from being reoriented at all, select 'None' - if you do this before moving the cursor from its initial default orientation then the cursor will remain aligned with the 3D world coordinates.

If your cursor is already skewed then you can reset it back to its default orientation by selecting 'Transform' orientation mode and then clicking anywhere in the scene not on a mesh - this will reset the orientation to the world. Once you have done this you can change the orientation setting to 'None' so that the 3D cursor remains in that orientation.

In order to set a custom orientation, you can orient a surface in the direction you want to set the 3D cursor, set the Orientation mode to 'Geometry' and click the surface to move the 3D cursor to that surface, settings its orientation.

In the final release of Blender 2.8 the tools options can be found in the 'Active Tool and Workspace' panel on the right side : 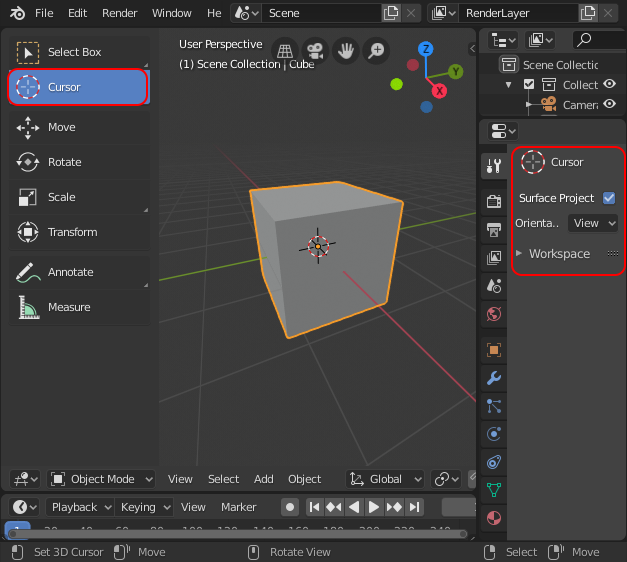 EDIT. The API now has a Scene.cursor which has the three rotation modes the same as objects in blender.

To quickly reset the cursor to global axis alignment, for example set the rotation mode from Euler 'XYZ' to QUATERNION

Not the answer you're looking for? Browse other questions tagged 3d-cursor or ask your own question.

0
Unwanted bone rotation around cursor
4
Snap cursor - wrong positioning with three vertices
6
3D Cursor Rotation?
2
Blender 2.81 - Copy cursor rotation to an object
3
Is there a quick way to orient the 3D cursor to geometry in Edit Mode?
1
How do I make the cursor reset to the middle of the object?
6
How do I rotate the 3D cursor to match the rotation of a camera?
1
Grease Pencil - Can't move 3d cursor with pen tablet, can't specify new hotkey
5
Is there a standard way to move 3d cursor with axis constraints?