need help with deforming a mesh over another mesh

say you have sphere and plane meshes and you want to take the plane and slide it to the sphere without it clipping through but you also need it to deform around the sphere. is there a way to do this?

im asking because im trying to put windows on a boeing 777 and i need the windows to take the shape of the plane's body and i dont want to go editing them to fit each area one by one. i tried the snap function but i need something that can deform it too

If I understand correctly you want the shrinkwrap modifier. It will wrap the sphere with the plane. Place the modifier on the plane and select the sphere as the target. If it does not work make sure the plane has the necessary geometry to deform. 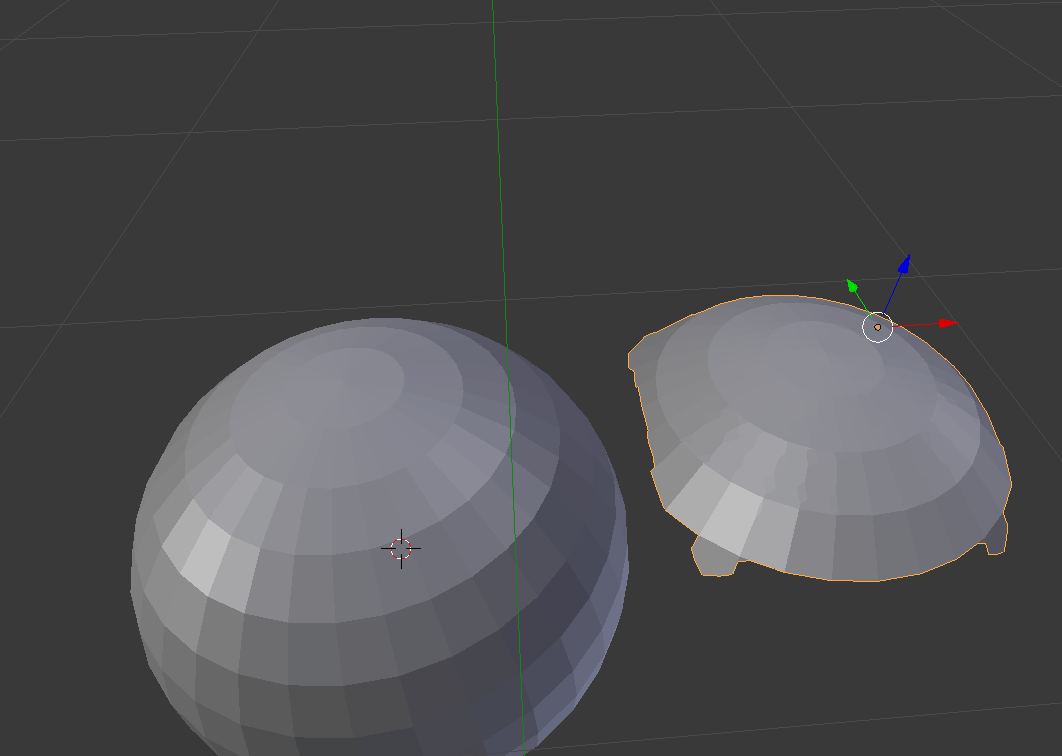 If we imagine that your window is not plane, but has some volume, like this : 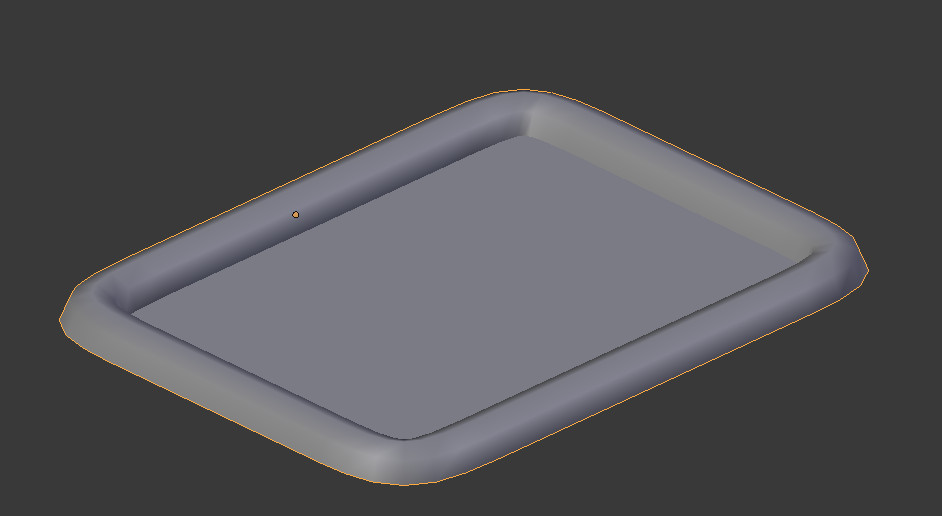 Using the shrinkwrap modifier without a bit tuning will give you this kind of result :

And you may want something like this, preserving the window volume :

To do that, we can combine two modifiers, vertex weights proximity and shrinkwrap.

The configuration is the following : 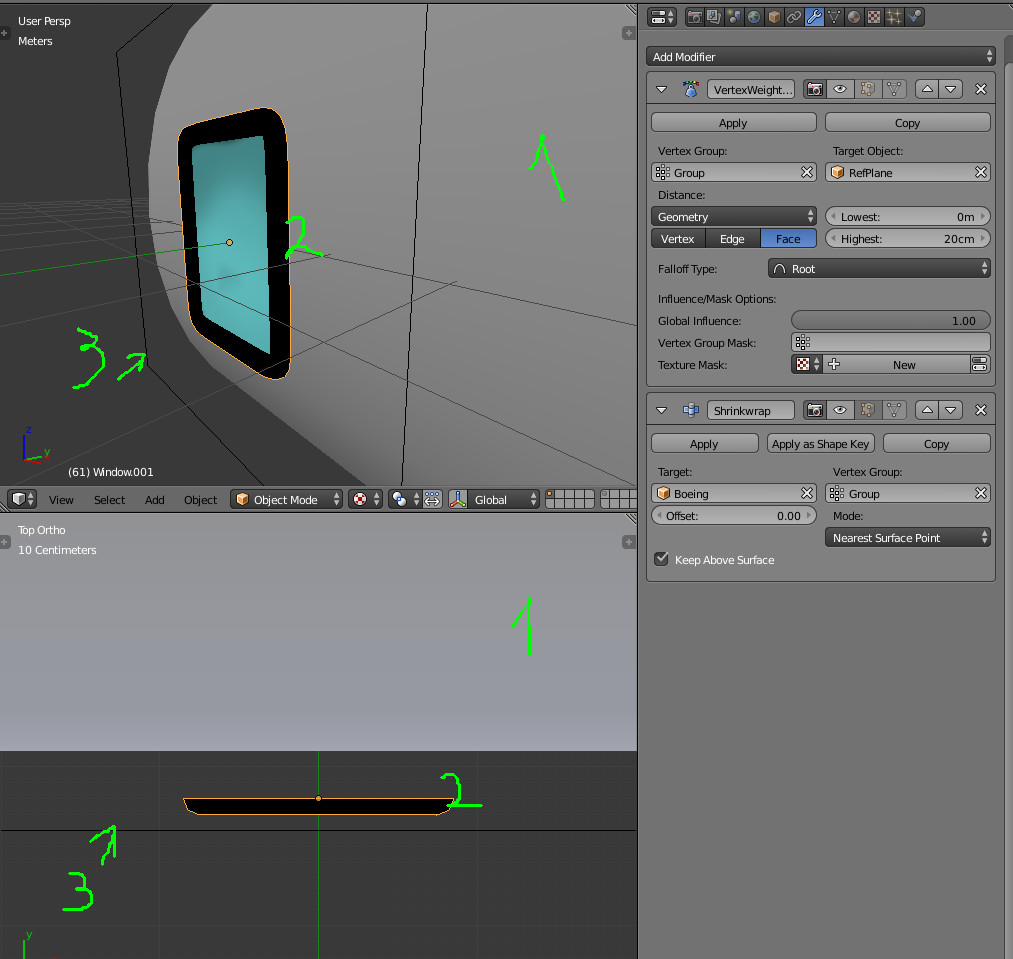 The vertex weights proximity modifier will give us a way to moderate the influence of the shrinkwrap modifier. The proximity is defined from a reference object, here a plane.

The idea is to set weights on a vertex group (depending on their distances, from the reference plane) and use these weights to influence more or less the shrinkwrap behavior.

Having defined the two modifiers, as in the above picture :

Concerning the vertex weights proximity, the idea is to tune the lowest and highest values. As my window here is 10cm in weight, I have set these values to 0 and 20cm. This because we want to define an influence (nothing set to zero) between 10 and 20cm.

Here are the weights generated by the modifier : 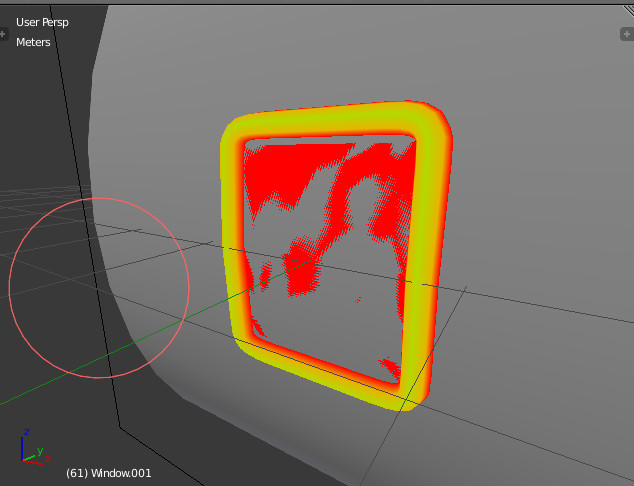 You can tune. Just move or the reference plane, or the mesh (or the lowest, highest values mentioned above) :

To complete all this, if you need a more accurate placement, you can apply the vertex weights proximity modifier and edit the weights directly in weight paint mode.

Note : the vertex group has to be created before all that. Create the group, and assign all the window's vertices to it.

9
Wrap curve around sphere
9
How do I shrinkwrap an object to a curved surface cleanly and efficiently?
4
Shrinkwrap mesh onto another mesh

2
Modelling an airplane with a irregular shape
2
Finding top surface area of a mesh by python
2
Blender Equivalent to Padding?
3
vertex slide and snap not working together
0
Soft body for a round character