How to make a granola Cereal

I'm fairly new to blender and I've finished the infamous donut tutorial so I guess I know my way around blender enough to say I'm not fresh-of-the-boat new...

I've given myself a new project/challenge... Though I'm not entirely sure which approach is the best.

My goal is to have a bowl of granola/muesli in similar layout as this image: 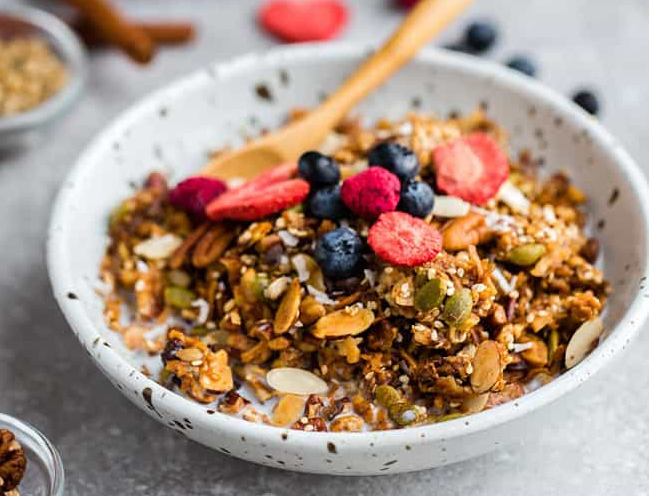 I'd like the render to be able to stand up to close inspection, not necessary at a oat-flake level, but enough to frame a box of cereal/bowl and its contents...

I've created the bowl from another tut... and I've made one oat... and then the realisation of "I still dont know what I'm doing" hit me... do I make the oats into a particle system? how do I texture them, using an image or procedural? 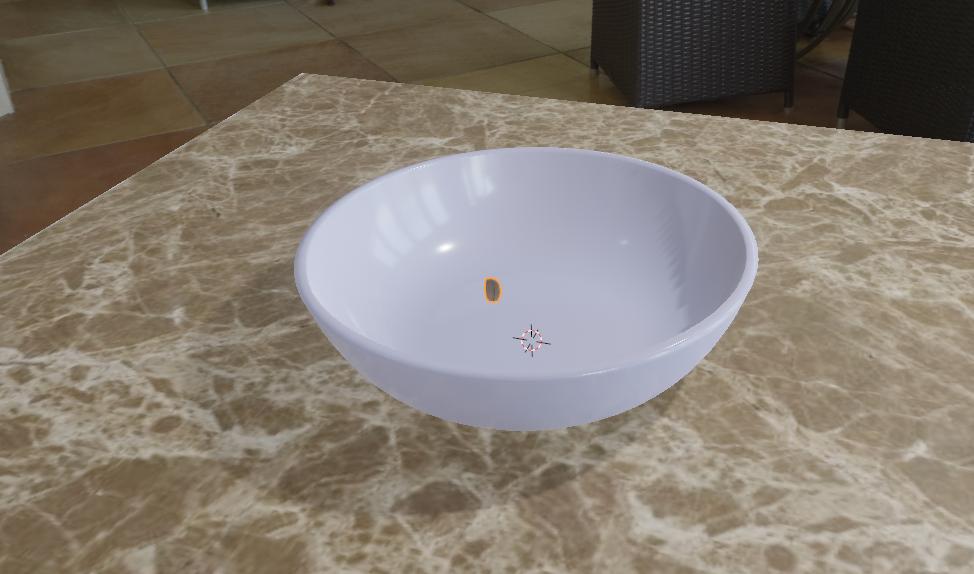 I would love some help and guidance... How would you guys tackle this one?

Any suggestion would be greatly appreciated...

Here's an example you can look at - All the textures seen are entirely procedural - no image textures were used (except for the table - I nabbed that from 3dtextures.me). And although some of the stuff looks a bit hammy upon closer inspection, most of it looks ok from a distance.

Instead of simply using a particle system to "fill" the bowl with granola particles, as you were first thinking, I would suggest instead you use a combination of a Textured Base (the granola pile & milk), littered with actual cereal bits and seeds (created separately and instanced using geometry nodes), and topped off with some fully modeled and manually placed pieces (the berries).

Starting with the bowl, make a face around where you think the milk-line should be and then separate it into it's own object with P. This will be the basis for your milk/granola stack. 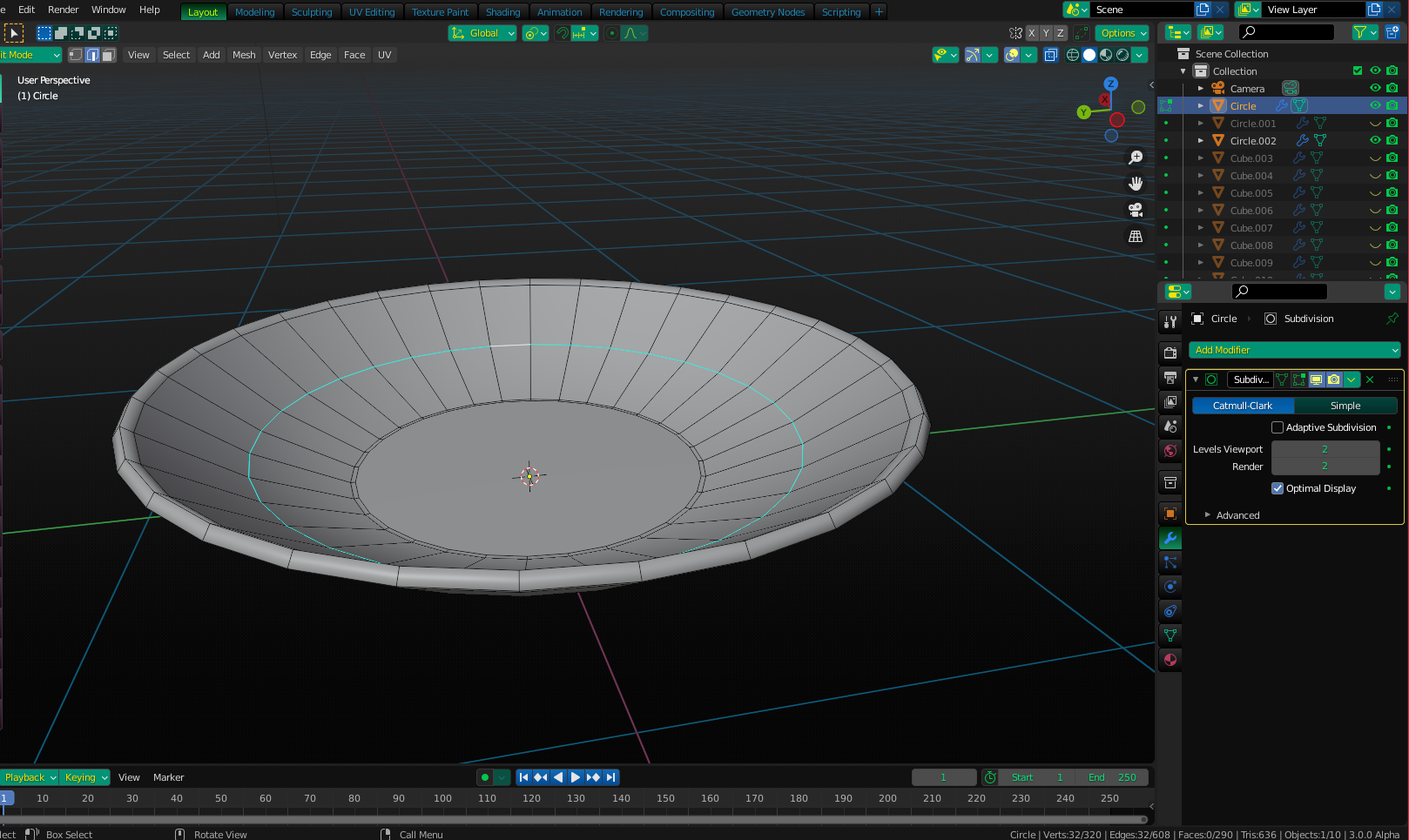 Inset the face so the inside circle is rather small, then add loop cuts to the surrounding section to give more geometry so we can make it "lumpy" in the next step: 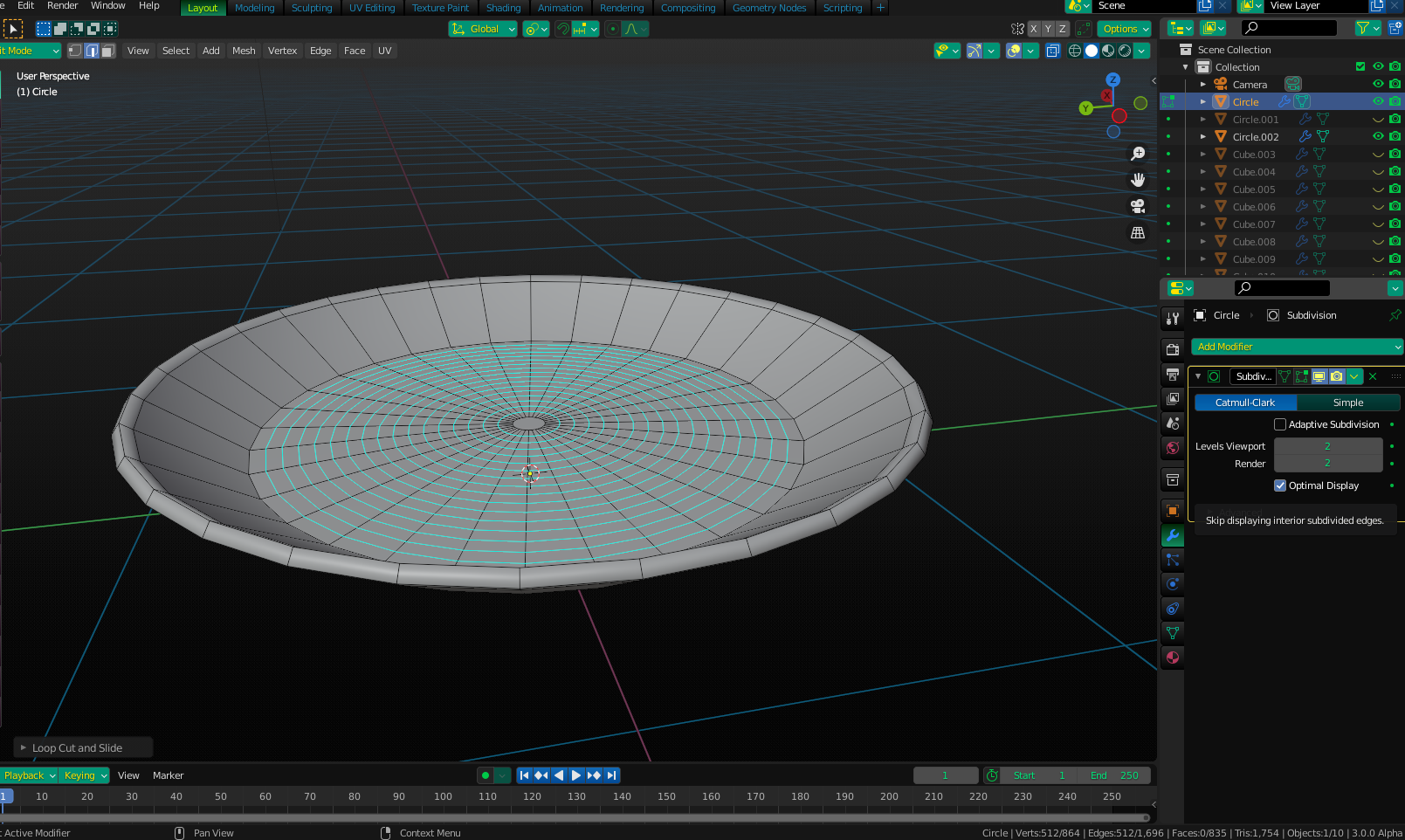 Select certain sections on the mesh, turn on Proportional Editing (O) and raise some sections near the center. Change the size of the edit with the mousewheel. Do this a couple of times - picking different points each time and making the edit wheel slightly smaller - so there's a "big mounds with smaller lumps" kind of thing. Try to do a better job than I did at keeping the milk line flat-ish (I guess I was in a hurry). 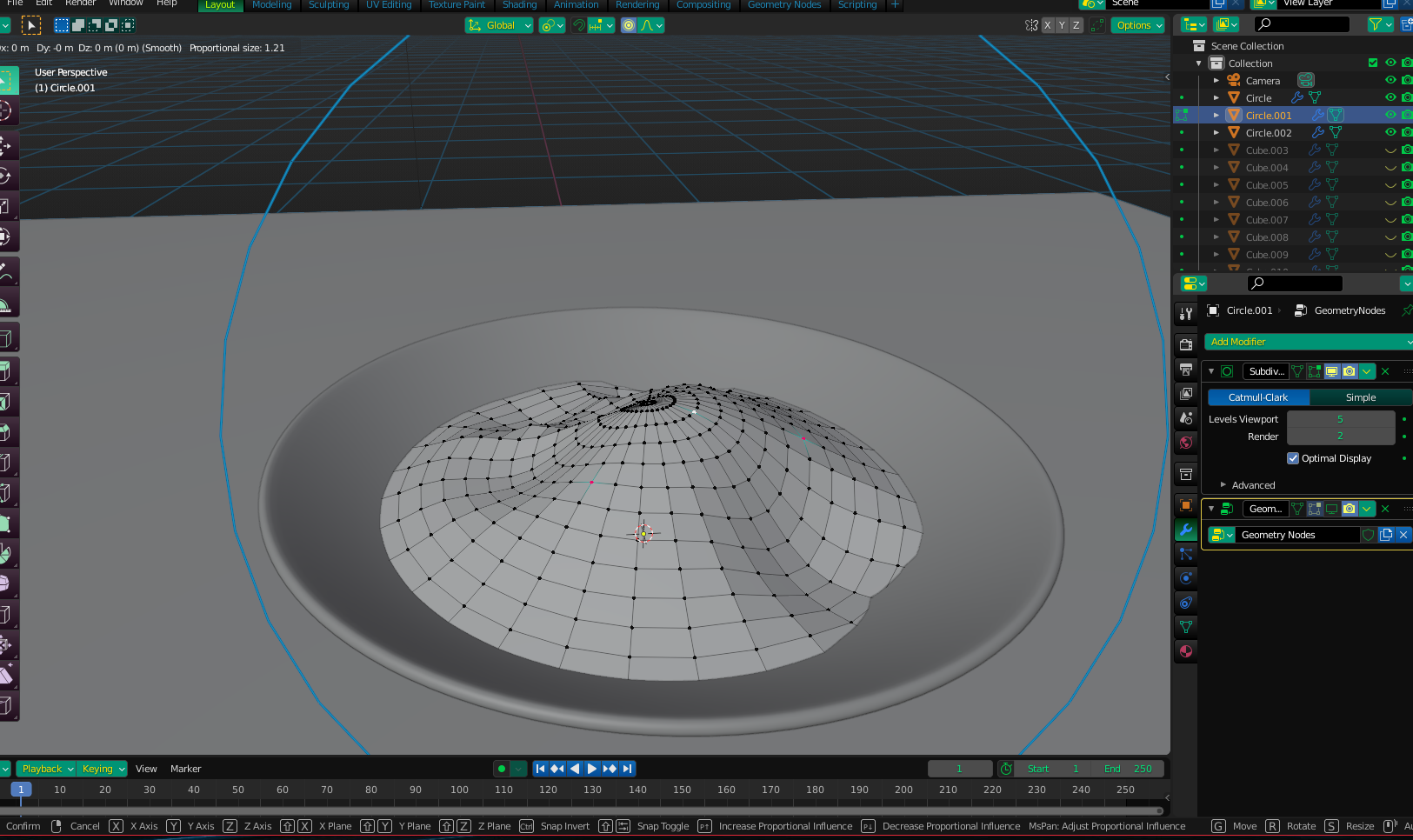 For the texture for this section, I used 2 Principled BSDF's mixed with s Mix Shader, using a Gradient Texture, separated on the Z to act as a cutoff between the Granola Texture (Made with mostly Noise Textures) and the Milk Texture (basically shiny white with some subsurface scattering). I added a Displacement, which looks good at full strength in Cycles, but it causes it to clip through some of my geometry particles and I haven't been able to figure that out yet, so I left it at low strength. 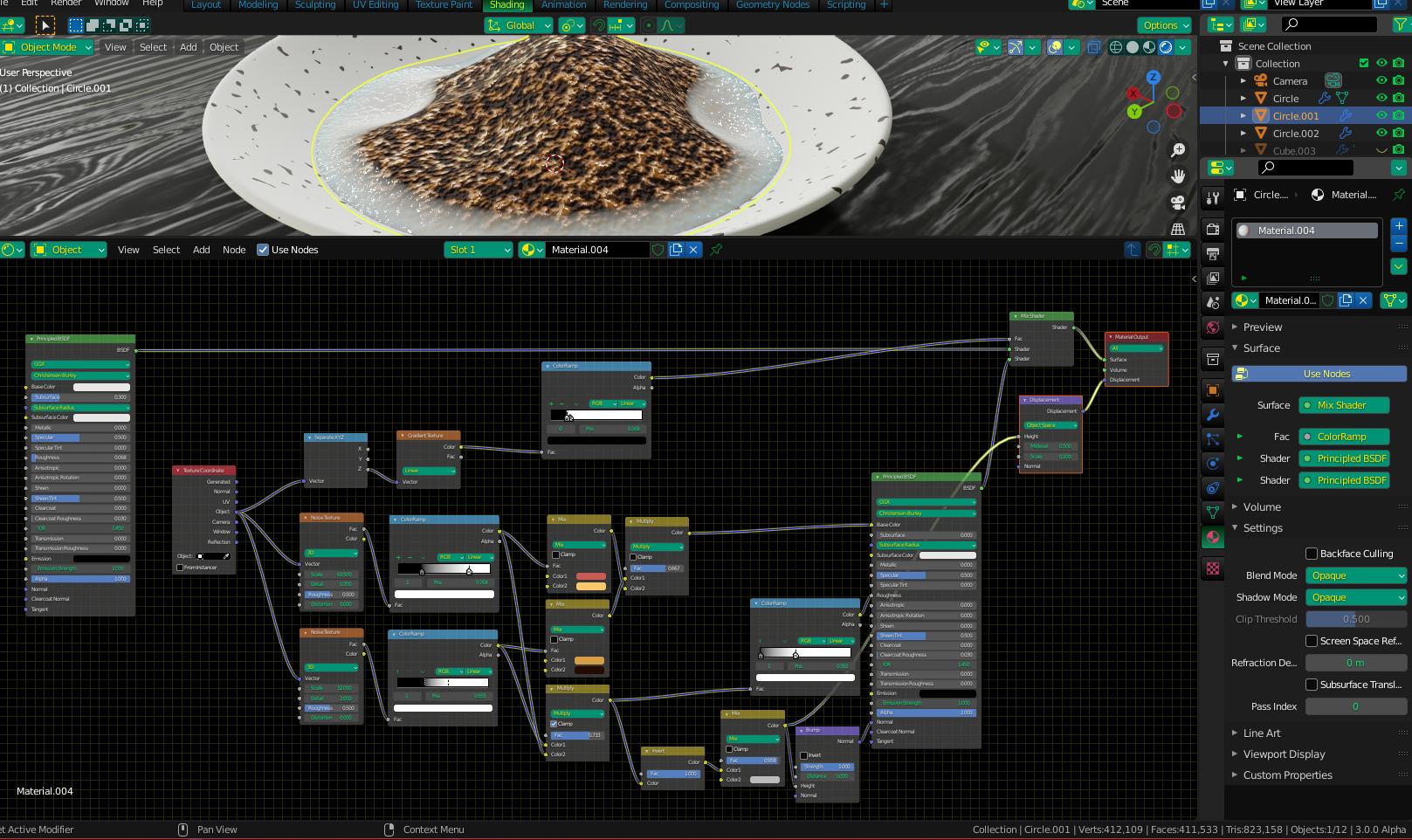 Next I made some "seed and nut pieces". I made some shapes with simple geometry that will be "strewn about" the dish with Geometry Nodes later on. 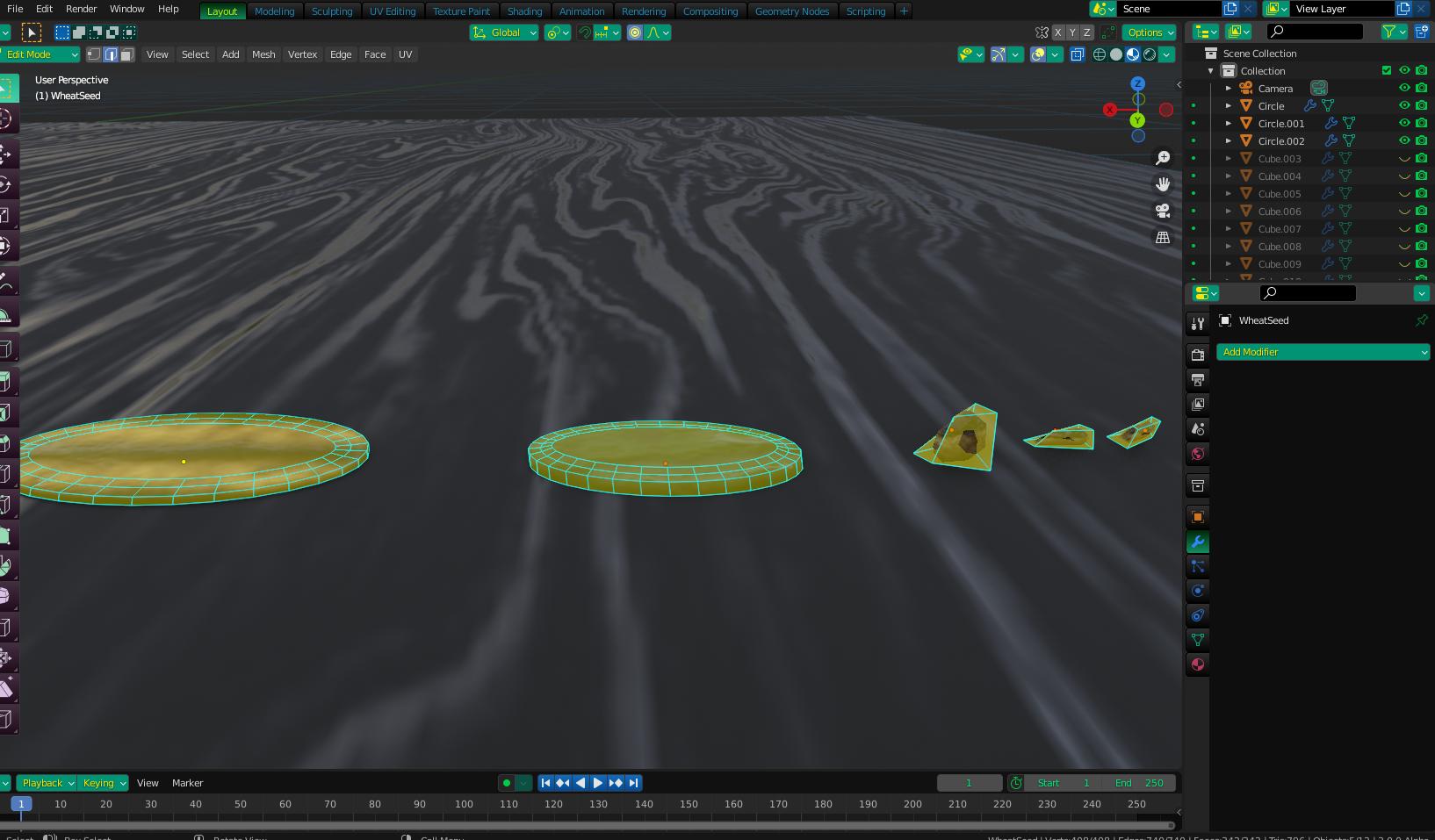 I then gave them procedural textures to try and approximate what they're supposed to be (Pumpkin Seed, Wheat seed, Nut chunks). 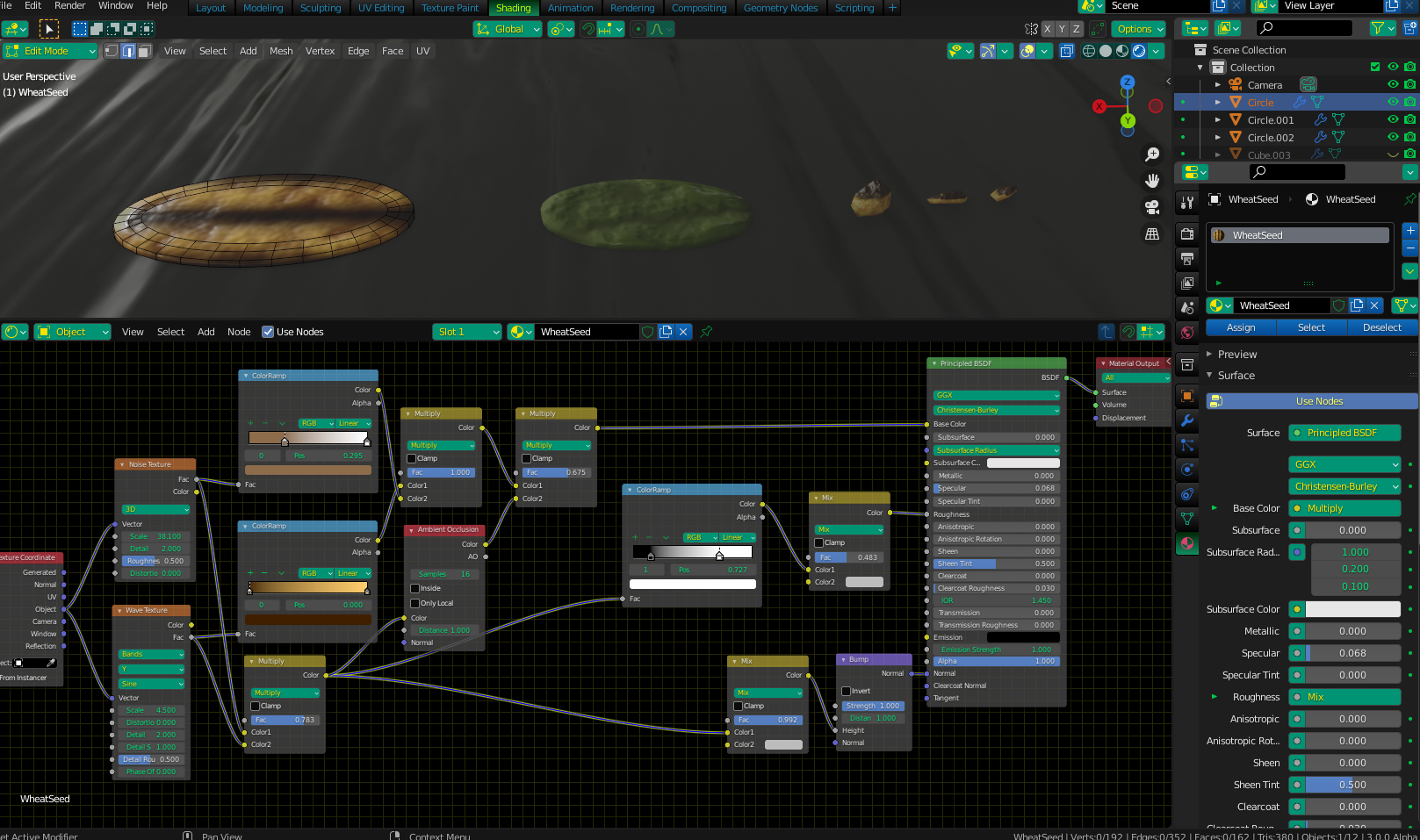 To distribute them along the surface of the "granola mound", I used Geometry Nodes (A much better alternative to the particle system if you ask me). I used the nodes to distribute the seeds and nuts all over the surface, giving slight alterations to their respective scales and rotations. There is a way to use weight painting to "isolate" where the stuff gets spread around, but I think it looks fine "all over" here, with bits floating in the milk and stuck to the sides of the bowl a bit. Notice that I put the "nut chunks" into their own collection and then instanced the collection. You could do this for all the seeds if you want, but breaking it down like this gives better control over the distribution of the different kinds of seeds. 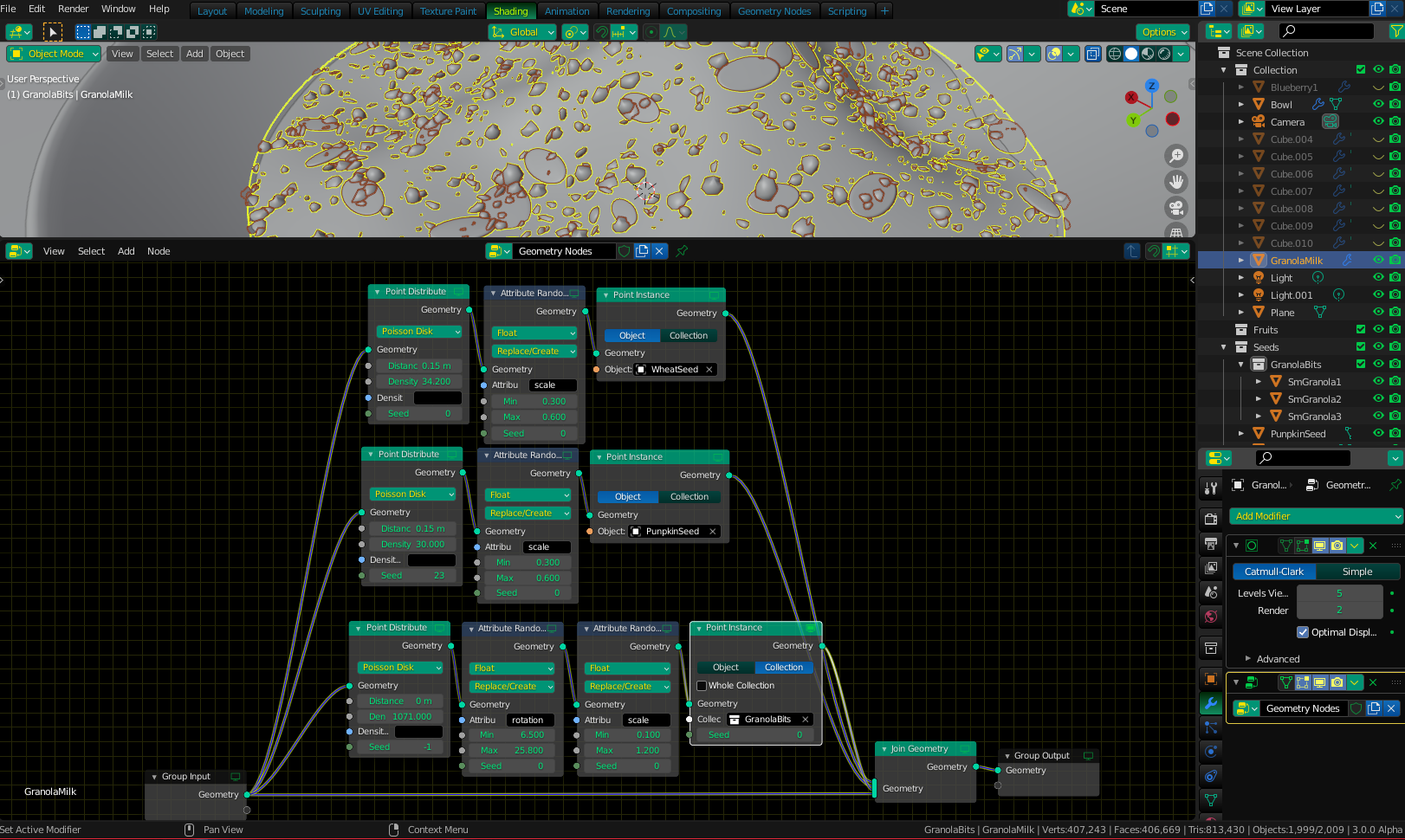 Next, I modeled some larger fruit pieces that I would manually place over the dish. 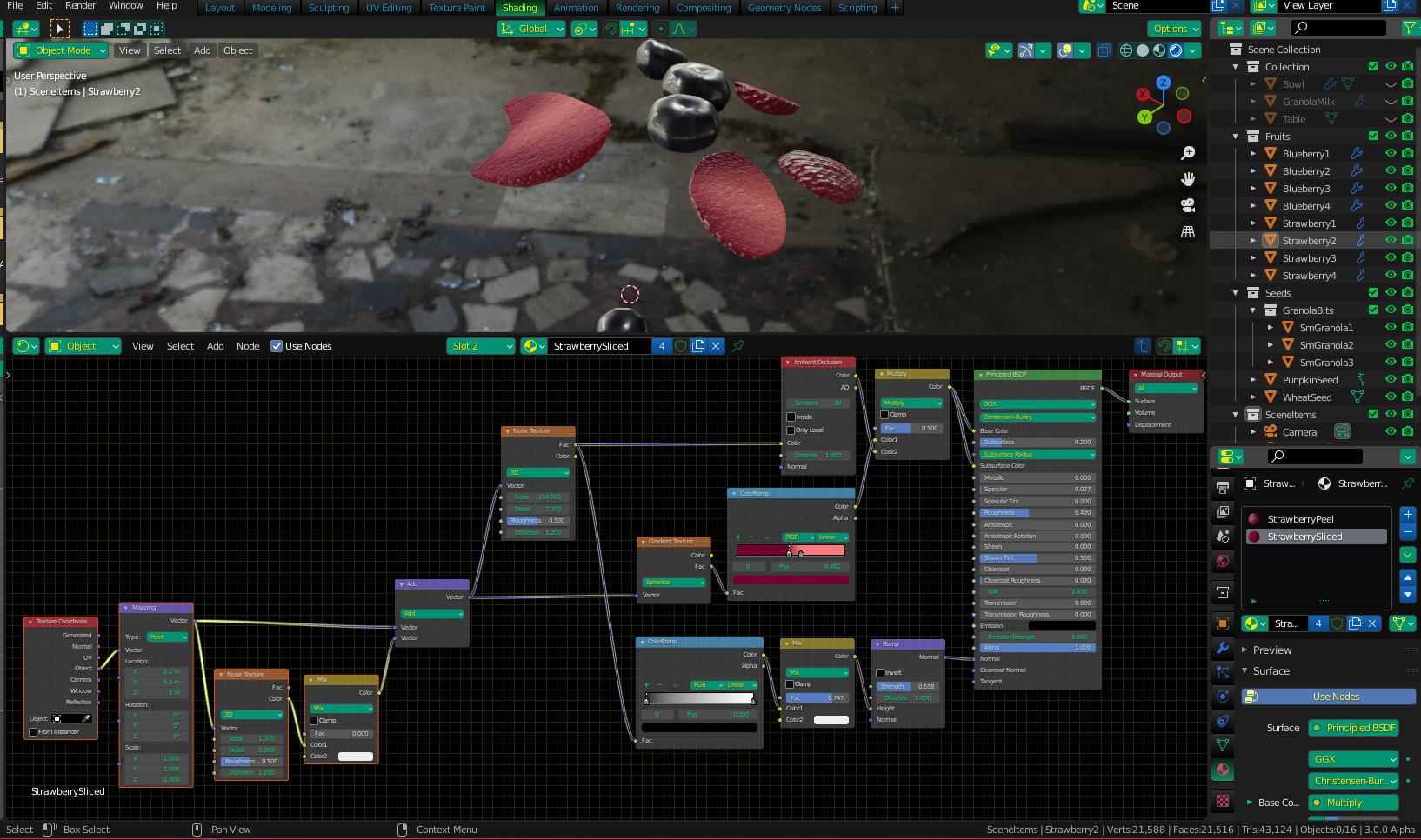 Here is the end result put together (works in both Cycles and EEVEE, with very minor differences). 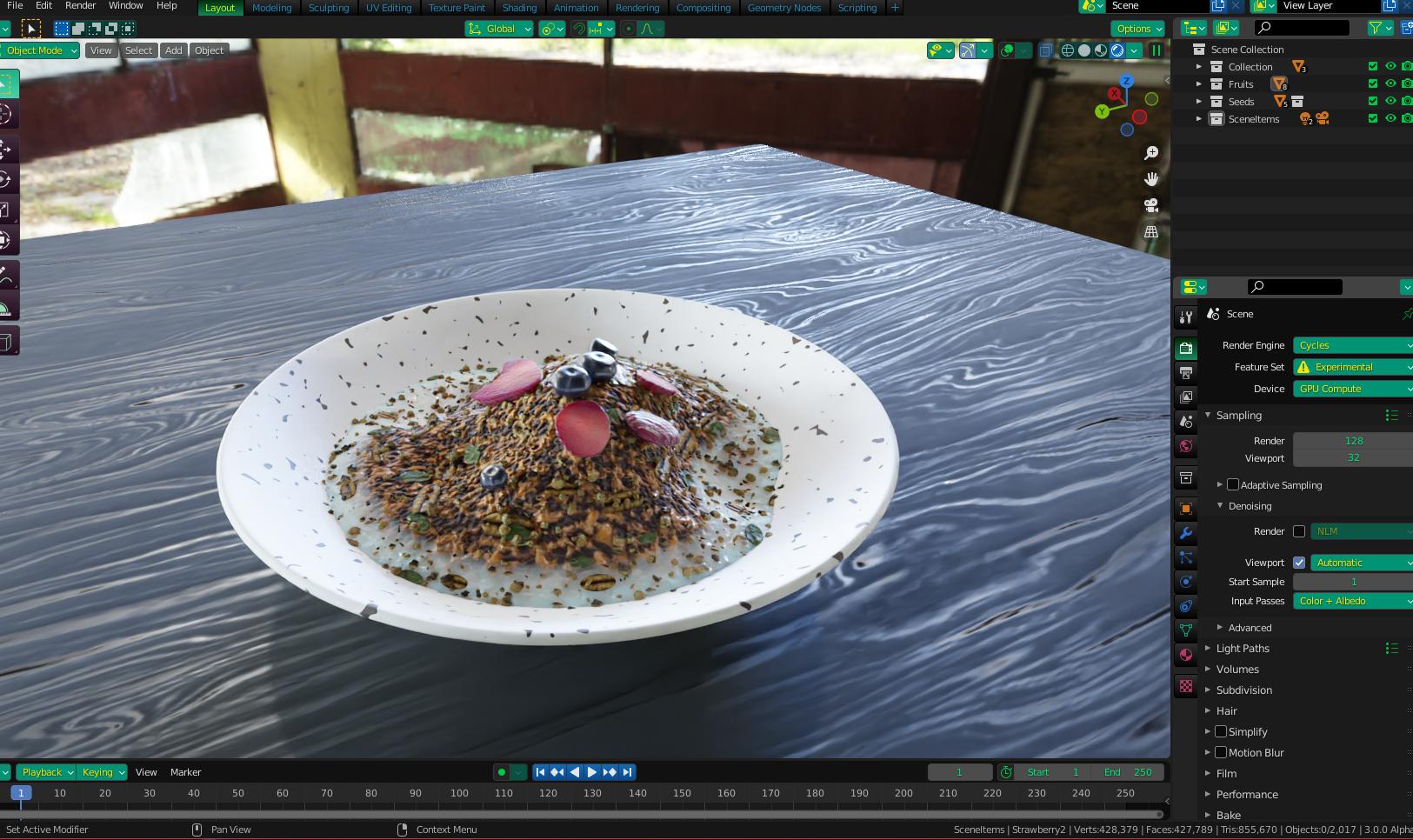 Because it's such a large project, I didn't go in to too much detail about a lot of it. Instead, I'll post a copy of the .blend file here so you can get a better look at how it's all put together.

EDIT - I had a bit more time, so I played around with the file a bit more. I fixed the "milk" level, used proper weight paint assignment for the Geometry Nodes (yes, the stuff that's still in the milk is there on purpose), and I added some more "muesli" bits such as almond pieces and coconut shavings. Although this looks like a final project, it is far from it - I didn't just "do it all" for you, this is meant to be a learning experience for all that wish to see, and indeed I found I learned a few things along the way as well. I certainly did not do the Geometry Nodes justice, as they can be arranged in such a way as they can switch between "pre-setups" on the fly. To get a better ideal of what I mean, take a look at this link where they employ the process when making a salad - https://www.youtube.com/watch?v=Sj951PB6tXs&t=113s

Here's a pic of the updated file (in Cycles), and a copy of the updated project. Oh, I even threw in a Material I made to replicate the counter - it's yours for free if you want it. 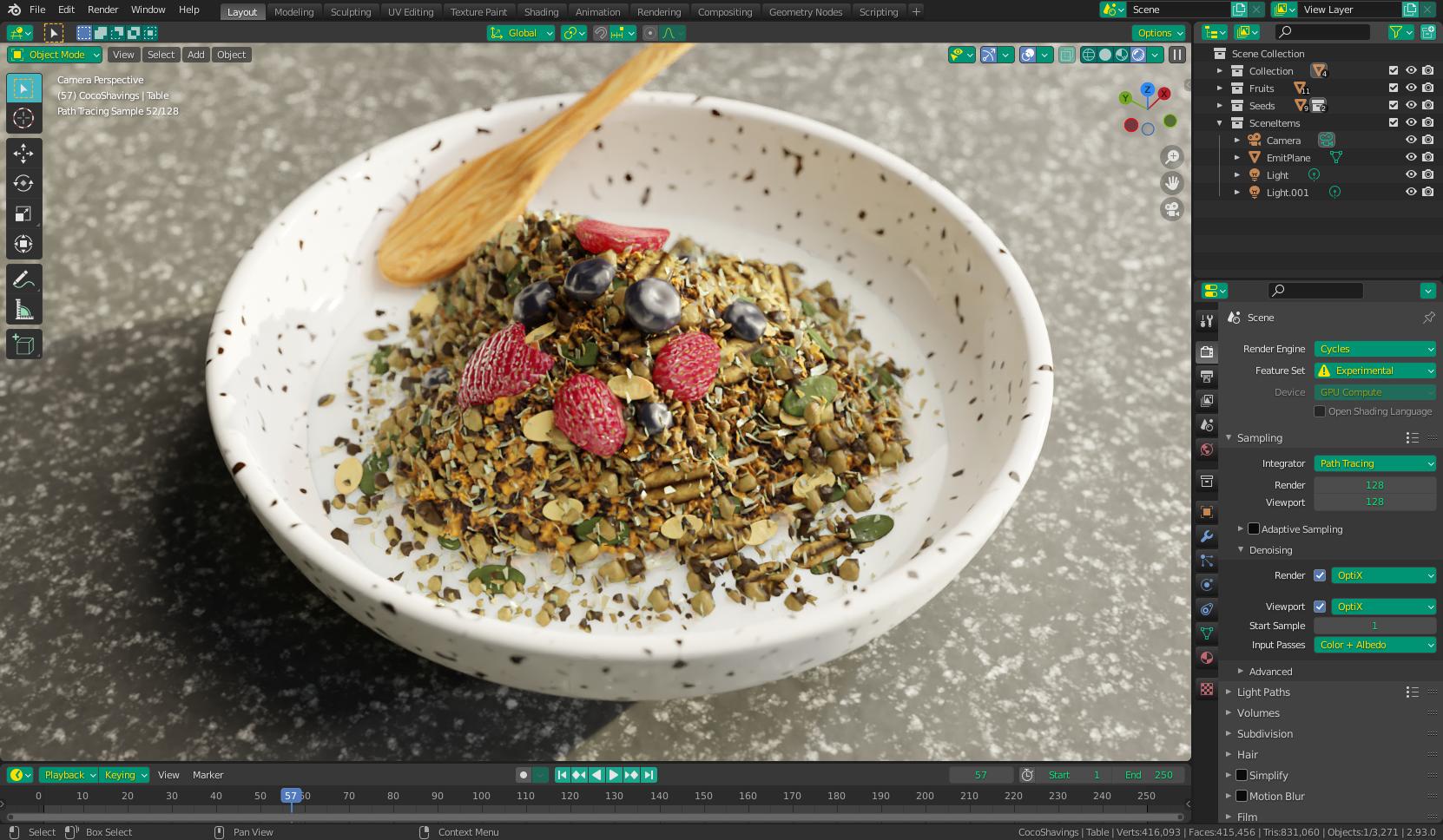 Not the answer you're looking for? Browse other questions tagged modeling mesh texturing materials or ask your own question.

6
Equirectangular world-map UV layout - the sequel
4
How to make a jelly material?
1
How to make twisted strips
0
How can i make cloth details like this?
3
Realistic Cereal
0
How to make a smooth surface for OBJ files?