What's the difference between the Undistortion node and the "Render undistorted"option in the camera background settings?

When you do camera tracking in Blender and press the "Setup Tracking Scene button", Blender automatically sets up a compositing node configuration that makes is easy to add 3D elements to the video footage. One of the nodes is an Undistortion node, that is supposed to undo the lens distortion, to make the undistorted 3D elements generated by Blender fit into the footage.

When you are working on your scene, you can set the video to be the background image for your camera. In the settings for the background image, by default the "Render undistorted" checkbox is checked. My expectation was that this would have the same behaviour as the Undistortion node in the compositor, but this appears to not be the case.

My question is: how is it possible that the Undistortion node has a different behaviour from the "Render undistorted" option for the camera background? Do they, for some reason use different distortion values (K1, K2) to do their calculations? 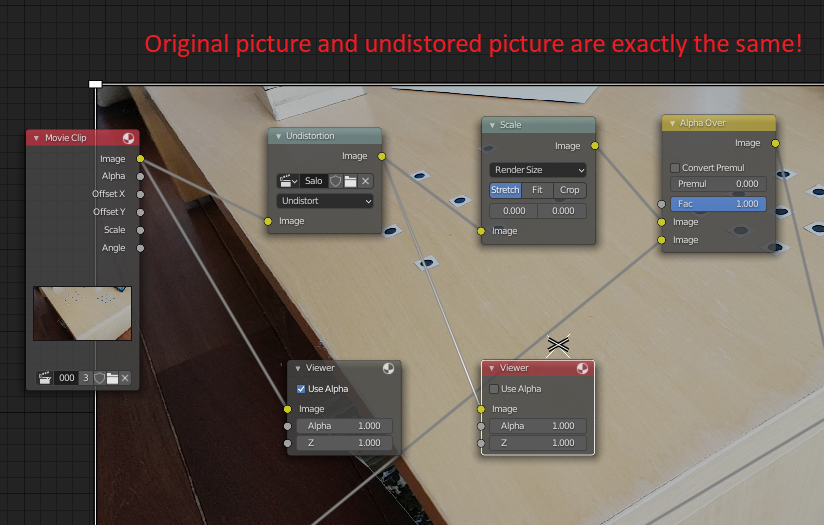 The camera background image in the viewport, with Render Undistorted option enabled,

should look the same as the result of the "undistort node" in the compositor,

and same as when you check the "render undistorted" in the Clip Display options in the Movie Clip editor.

In the undistorted image, straight lines should look straight, not curved. If they don't, then the Radial distortion coefficients k1, k2 (and k3) are not set correctly, or the optical center of the image might be incorrect as well.

To determine the distortion coefficients photograph a chart (or anything that has straight lines), open the image in the movie clip editor and use the annotation tool to trace thosestraight lines and distort them to match the image as shown in the following link:

How to determine lens undistortion values for motion tracking?

Today I found the answer to my own question. I discovered that in the Undistortion node, you need to specify the movie clip that should be used to calculate the undistorted picture. It turned out that I was using an earlier version of my video there, instead of the version that was used for motion tracking. Specifying the right video gives the expected result.

29
How to determine lens undistortion values for motion tracking?

3
Movie Distortion Node in compositor does not respect optical shift values from Movie-Clip-Editor?
2
Motion tracking. The edges of undistorted footage are cropped, and so are the elements of the 3D scene
1
Help with determining camera specs? Blender Motion Tracking
0
Adjust Background Transparency after Motion Tracking
1
How to do camera tracking for a video shot in portrait mode?