How to set object at a specific depth from the camera, at a certain pixel

I want to set an object at a certain distance (or depth) relative to the camera; and also at a particular pixel.

I set up a camera at a random position in blender. I want an 1280x720 image. So if a line came out of the camera at pixel e.g. (400,400), perpendicular to the image plane; and that line travels 1300 millimeters. It will end up at position (x,y,z) in the blender world. That is the point where I want the bottom centre of my object to be at. How do I calculate this location (x,y,z) ? 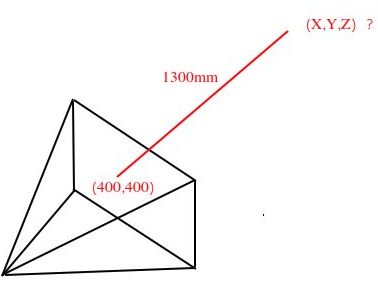 Some more context here. I have a image of a scene with a table. I also have the corresponding depth image, which stores for each pixel, the distance in millimeter from the scene to the camera. I have the segmentation mask of this table. So I know for each point on the table, its distance to the camera. I want to set an object on this table, by rendering the scene as background, and rendering the object on top of it at the correct location from the camera.

I think, next must be works:

Sets empty objects to every corner of image - pinLT, pinRT, pin_BL, pinBR. Then calculate rays from camera base to those pins:

then make interpolation to find correspond ray to the pixel

Your world coordinate is then (x, y, z) relative to the camera. So with my camera setup, I can set the object at location (x, z, -y) (divided by 1000, because I used millimeter as measurement for the depth).

Not the answer you're looking for? Browse other questions tagged objects camera coordinates world depth-map or ask your own question.

26
3x4 camera matrix from blender camera
9
What is blender's camera projection matrix model?
3
how to interpret the camera world matrix?