I want to know if there is a method for figuring out how much light is incident on a mesh using python. Some function for it that I can use or any leads on how can I implement this function will help a lot.

(the setting is such that there is a room that has mesh walls and floor and some lights. I want to quantify just how much of the floor is lit)

You can simply rewrite a raytracer (e.g. here) which checks for rays from the surface to the point lamps. I will demonstrate the steps in a simplified way.

Get a triangulated bmesh object from the active object. The bmesh is a python module with which we can access vertices, edges and faces.

We also need to generate sample points for the faces. For that we use the triangulated faces. Luckily, bmfaces already have a builtin area calculation, if we wanted to get the relative amount of light (I will only get the absolute amount though). For the random points on the triangle we can use the method of 4.2 in this paper, mentioned in this question.

Next, we select a triangle with probability proportional to its area by generating a random number between 0 and the total cumulative area and performing a binary search on the array of cumulative areas. For each selected triangle with vertices (A, B, C), we construct a point on its surface by generating two random numbers, r1 and r2, between 0 and 1, and evaluating the following equation:
P = (1 − √r1) A + √r1(1 − r2) B + √r1r2 C Intuitively, √r1 sets the percentage from vertex A to the opposing edge, while r2 represents the percentage along that edge (see Figure 4). Taking the square-root of r1 gives a uniform random point with respect to surface area.

The equation translated into python

To get the light intensity of a single sample point we need to cast a ray from the point of the sample in direction of the lamp. If the ray doesn't hit anything between the sample point and the lamp, then we can use the lamps intensity. I've implemented a simple linear falloff of a point light. This has to be adjusted for different falloff types. The following function returns the intensity at a sample point.

Now we can use this function. First, we get the lamps and a bmesh object from the active object. If there was a mesh selected, we have to call faces.ensure_lookup_table() on it to access the faces. Then, we loop through the faces and for each face

Finally, I print the result. 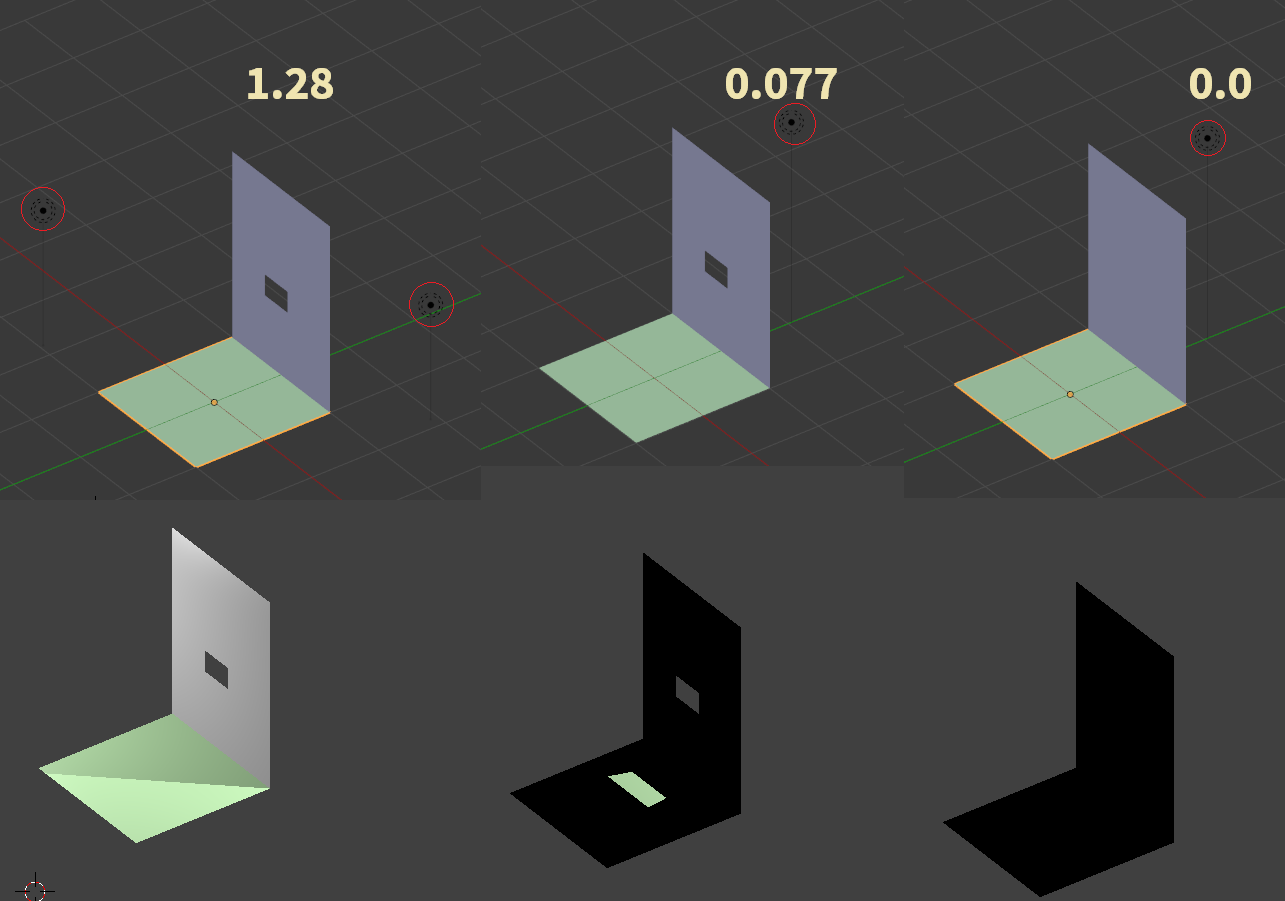 The todo things would be to support the different falloffs of point lights and/or add other types of lights (like sunlight). The single float output is also not the best visualization.

Not the answer you're looking for? Browse other questions tagged python cycles-render-engine or ask your own question.

6
Why does the shadow pass not account for mesh lights?
1
Accessing illumination of face/polygon in python API
5
Need to understand how to show reflected light well with cycles
2
Creating realistic concert lighting
1
Material emitting one way for interior scene?
1
How can i make something Invisible if the Light is on?
0
Full sphere (or double hemi sphere) lighting
2
Why is my Cycles scene so bright even with no lights?