Essentially, I am hoping to create a single "RCS Plume" object (in my test case, a simple cone), which is then instanced via the object instancer node to occur once per face, with its local z axis facing along the normal of each face. After that, I run the object list of each "plume" through a loop that is supposed to scale each plume depending on the acceleration (currently only rotational, to make things simpler in my test cases), using ClockMender's My-AN-Nodes Object Speed & Acceleration node.

However, I've only been able to get all the plumes to scale the same amounts simultaneously, or to not scale at all. Is this something that's possible with Animation Nodes and Blender?

My attempts so far are:

The uppermost nodes, creating the instances of the cones.

The nodes being used to calculate the scale when provided the value of one axis on the current, previous, and previous previous frames.

The loop itself, and where I suspect the issue lies.

Specifically, I'm unsure as to why all three object transform inputs are providing the exact same value from their rotation output, given that each should be giving a different frame. (The "Use Current Transforms" option on the two using offsets is unchecked). If instead of giving the loop a object list of each plume, I instead give it the single object that the plumes are being created on, the rotation values are different, as expected. However, this results in the same scaling occurring to each plume regardless of position, as mentioned above.

Finally, a view of my test setup: 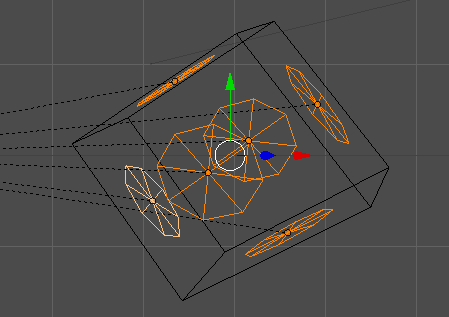 The cube is the object that the cones are being created on, and the selected objects are the cones, currently stuck at a local z scale of 0.

My desired result would consist of each cone only scaling when it is tangent (this may be the incorrect term, apologies) to some component of the rotation, and not on the half of the object that is in the direction of motion. Additionally, the scaling would be in proportion to the acceleration, up to cap. Effectively, I would like it to appear as if the cones "firing" are the cause of the rotation, and eventually translation.

Edit 2018-03-11 13:59 EDT: To better explain the effect I'm looking for I've created a small animation manually doing what I'm hoping to do automatically. In the dynamic version I would want a cone to scale to "slow down" the cube on the appropriate/opposite side, rather than it stopping itself.

I've come up with a partial solution, which doesn't fulfill all of my initial requirements, but does come fairly close, and most importantly, looks decent. For reference to anyone looking to implement a RCS animation in blender with animation nodes in the future, who are looking for a (potentially useful) starting point, I've uploaded the file to Blend-Exchange:

(Look at NodeTree.001, I forgot to rename it before uploading)

This solution seems computationally heavy, in addition to not being completely physically accurate. It requires each object being instanced to become an RCS plume to have fcurves for translation and rotation. This is accomplished via Animation Nodes' Set Keyframes node, inside a loop.

The RCS effect only fires appropriately for rotation, but if translating and rotating, it will take the translation into account. This can be removed by removing the translational acceleration frame in the nodegroup.

The key to getting only one side to fire, instead of the opposite firing at the same time, was to multiply the scales for each plume by the normals of each face of the base mesh. I've absolutely no idea why this seems to mostly work.

Again, this is not physically accurate, and doesn't take relative position on the base object into account, but hopefully may be useful to someone in the future.

I believe that I've solved the issue. The solution isn't 100% physically correct, but it appears reasonably close with a few caveats:

To start with, you'll want to create 4 objects, an object to be the RCS "plume" (I'd recommend a cone), an empty to calculate individual acceleration on, a "cage" to place the RCS on, and finally, another "cage" to mark which parts of the mesh are the "bottom" half.

Once you've positioned the second cage appropriately, parent it to the RCS cage (or whatever you've parented the RCS cage to). Next, animate the RCS cage in whatever pattern you want. Keep in mind that if you change the animation at all at a later time you'll need to re-keyframe the empties!

At this point, you're ready to create the NodeTree.

Start with the generic support nodes, including the script node to calculate acceleration. The python script is as follows:

Next, create the loop that'll calculate X, Y, and Z rotational acceleration based on the empties' keyframes. 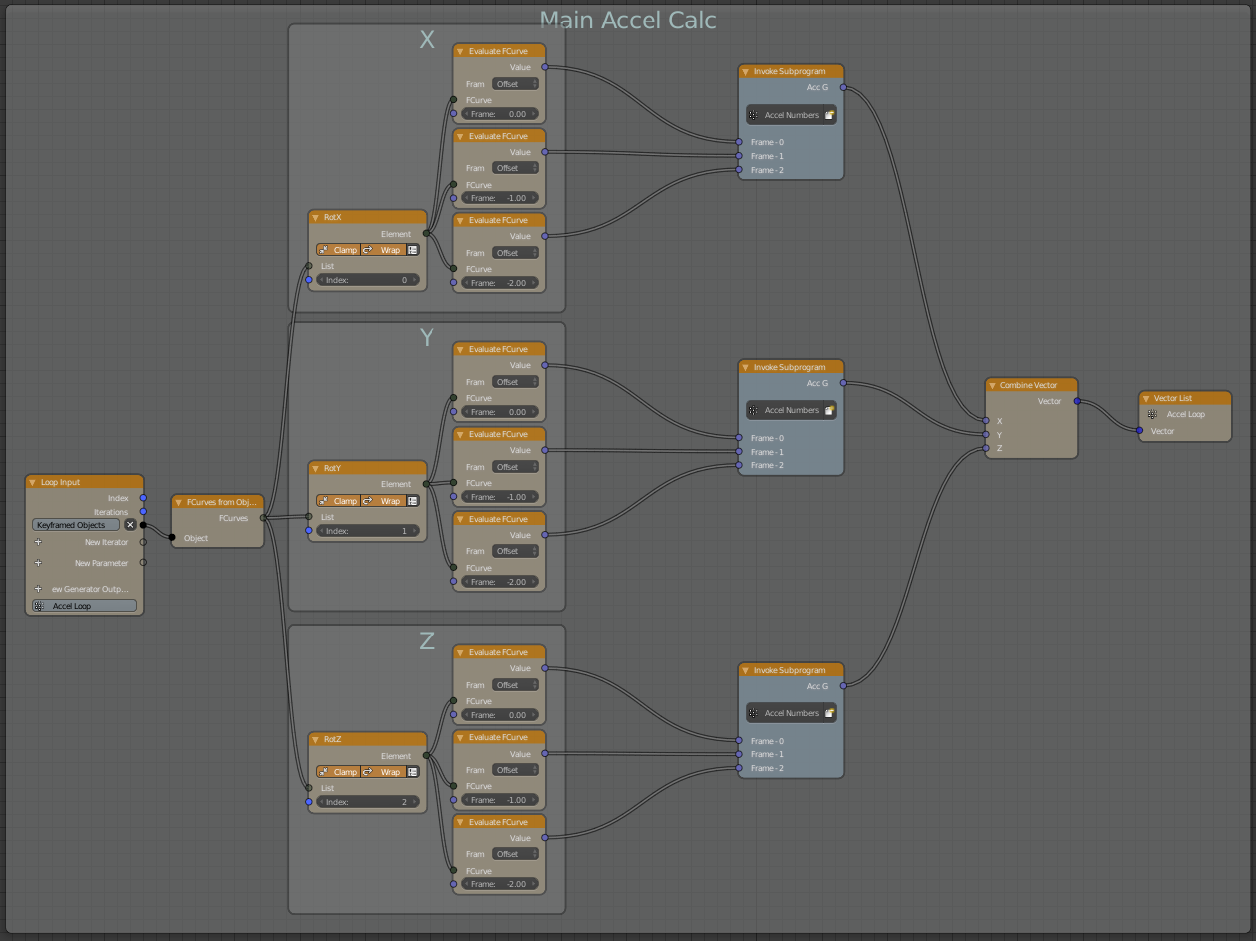 Make sure that the the frame offsets are set on the Evaluate FCurve nodes!

Initialize all the objects and empties. 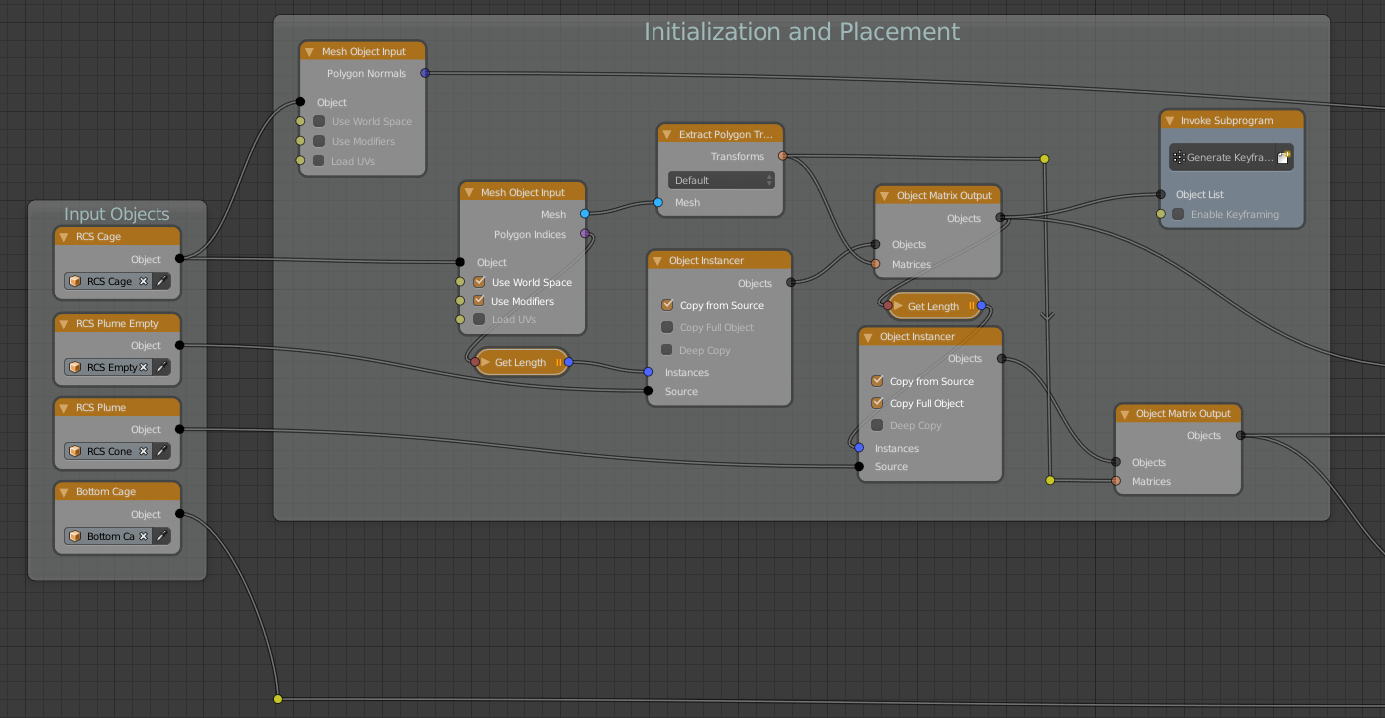 Note that the "Copy Full Object" option for the object instancer for the RCS Cone is likely only necessary if you've fiddled with the object's settings, such as their Cycles Settings.

Next, we grab the BVH tree of the Bottom Cage and check what RCS Cone objects are inside of it.

We feed this into the List Boolean subprogram we created earlier, as the Boolean Switch node is not vectorized that I can tell. This list of either -1 or 1 gets fed into a Combine Vector node, though I suspect a Vector from Value node would work as well, which is then sent into a scale Compose Matrix, which then feeds into the overall scale calculation.

I don't fully understand why the Vector Math Cross operation (of the polygon normals of the RCS Cage, and the acceleration vectors) works in keeping the scaling on "one side" of the mesh, but it does. Next that list of vectors is fed into another support subprogram that uses the Transform Vector node on each pair of vectors and matrices. Next, we separate the vector, add its components, and multiply them by 100 (to get less fractional numbers). The Map Range node determines how far each plume can scale, based on the input (set the input min to 0, and input max to whatever seems a reasonable value based on a viewer node), and the output (set the output min to 0, and the output max to however long you want the maximum length of the plumes to be). Finally, combine that value into a vector and feed it into a Object Transforms Output node with only the Z axis selected, also being fed the list of RCS Cone/Plume objects.

This next part is more cosmetic and QoL than necessity, but it will keep plume objects with a Z scale of 0 from being visible (which can cause z-fighting). 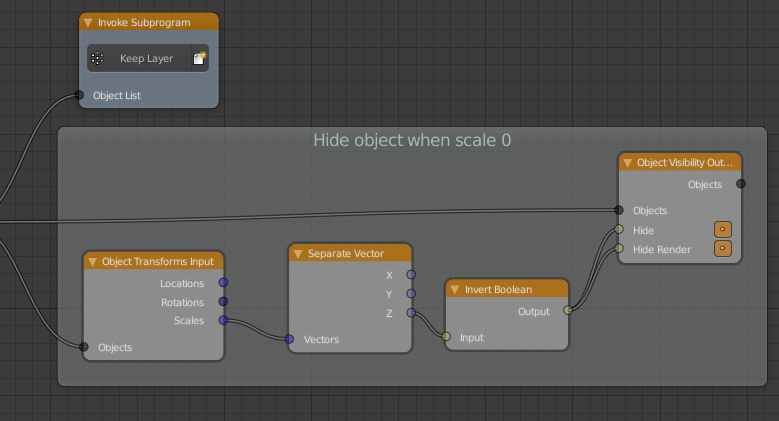 Additionally, the Keep Layer subprogram will make sure that your plumes stay on whatever layer you've selected in the subprogram's body.

For people who'd prefer to have an existent blend file to work with, here's a link:

If you've made it this far, congratulations! Here's a 4 second video of the nodetree in action. (The spaceship is not included in the above blend file)