I was given some data from a simulation and am trying to animate said data. I've gone through several other posts where they accomplished this using Animation Nodes, which works for a fixed amount of objects. The problem I'm having is one data file can contain the position/rotation for an undefined amount of objects. What I need is some sort of first step that instantiates the necessary amount of objects and then a second part that animates the objects.

The solution I'm looking for needs to:

If there is some better method to accomplish this other then Animation Nodes I am open to suggestions.

What I've tried so far

So far I've been able to animate a fixed number of objects using a loop input. I've played around with using a different character to separate the objects like '$' character. But I still get stuck trying to instantiate the objects dynamically.

Ok so I screwed around a little more and have it now so the objects get instantiated based on the length of a list taken from the first line where the elements are separated with '$' character.

I feel like I'm soo close now but I'm still running into the issue where it doesn't want to add keyframes for the 2nd line.

I've added a screenshot and the .blend so maybe someone else can see what's going wrong here? 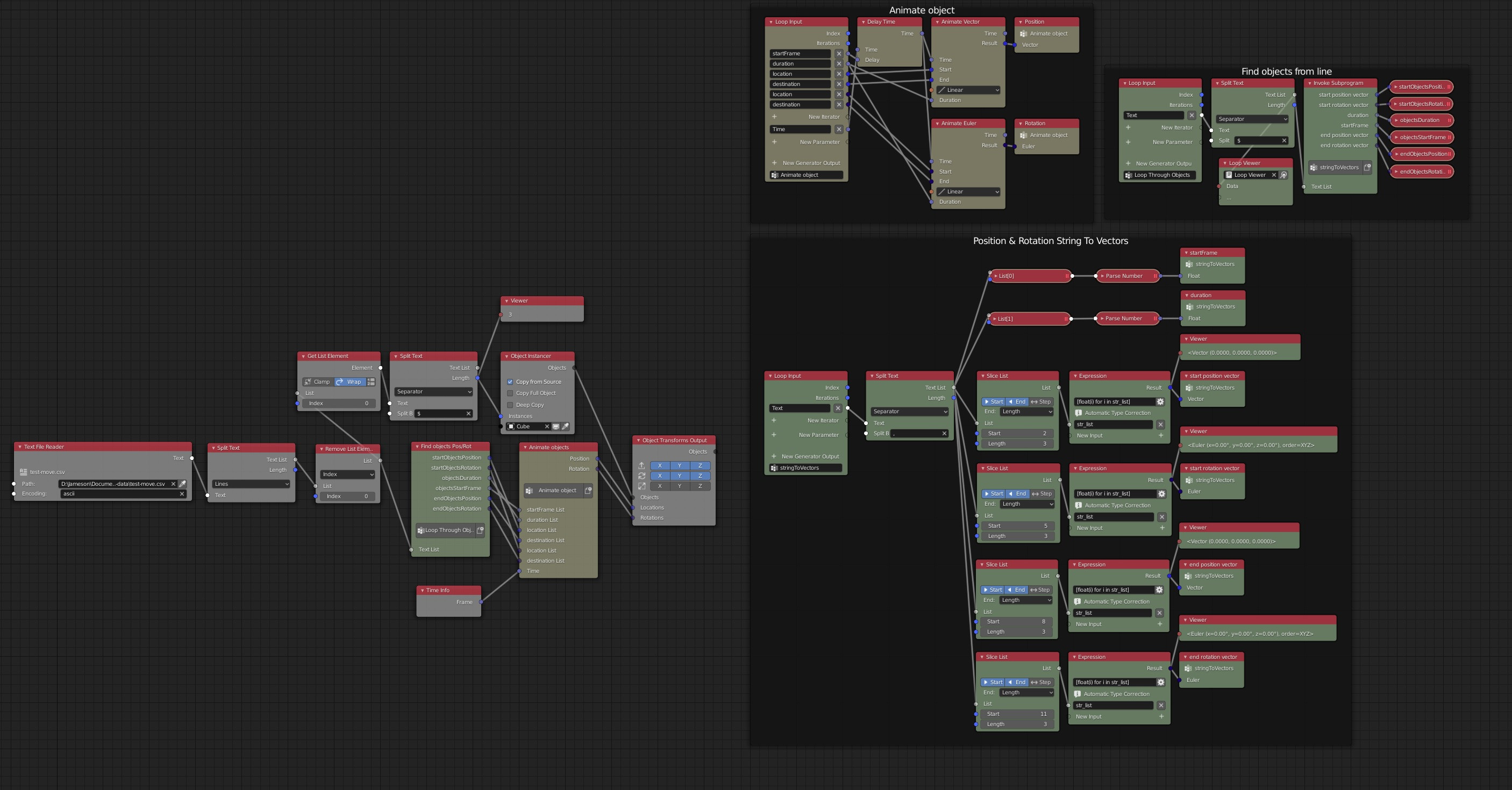 I understand attachments are typically frowned upon in SE questions but so we can all be on the same page I've attached an example CSV file.

Some more things to note are:

I finally gave up on Animation Nodes and just wrote a simple Python script instead. I changed the format of the CSV so 1 line = 1 keyframe. This is simpler but it could probably be more efficient by not forcing you to place keyframes constantly.

The objects are still separated by '$' characters to simplify parsing.

An Example CSV file can be found here

Not the answer you're looking for? Browse other questions tagged animation animation-nodes csv or ask your own question.

2
Animation nodes - Driving scale attribute from a CSV list to create a bar chart
3
Keyframed animation from csv using animation nodes
2
Keyframing specified object location at frame from csv data
3
Packing and Animating Rectangles in Animation Nodes
0
instance objects according to list of discrete times (via csv, json, etc) in animation nodes (or just with python)
0
Store data in Animation Nodes
4
Using python, how can I update a text object in a blender animation, every 10 frames, using data from a csv file containing 8million data points?