How does one seamlessly loop an animation containing a Noise modifier?

I've searched and found some ineffective "solutions" to the issue I am experiencing.

I am animating a flickering candle flame and there is probably a much easier/more effective way to do this, however, I'm extremely new to Blender and CGI in general.

I have an object that I applied my candle flame shader to and opted to use a Noise modifier in the Graph Editor to manipulate the X, Y and Z scale of said object.

Mixing in an emission shader to the object did not give the effect I was going for. I opted to add a point light behind the object and again, use a Noise modifier in the Graph Editor to manipulate the Power and Z location. I also added a low Watt point light in front of the object, to illuminate the front surface, since the light behind washed out the flame shader due to transparency. (I believe)

I've been able to closely match the power of the light to the flame "flicker" size as well.

Where I'm falling short is the seamless loop of the animation. My first and last frames are not even close so there is a stutter at the end/beginning of the animation loop.

I really want to stick with Eevee as the Render Engine using Blender 2.8.

I suppose the gist of all this are the questions I have. 1) Is there a more effective/more simple way to achieve this effect using Eevee? 2) Is there a way to make the loop seamless while using the Noise modifier without having to endlessly tinker with the Noise settings to align the first and last frames?

The video is here: https://youtu.be/qjzqhZsvGBw

There is no audio since I don't have a mic yet.

To loop a noise-based animation

One approach, I can't guarantee it's the snappiest, but it has some advantages.

You could use the NLA editor, to make an action loopable, in much the same way as you would make an image tileable in an image editing application. For an image, you might split it down the middle, swap left and right halves, and blend across the discontinuities at the center. Same here. 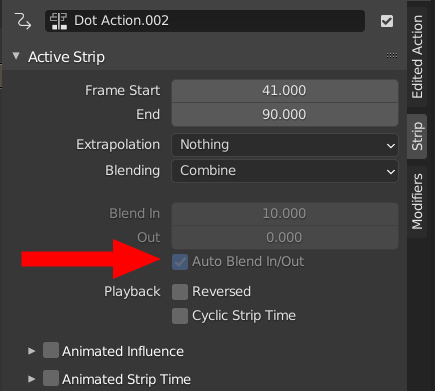 .. Which can be baked into an action in its own right by using 3D View > Header > Object > Animation > Bake Action. You can reuse and adjust the loopable noise action with other objects, so long as the same properties are being animated, or even cut and paste the keyframes between channels of different types.

I would try to adjust the animation length so that it fills two conditions:

Have you tried adding the F-curve modifier? Make it cyclic, and I believe it should start the animation on the correct frames. I think the hotkey is ctrl + shift + M ?

Since the time of posting, some textures have been updated to 4 dimensional, which may change the parameters of the question.

However, I have a related answer here that I thought would be applicable. In particular, if you offset the coordinate space origin and then rotate in such a way that the noise texture moves upwards through the flame it should provide you with texture distortions that rise just as the hot gas from a flame would rise through the surrounding atmosphere.

Not the answer you're looking for? Browse other questions tagged animation graph-editor loop or ask your own question.

2
Animating a rotation but with acceleration
2
How do you animate or otherwise envelope the noise of an animation?
5
How to create a seamless animation loop in Blender?
0
Light point power keyframes not showing up in graph editor
2
How to make noise more square-like?
1
Seamless Noise Loop
0
How to make a curve smooth in the Graph Editor when you restrict the frames of the noise modifier