I have imported a mesh from Makehuman, and I started creating and assigning vertex groups using the "c" key and choosing the vertices. The problem is that many vertices are missed from the selection and not assigned to a vertex group. I don't know how to assign every single vertex to form n vertex_groups in a fast way without missing any vertices? Because missing vertices cause me a problem and also it took me hours doing this.

You could assign the vertex groups (VGs) starting from a hand make sure that you name the groups with suffixes e.g ForeArm.L, ForeArm.R (this is required to let Blender know which vertex groups correspond).

Deselect (MMB while in Select Mode) all vertices which should not belong to the ForeArm VG. Note that you can also use already assigned VGs to help exact deselecting (especially for the head and upper body parts).

Repeat this process for all VG assignments on one side. 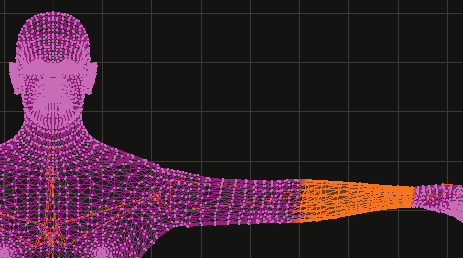 Finally use Mirror Vertex Group to copy the VG data from one side to the other, Note that empty VGs with matching names are required.

The mirror isn't very intuitive due to its prerequisites, therefore I suggest first to watch the video and first try it with a single VG:

From the docs of Mirror Modifier

Vertex Groups When this button is enabled, the Mirror modifier will try to mirror existing vertex groups. A very nice feature, but that has quite specific prerequisites. First, the vertex groups you want to mirror must be named following the usual left/right pattern (i.e. suffixed by something like “.R”, “.right”, “.L”, et cetera). Next, you must have the “mirrored” groups already existing (i.e. same names suffixed by the “other side”) and completely empty (no vertex assigned to it), else it won’t work. Usually, the mirrored copies of the vertices of a group remain in this group. Once this option is activated, all groups following the rules described above will only be valid on the original object – the mirrored copy will put these same vertices into the “mirror” group. Very handy with armatures, for example: you just model half of your object, carefully rig it with half of your armature, and just let the Mirror modifier build the other half. Just be sure to put your Armature modifier(s) after the Mirror one. A final word about multi-axes mirror: in these cases, the “direct”, “first level” copies get the mirrored groups, the copies of copies (“second level”) get the original groups, et cetera.

4
How to connect a mesh vertex groups with an armature bones
0
more than one vertex group for one bone
3
Assigning vertex groups to bones precisely
0
Imported OBJ Groups to Vertex Groups
1
Rigging mesh with vertex weights: different weights have the same influence
1
I want to Transfer Weights from a Vertex or Multiple Vertexes one VG to Another in the Same Mesh Object using Python
2
How do you see what vertex groups are assigned to a bone?