Emission based on volume

I have a principled shader with the transmission set to 1.0 plugged into the surface input of my material output. I have an emission shader plugged into the volume input. I'd like the material to grow brighter the deeper into the mesh it is, somewhat akin to the image below.

How would I make my emission be stronger on the inside of a mesh based upon volume? This preferably would not need to include any custom scripts.

EDIT This has absolutely nothing to do with the "duplicate question" candidate. I'm speaking of mesh volume, not the loudness of an audio file. 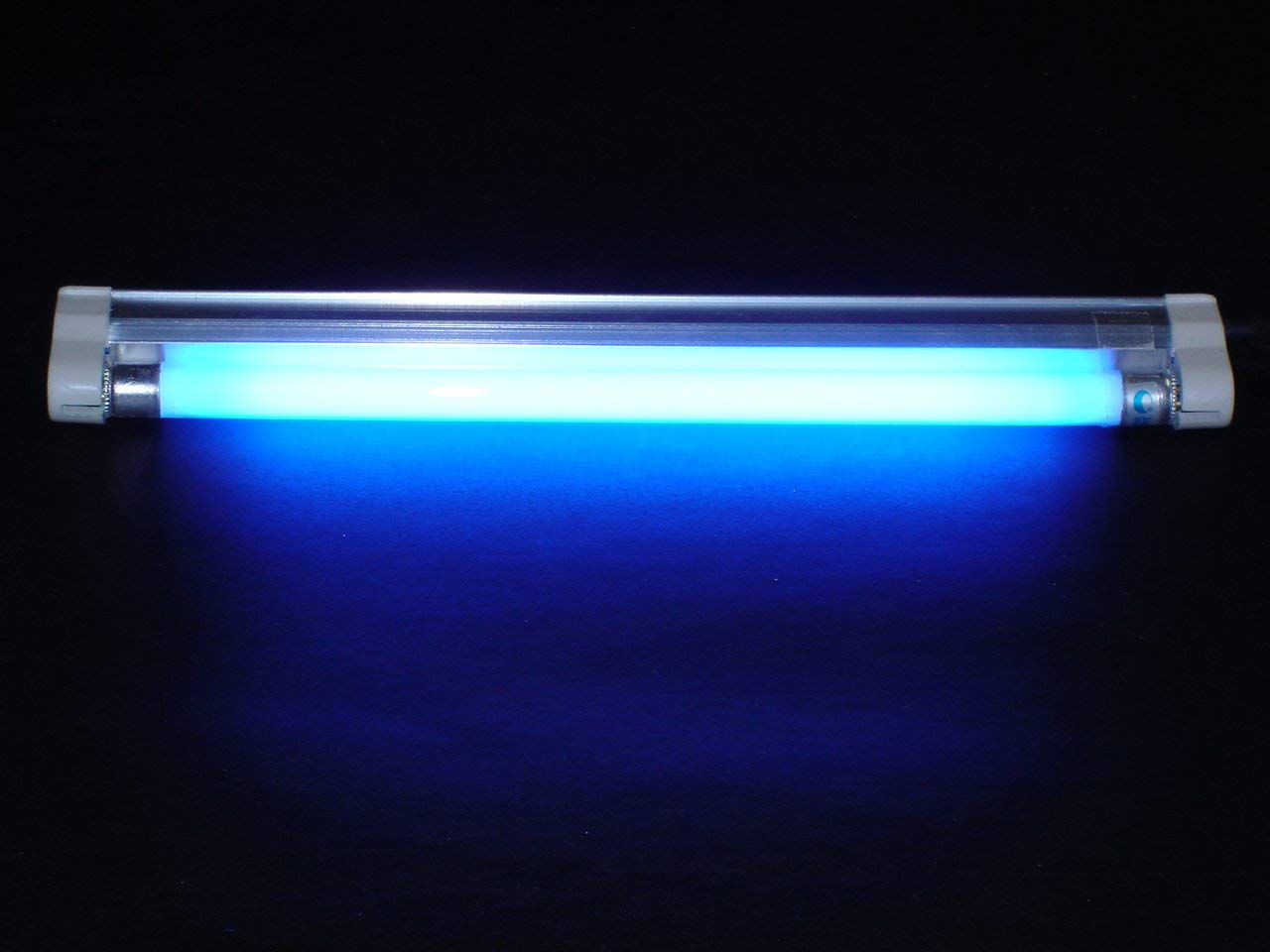 I don't think this is possible with just nodes - there are no facilities to determine the depth below a surface. One solution is to use OSL to add a new node that can 'probe out' the surrounding geometry as in this answer as follows :

Enable Open Shader Language in the Render settings, open a Text Editor window, click New to create a new text block, set the name to something like 'mesh_proximity.osl' and paste the following code :

In the node editor add a Script node and set it to the text block you have just created. If all is well the OSL node will be compiled and you should have a new node that can be used in a Volume shader and provides Min, Max, and Average distance. This can be used as in the following material : 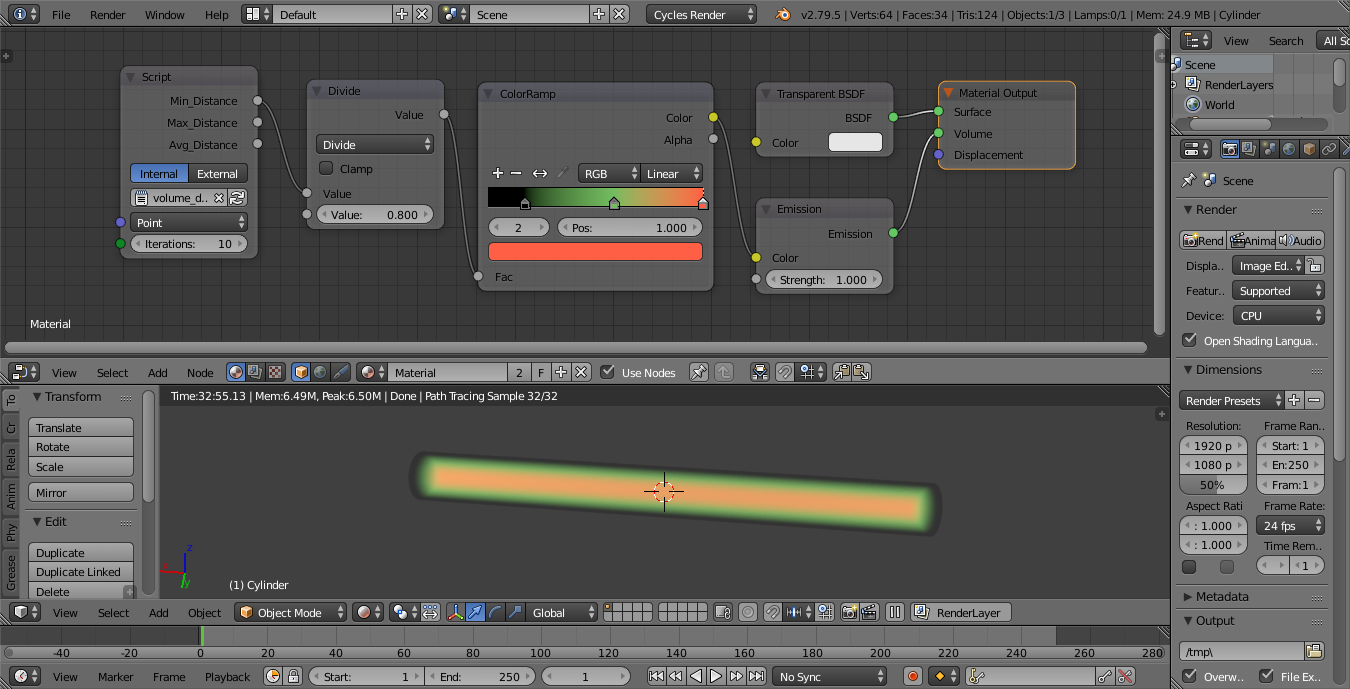 The new node projects rays from the sample point in the volume, determining how far they have travelled until they hit a surface. The number of rays is controlled by the Iterations - more rays results in less noise but takes longer to calculate. The Min_Distance returns the shortest distance for any of those rays, the Max_Distance the longest distance for any of those rays, and the Avg_Distance the average distance for all of those probe rays. Adjust the Divide node to scale the gradient and adjust the color ramp to adjust how the emission changes below the surface - similar can be done to control emission strength as well as color. 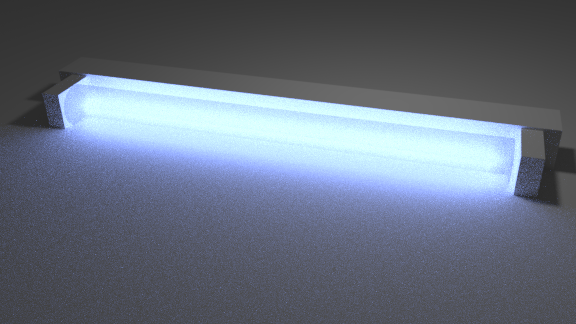 I have tried other solutions, without resorting to OSL (since OSL is not GPU compatible - you'll only be able to render on CPU) - such as using a smoke simulation to diffuse smoke out of the volume to achieve a gradient - but so far without success.

One promising alternative solution is to use a Point Density texture acting on a large number of particles distributed evenly over the surface using Grid distribution. However, you do need to increase the resolution quite high.

To achive this, add a Particle System to the mesh and set it to Emit From Faces with Grid enabled and Hexagonal Grid. Increase the particle grid Resolution until you have enough particles to give a dense enough covering (you might need to click in the field and type a values as the 'soft' limit is only 50. Then add the create the following nodes for the material : 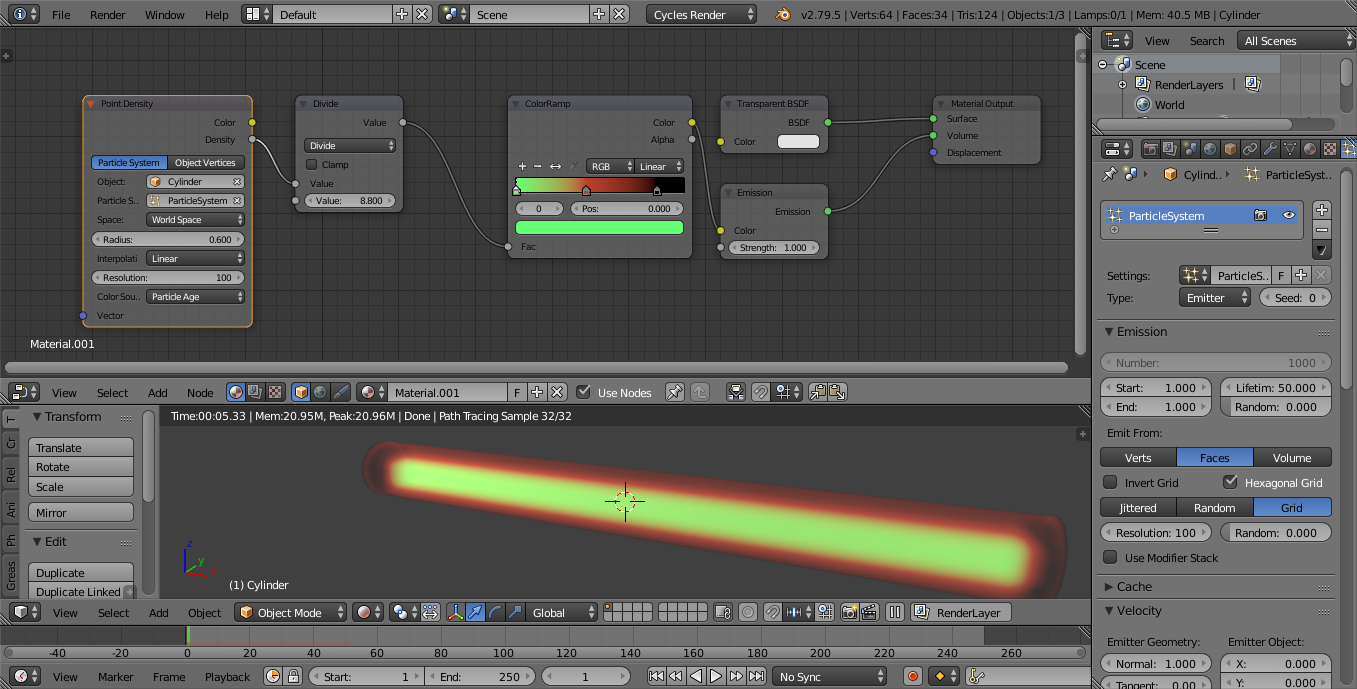 Set the Object to your mesh and select the Particle System with Space set to 'World Space'. You can vary the Radius and Resolution to vary the effect. The Divide node can be used to vary the distance of the effect of the Color Ramp.

My previous answer was based on scale, however I found a driver-based (not script) answer that should solve your problem.

However you need to Enable Autorun if you have not already done so in order for that answer to work.

Here are some screenshots of my setup. The blend file is below them.

The driver paths for the dimensions are as follows:

And here is my finished setup (note that you can edit drivers in the Drivers view of the Graph Editor): 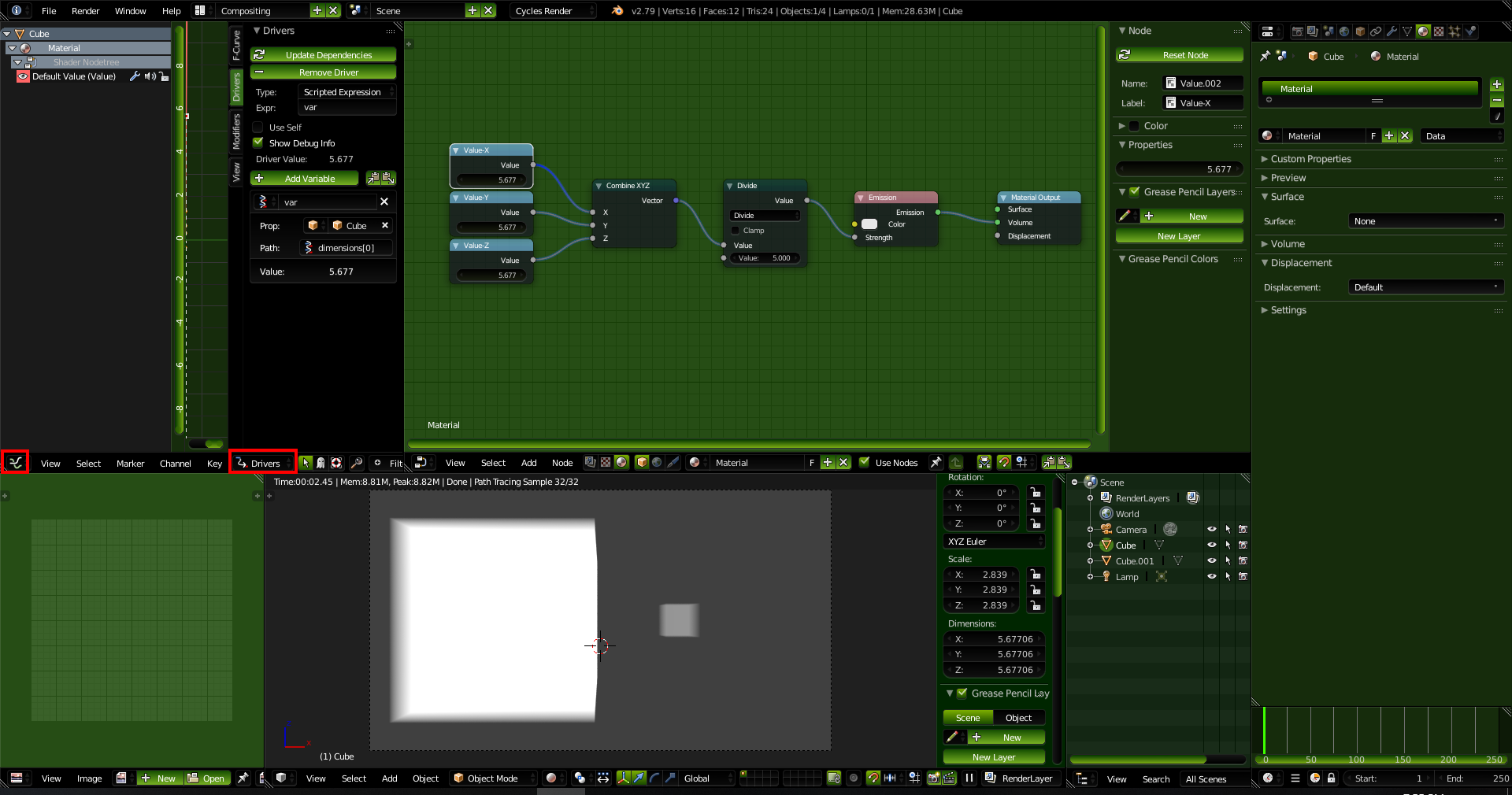 Here, have a code block. Copy and paste it into notepad and save it as "emission-scaler.py". Load it into the text editor in Blender and then press the "Run Script" button whenever you change the scale and voila, the emission is set.

Here is a screenshot of the script at work. Also the last line of that code came from here. 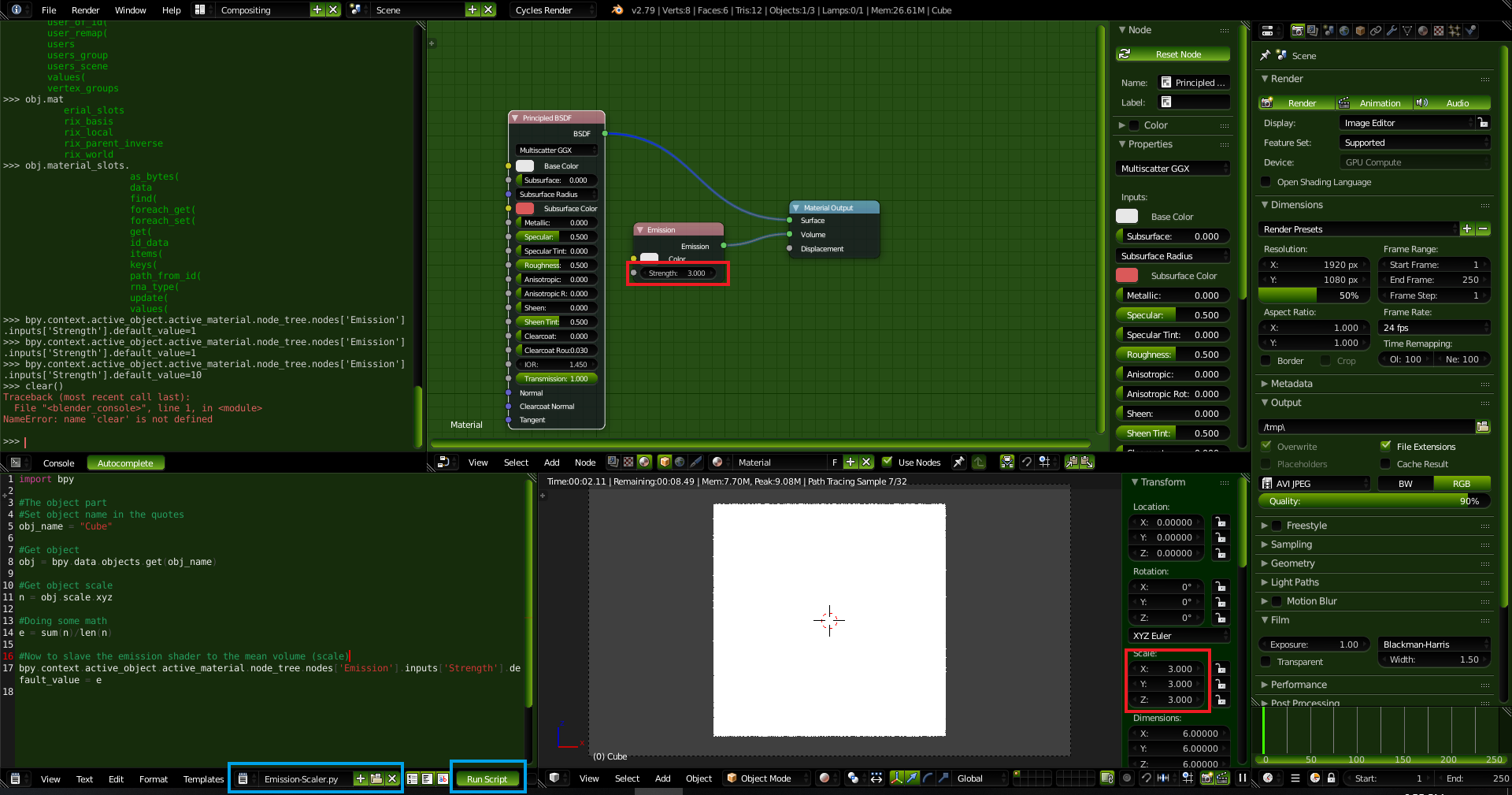 so here is my setup. Let me know if this works for you? This is simple and i think its self explanatory! You can use the color ramp to change the depth and use the multiply node to give the strength to the emission shader! 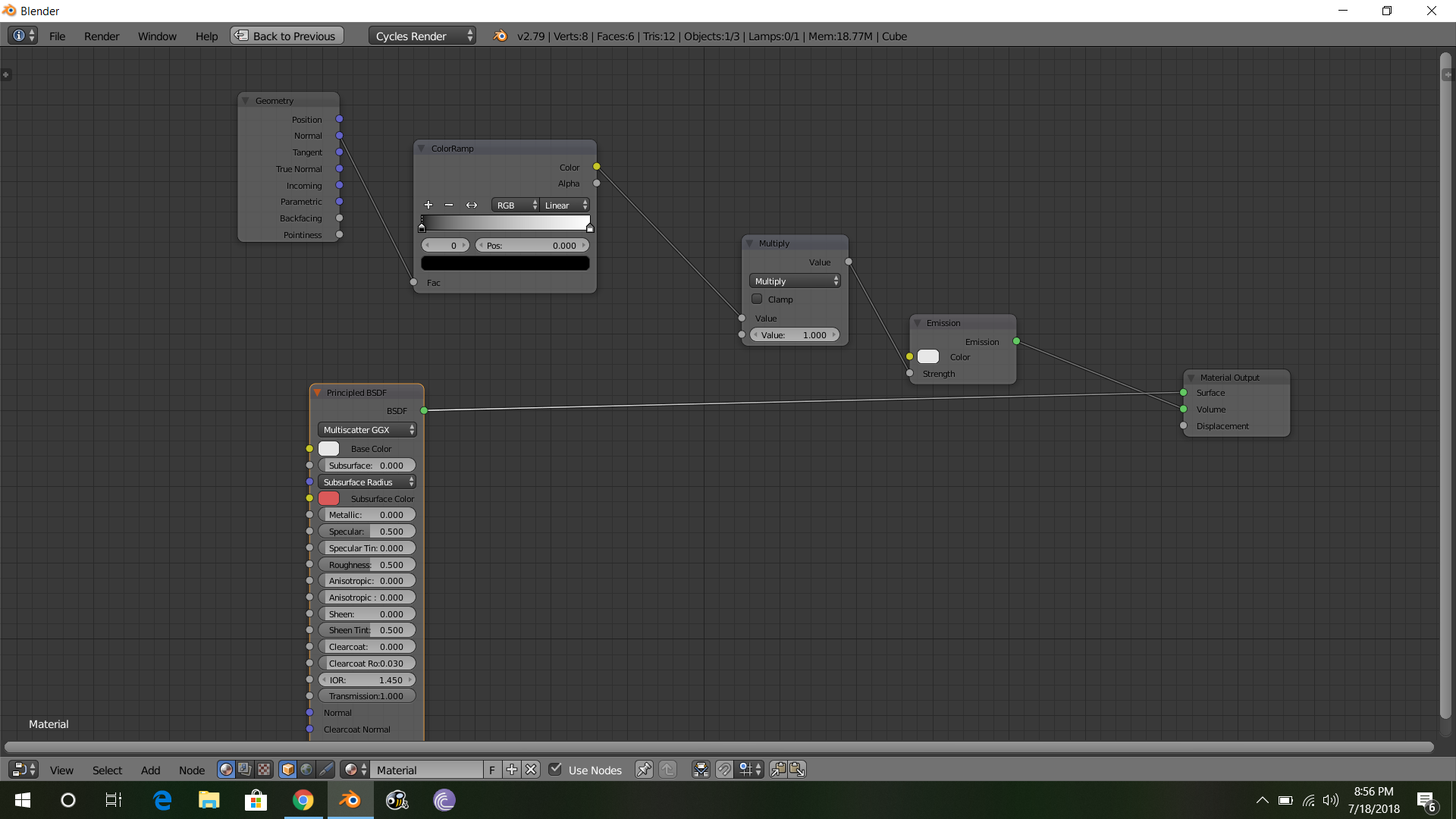 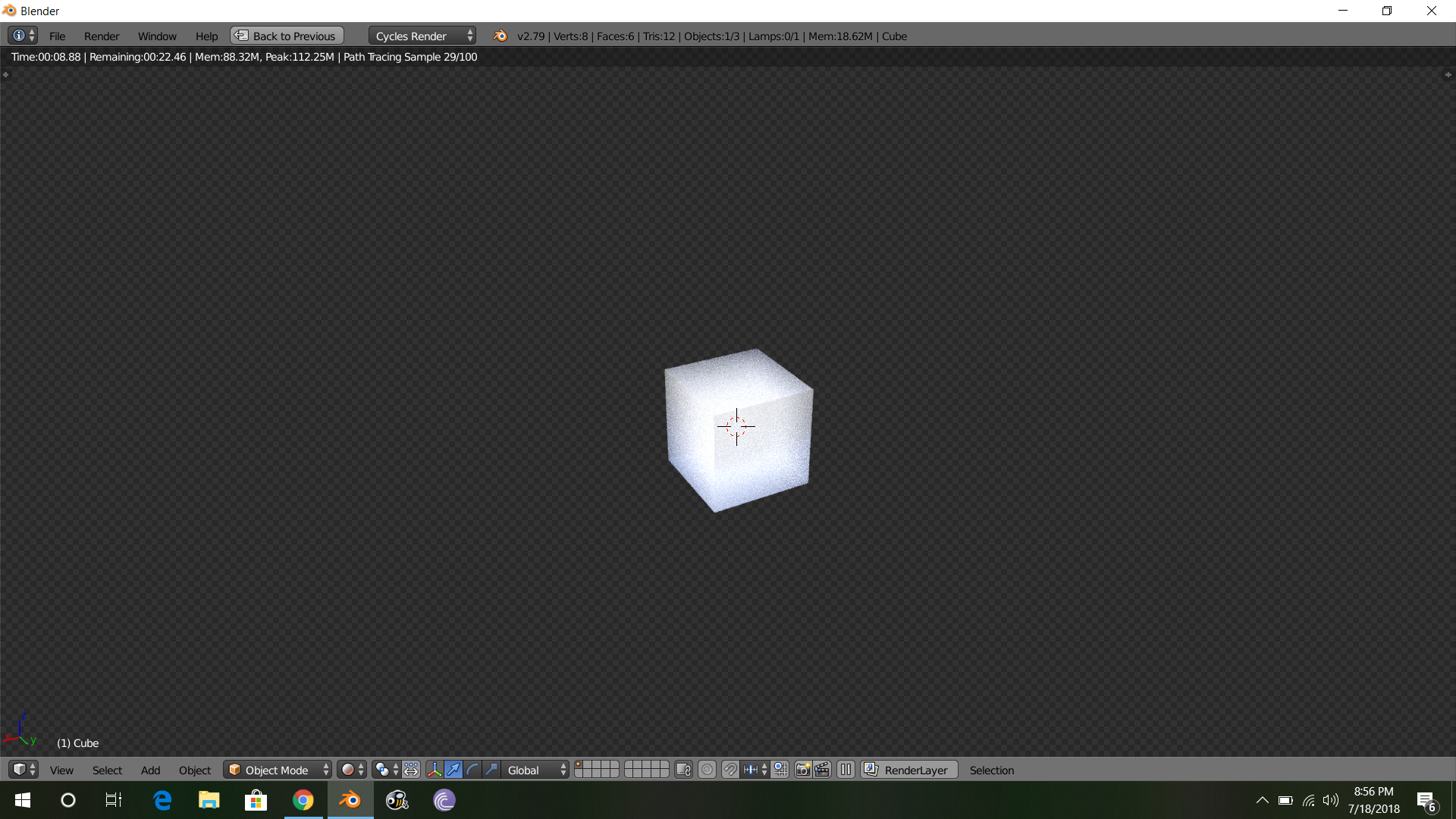 Given the image you post and the explanation about increasing the emission strength based on the mesh volume I created this Node Setup: 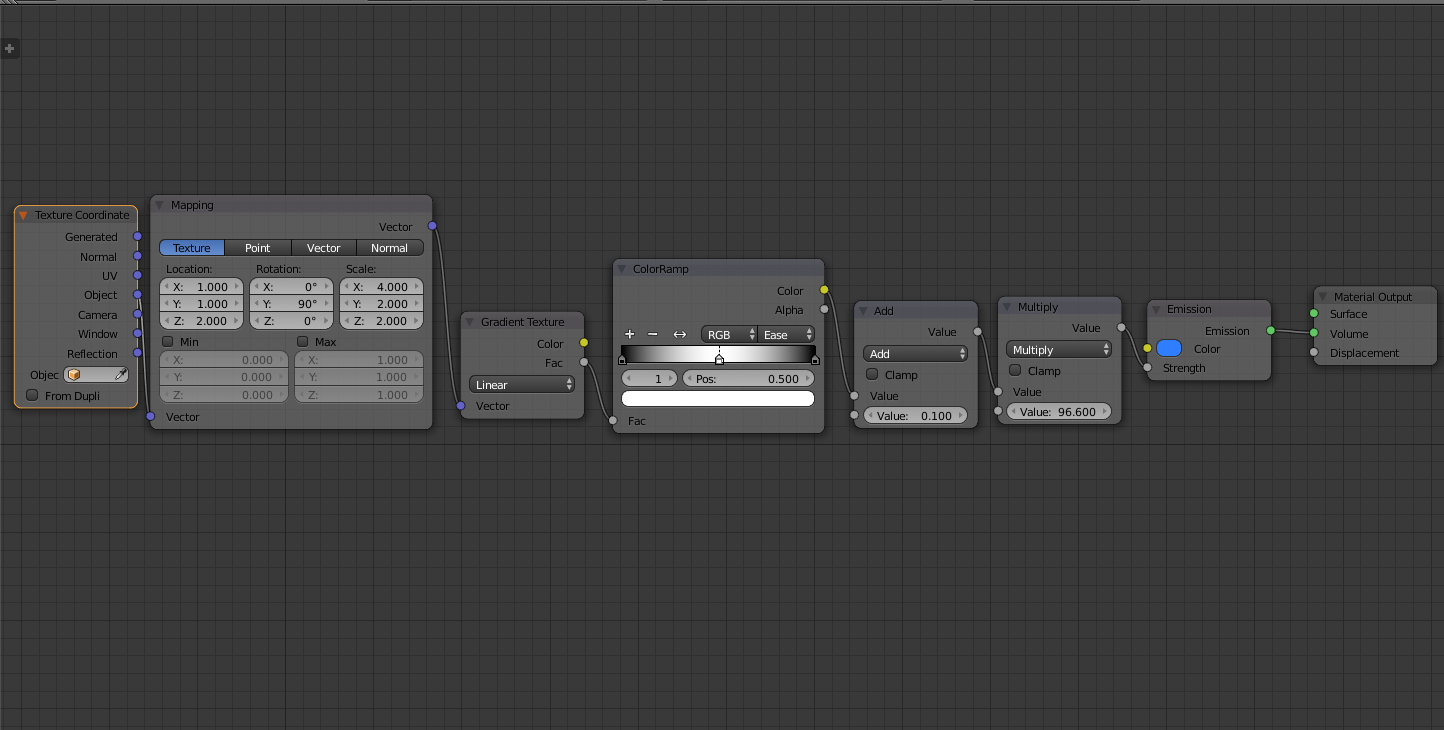 Altough is true that in the center of the cylinder the volume is greater than in the borders, the difference is almost null 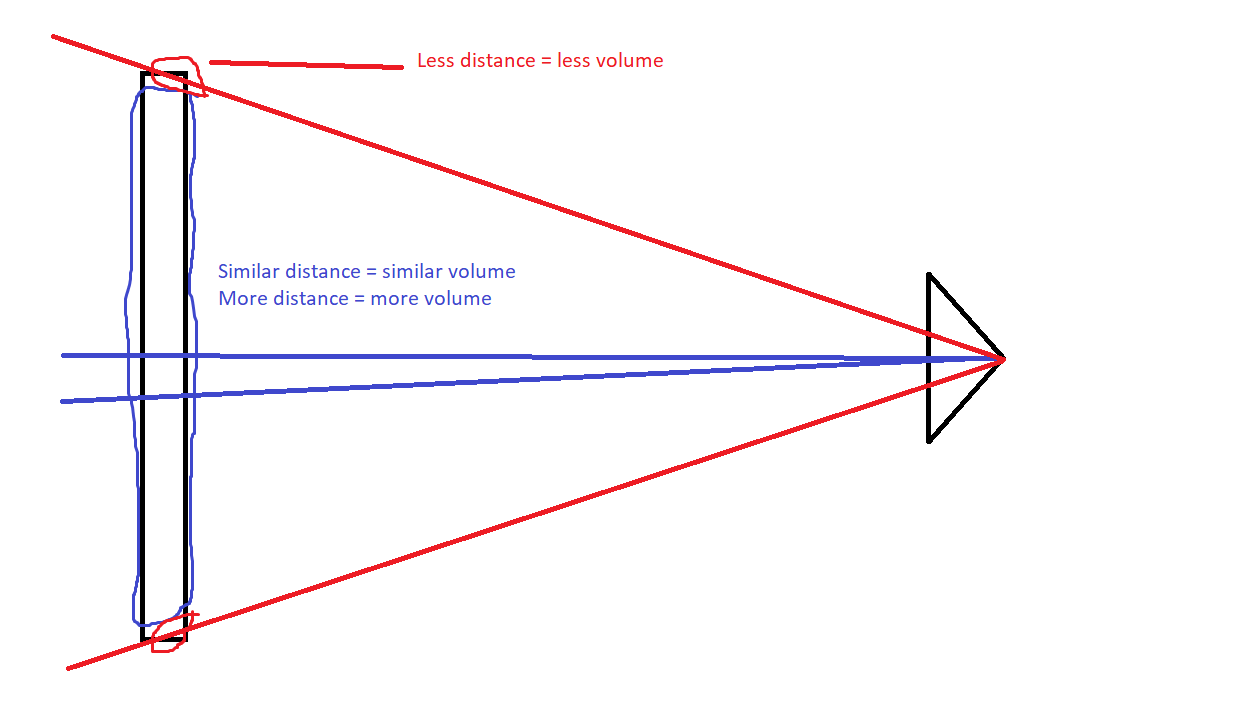 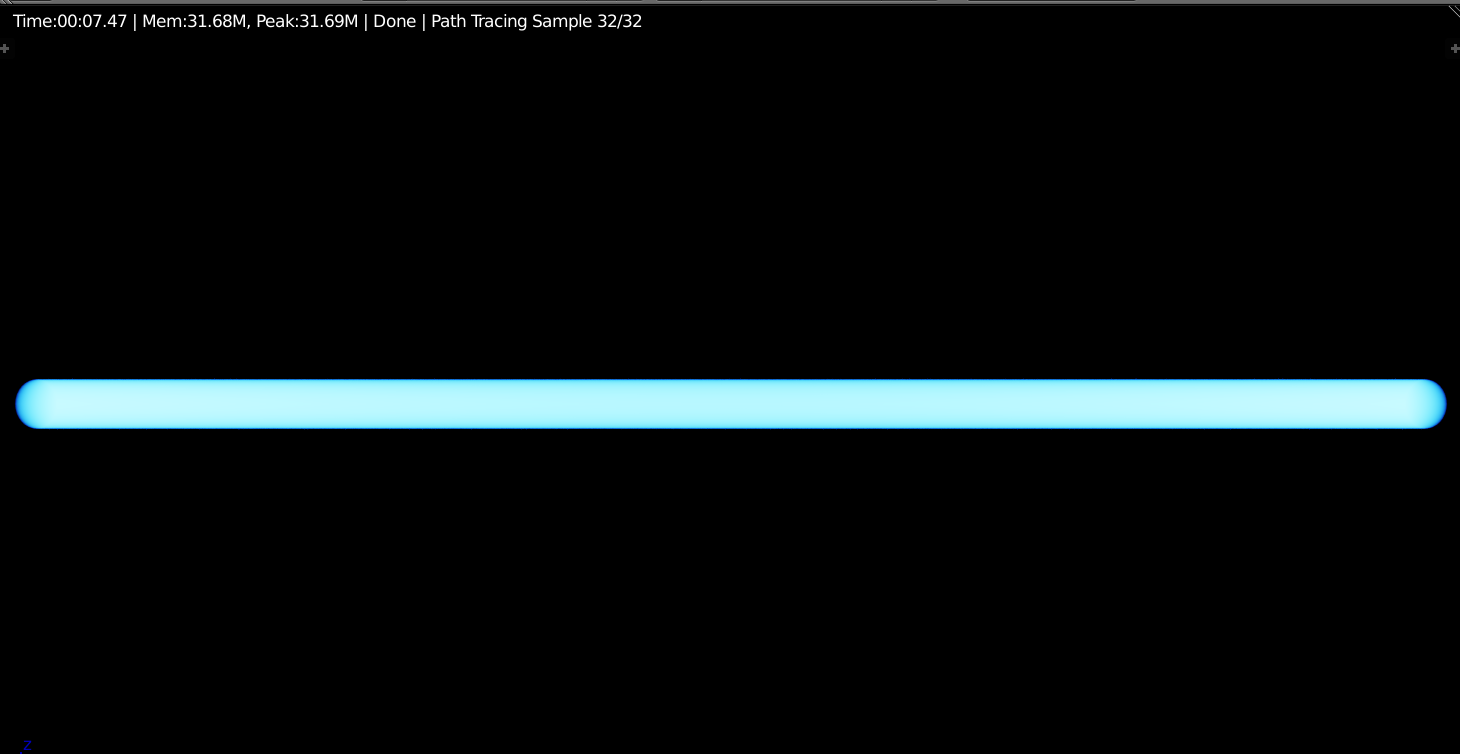 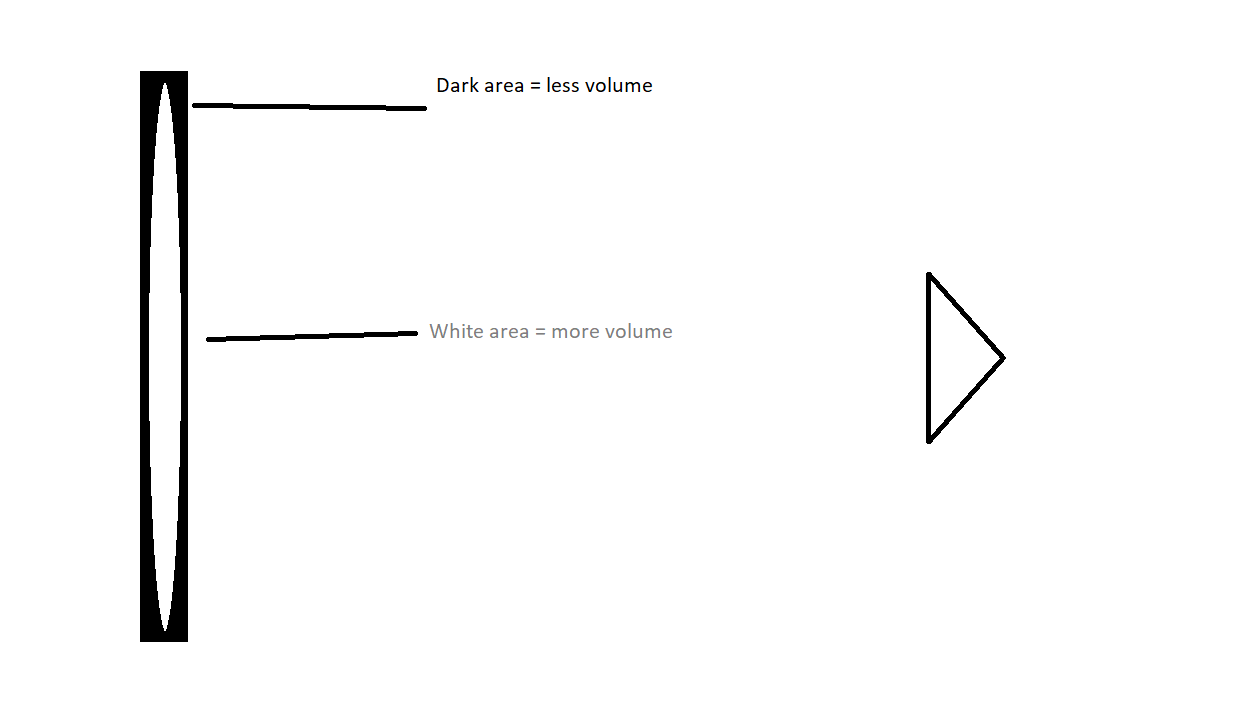 It can seems like cheating and no physically accurate, but it's not far from reality, since in neon lights the halogen gas is not evenly distributed

15
Distance from the surface as an input node for use with volumetric materials
4
What does 'Autorun disabled' statement mean?
6
Can I get the object dimensions in Cycles?
4
Keyframing emission shader colour/strength using python

4
Is it possible to vary the material color by location for a fluid?
26
How to understand the math behind Andrew Price's embedding his beer within his glass
2
What is causing the bright edges on this mesh when using volume emission shaders?
1
Low light emission color
0
Way to make a gradient for emission strength based on elevation
0
Time Lapse Video-week to week transition animation