Time delay when selecting objects in a python script!

I am trying to create a simple script in python that will allow me to select objects from my scene. What I did, is created a scene, and added 3 objects, a cube, a sphere and a cylinder, and they are named; Cube, Sphere and a Cylinder , respectively. I am trying to create a python script in which I want to select these objects within a time delay. So for example I want to select the Cylinder, then 1 second later I want to select the Cube and then 1 second after that I want to select the Sphere. At the end of my script all 3 objects should be selected. In my script they are all getting selected but they all get selected instantaneously at the end of the program. I used the time module for python to create the time delay of 1 second after I select one object, but it doesn't seem like the time delay does anything, because all 3 objects gets selected simultaneously. Here is my python script and blender project.

Firstly, I create an empty list, which i then fill up with the name of all the objects in my scene, in my case its only 3 objects. I then loop through those objects from my list / scene and select them 1 by 1 with a 1 second delay in between. However when the script ends all the objects are selected instantly. And yes, I did unselect everything before running the script.

Does anyone know how I can fix or re write my code, so when I run the script, it will select an object then wait for 1 second and select the other object and then wait 1 more second after that and select the last object.

Of course, I only used only 3 objects in my scene for simplicity reasons, but this script should of course work for any scene and any number of objects.

It ought to function as intended. Try printing time between iterations. 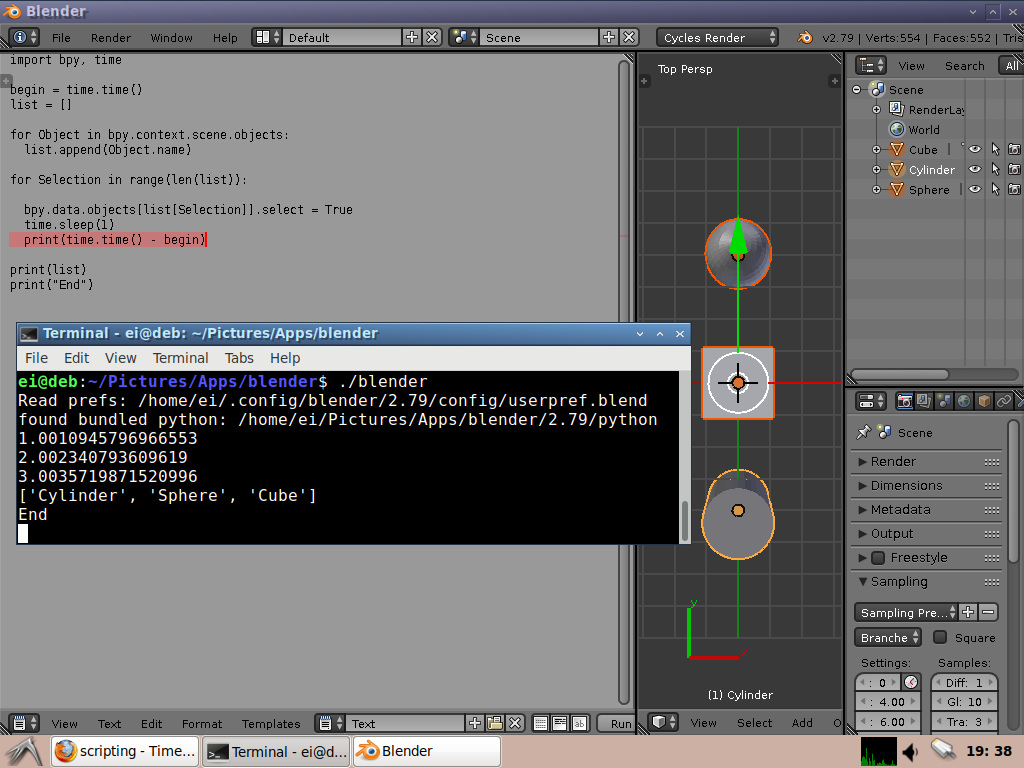 1
Need help moving a set of cubes from one end to the other on x-axis with python scripting
0
Why is the animation blocked at frame 1?
0
How do I display a variable (say elapsed time) in the 3d window?

2
Same Video on each face, but with different time delay?
0
Python script delete objects
1
Creating a python script that will add objects in fixed time intervals
4
Is there a way to Time Delay a Constraint (Like Slow Parent)
2
Python Join Objects
0
Error when processing a blender file in Python