Slide two edge loops away from each other

I've been looking for this feature in Blender, either upon the time of creation using Edge Cut and Slide or afterwards, in just editing the mesh. I'd like to know if it's possible to evenly slide two edges away from one another in Blender?

Here's a picture of what I'd like to be able to do: 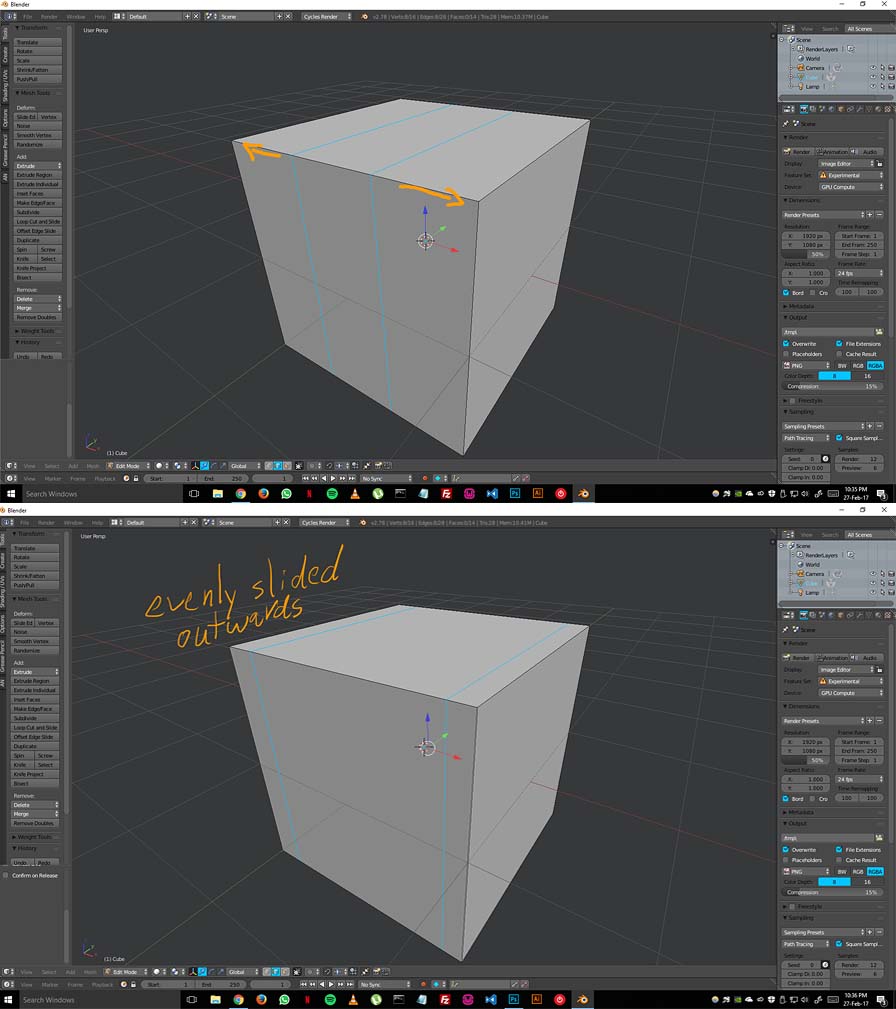 For two existing edgeloops the only way I know of is through scaling. Scale the two edgeloops with S and constraint to the relevant axis with X, Y or Z.

Of course this only works with axis aligned loops, and with evenly sized geometry on both sides, otherwise it will create distortions.

If you don't mind creating new edgeloops then beveling does the trick. Just create a new edge loop with Ctrl + R, then Right Click to leave it in place. Select the newly created edge loop and bevel it with Ctrl + B.

This works even on skewed or twisted geometry, non axis aligned loops, and has the added benefit of allowing absolute dimensions for distance, as opposed to only percentage factors with true edge sliding.

Create an edge loop in the middle of the existing edge loops. Delete the two edge loops. Select the new edge loop, press Ctrl+Shift+R and slide.

This also works when selecting multiple edge loops or faces, so it is definitely superior to beveling. One of the most useful features of blender and somehow I feel that nobody knows it exists, otherwise a lot more tutorials would mention it.

Many operators in blender use parameters that control how the operator gets the end result, some of these can be adjusted by moving the mouse as well as pressing keys and typing in values (look in the header as you adjust the operator) before accepting the end result. We also have the option of adjusting these parameters after accepting the result in the operator panel which can also be seen as a floating palette by pressing F6.

For the edge slide operator we can adjust the factor value (you can type this value instead of moving the mouse) as well as having a few options we can turn on/off. The factor is a value between 1.0 and -1.0 that defines the percentage of movement the edge is moved towards the next edge. A factor of 1.0 slides the edges against one edge loop while -1.0 goes to the opposite edge loop, values in between give you a fractional part of that distance.

Using the factor value it is possible to slide two edge loops the same amount towards the next edge. For example, if the edges between the loops outside of a pair of loops are both 1.0 units from the current loop then you can move both 0.7 of the distance and they will then both be 0.3 from the next loop. Effectively this gives the same result as scaling the loops away from each other.

To quickly do that with the keyboard - ⎇ Alt select a loop - GG.7⏎ Enter and then ⎇ Alt select the other loop GG-.7⏎ Enter

While it is common for two parallel loops to be moved opposite amounts (0.7 and -0.7), you can see in this example that sometimes you will want the same value for both loops. If you enter the value manually, repeatedly pressing - will toggle the direction of the slide.

The even option tries to keep the edge parallel to the next edge loop with flipped working with to the opposite edge.

Select the edge loops that you want to move, and scale with S, then constrain it with X, Y, or Z.

0
Scale edge loops along edge
0
How to increase the Space between two Edge Loops?
2
Slide edges with absolute values
2
2 related(?) questions: How to scale or extrude multiple selections together?
1
Make Evenly Spaced Out Loop Cuts

0
Is it possible to slide an edge beyond the two vertices its attached to?
3
Add vertex without subdividing edge then vertex slide?
2
Is there a way to search and replace in Blender?
4
Adding edge loops based on selected edges
7
How do I insert two edge loops equally spaced from the edges?
0
Sharp edge support loops for cylinder