Multiple Textures in a Complex Object

For example a material I'm working on a material that has a total of three links (a 3 in the texture name field). Is there a way to discover which objects have the other two shared links. This is driving me nuts. I have over 200 objects in my model and I have no idea which objects are sharing links. I need to make them discreet. So I click and make it discreet but every time I enter the material, it shows up as "3" again.

I'd love a capability to right click (or something) on an object and see which other objects are sharing those materials.

But I don't think that feature exist, so where can I find the other two objects using the material so I can make them unique and texture each individually?????

OK, all joined object keep their materials. I get it. But at the same token, when you separate an object "P-by selection" it would be helpful (incredibly helpful) if the separated object only kept the materials it originally had and the remaining joined objects no longer included those materials.

I can't tell you how many times I've joined object that were that were accidentally selected behind the object I was trying to join. Later, I now see I have multiple links and I have no idea which objects share those links so I can make them unique and move on with texturing.

Instead, I'm playing were in the world is Waldo with materials without knowing which are the ones that are linked.

Is there a way to identify which objects are sharing the same material??

The search function in the outliner window should do the trick. 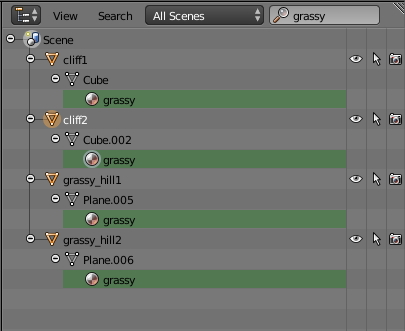 19
How to select all faces with the same material?