Blender 2.8: How to select multiple object with the same diffuse color in principled shader?

I have to import various fbx file scenes , bringing in a large amount (>10.000 Objects) into the scene with each single import. Each import scene stands on its own. Imported fbx files will not be combined. Each object has its own material assigned, and each single material is a material with a principled BSDF. But there are only a few different colors (for example, 10.000 Objects have 10.000 unique materials, but 3333 green ones, 3333 red ones, 3334 blue ones). All of them have the sample principled shader material, they only differ in the diffuse color setting.

The materials in the imported scene are named as follows: 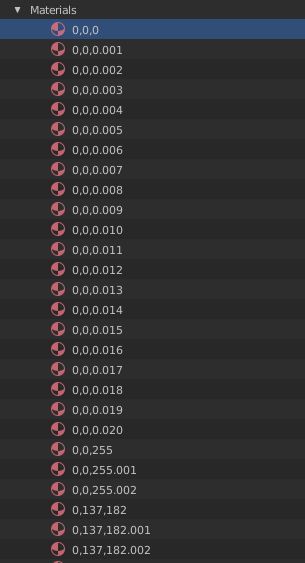 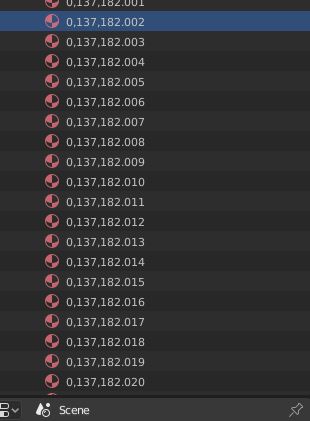 the first digits are always the RGB value channels of the diffuse color of the principled bsdf. The suffix after the "." is the number of copies of the material.

Is there a way to merge all shaders with the same settings, so that in the end there are only three materials instead of 10.000? In simple words: Merge aller materials with the same diffuse color. means 3333 object share one green shader, 3333 objects share one red shader, and 3334 objects share one blue shader? (The numbers are just examples, not the actual amount). In the end, the number of materials will be drastically lower.

I found a similiar topic here, but this one works only for Blender internal and causes an error in Blender 2.8.

Try this out and let me know

Not the answer you're looking for? Browse other questions tagged materials scripting shaders color .fbx or ask your own question.

1
Can I select by color when not the same material?

0
Create smooth vertical gradient with Emission shader and Diffuse shader
1
Can I select by color when not the same material?
9
How do I get transparency to work with the Principled BSDF shader?
3
Transparent image like a decal on mesh with principled BSDF shader
3
Material appearing as bright white or white on some objects while using Eevee Render in 2.8
2
Use Node Setup for various Materials
0
How to get blender to write the correct diffuse color (Kd) in exported .mtl files?
0
Pink material when using 2 x PBR (Principled BSDF) materials into a mix shader w/Eevee
1
How to set up shader materials with main node Principal BSDF