How do I make the f curve 'non-existent', and have simple on/off motions?

I animated a bunch of blinking LED lights, and put key frames on the spots where I want the LED on and off. The LED lights have an f curve to them, currently it's on the more logarithmic curve. I am aware of how to turn the f curves into linear slopes, or how to manually edit an individual curve into a shape I want. What I want is to have the curves non-existent - once it hits the key frame that says "on" it holds this level until it reaches the key frame that says "off". For onstance:

I have twenty LED lights, almost two hundred frames and key frame changes every quarter second. Please tell me there is an easy way to do this:(

Also, is there a way to copy key frames and paste them later on in the dope sheet? Every 48 frames my animation resets, so copying 48 frames four times is easier than doing 192 frames.

What you're looking for is the 'Constant' interpolation type for F-curves.

In the Graph Editor, select the F-curve that you don't want to have 'linear' interpolation by selecting the curve points and then choose Key> Interpolation Mode> Constant: 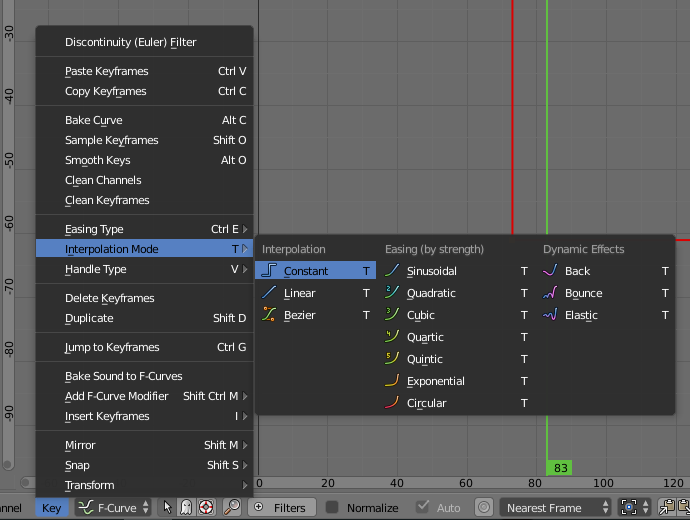 1
How do I make the cubes up and down on the y axis following the curve and without rotating?
1
Blender Fluid Simmulation: How to turn on and off the fluid appearing from inflow?
1
How to modify the graphis curve
0
How can I make my 2d character and background non transparent
1
How to optimize the animation curve
5
How to make animation curve more smooth
1
How to view keyframes of objects that have visibility turned off?