I have a mix-match of computers and want to network render to them. The problem is if I make a material with an image texture, that texture is not sent to the slaves. I don't have the ability to network the image path (I do, but its unreasonably complicated). I just want to have the image file cloned to the slaves so that they can use it in the same way the bake files are sent over.

I tried this in python, but can't find the mechanism to find where the textures should be stored on each local slave. This means if the client texture map is at c:/tmp (on a windows machine) and I send it to a Linux slave, I'll have to jump through flaming hoops to make it save the texture map to c:/tmp on Linux (permissions issues). I'm assuming that it should store them to // on the Linux slave (or any slave) but where is it in perspective to python UserPreferencesFilePaths?

I'm also finding that my motion blur isn't working on network, so I want to tweak the .py file so that it moves over extra bake files (assuming it reads the previous bake file to generate a vector, if the batch is 5 files, it should send over 6 files so that it can properly generate the blur).

I guess what I'm asking is if there is a non-script, non-network-path way to resolve me rendering problems or if there is a scripting way to do it.

You need to pack the external data.

Or you can simply check Automatically Pack Into .blend so that it will automatically save the external data (like images) into the blend file.

Note: this will make your blend file larger. You may not want to do this for every revision, otherwise your file sizes will quickly stack up, because each file will store the images.

About motion blur in network rendering, I don't think that feature is supported yet. However you can try the experimental feature set, and I think it may be enabled, just not "stable". I'm not sure whether they have it there or not though. 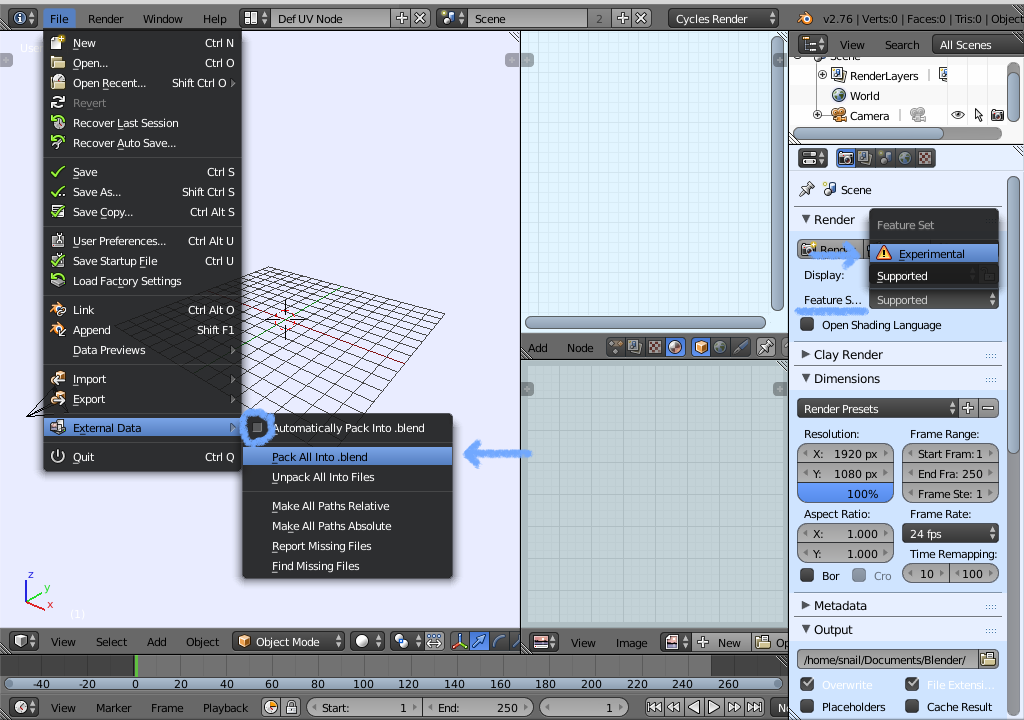 To pack a single image, in the image editor select "image", "pack as PNG".

Not the answer you're looking for? Browse other questions tagged python rendering texture-baking network or ask your own question.