What is the math for the B-spline interpolation of a color ramp with two color stops?

I often use a color ramp with only two color stops as a way to modify the output of a texture parameter as in this example. 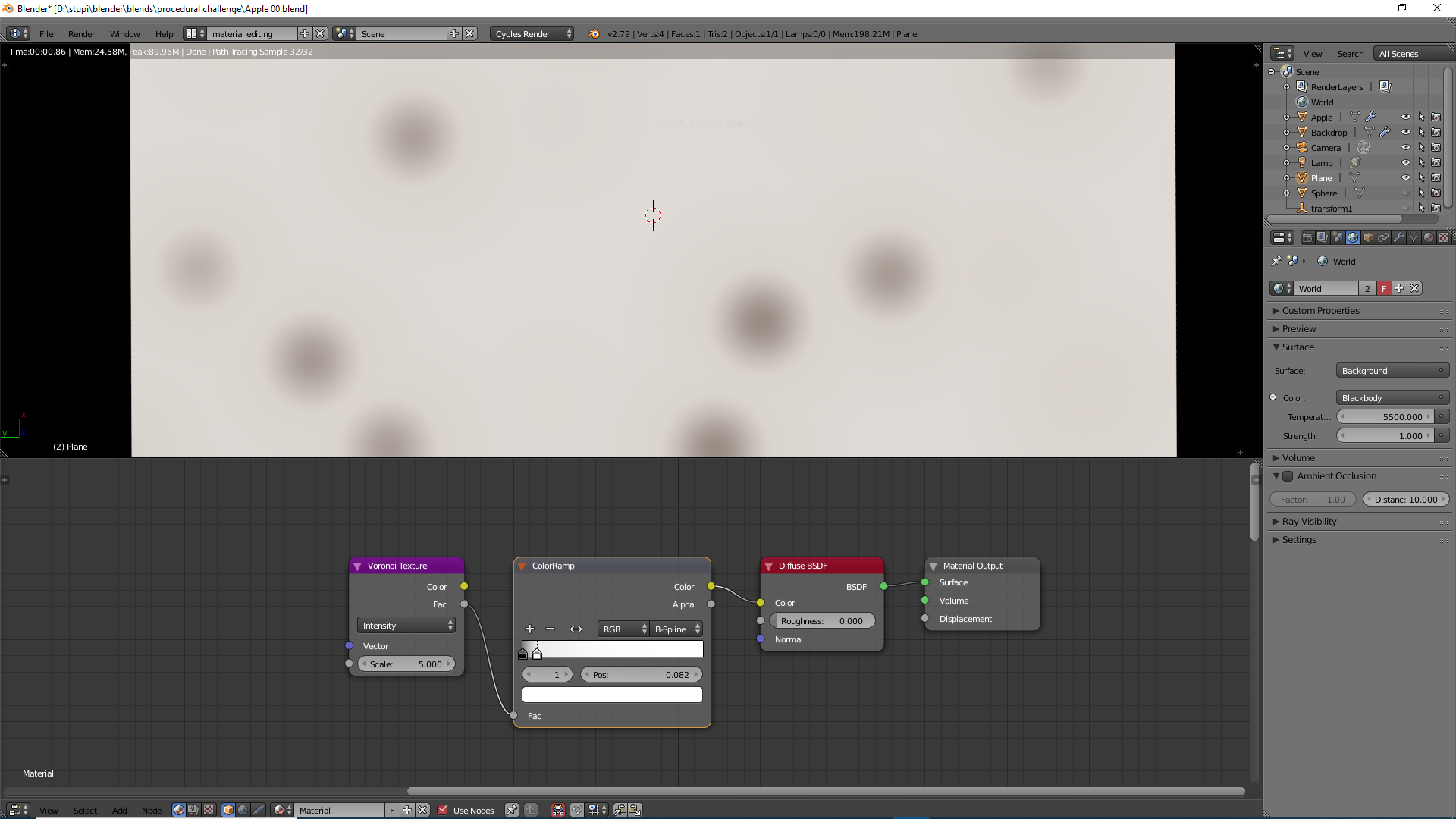 I would like to be able to do something similar in a node group where the positions of the two color stops are input parameters. Such a group might look like this 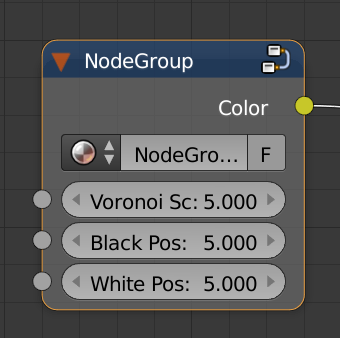 There is a solution for a linear color ramp in this answer.

What is the equation for b-spline?

Implementing B-Spline is quite a bit beyond my maths capabilities but a simple 'ease' is certainly feasible. To achieve this you can calculate the 'influence' of each of the control points and combine these to produce the overall influence. Varying the parameters controls the shape of the curve.

I've created a Desmos example which can be accessed here : https://www.desmos.com/calculator/orfi1cybkc and is as shown in the following image :

Breaking this down a bit, we start with two points along the x-axis defined as p1 and p2 along with associated values v1 and v2 so each point is defined as (p,v). These can be adjusted and positioned as desired.

The variables w and E (exponent) control the shape of the curve. w is present to avoid divide by zero errors by ensuring there is always a small offset from zero, while E controls how the influence of each point drops off over distance. Each influence is determined with :

Once we have the 'influence' of each point (i1, i2) we can combine them with :

To build the nodes I opted to use the Dynamic Maths Expression add-on developed for this answer which can be downloaded from here. The add-on allows you to simply type an equation and the corresponding nodes are automatically built within a node group hidden behind the node. This allows complicated expressions to be very easily constructed.

For instance, for the 'influence' calculation I used the following equation :

This produces the following node :

Within the node are the following generated nodes to implement the specified expression :

Similar can be done with 'Distance' and 'Output' as shown in the following (all wrapped within a Group for convenience) :

This node group can now be used to produce the required 'easing' curve as demonstrated with this example : 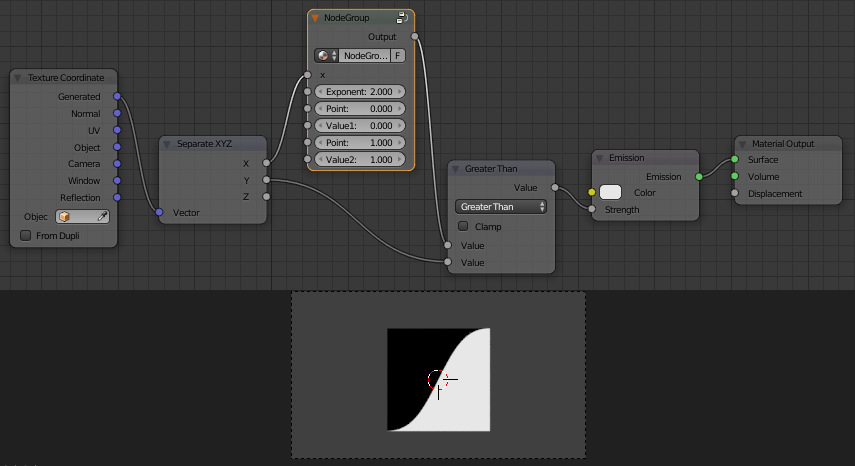 Using an exponent of 1.0 will produce a straight line :

Exponents less than 1.0 will produce the opposite curve : 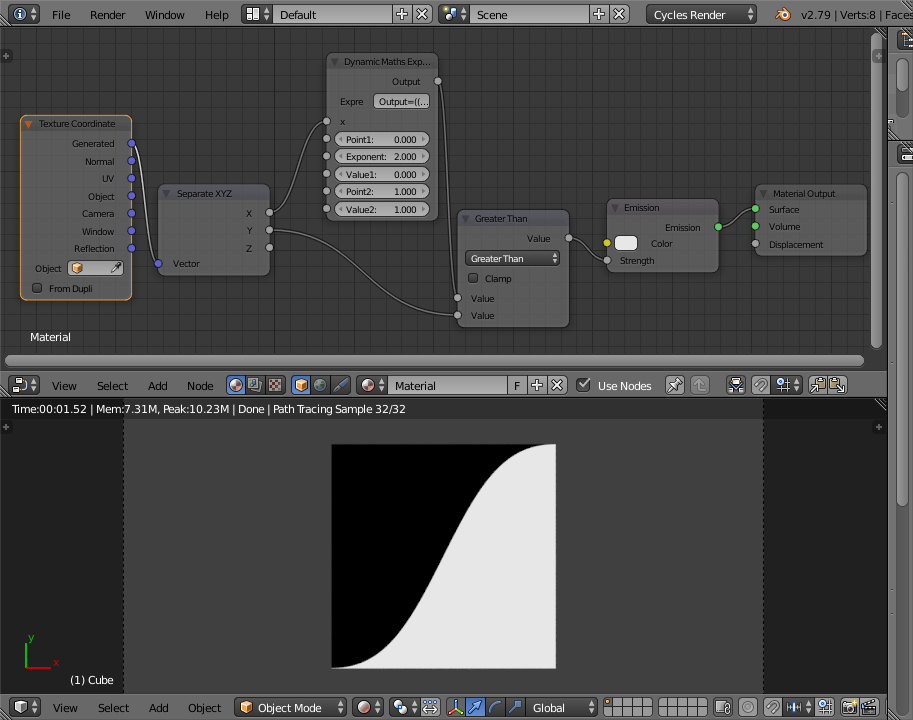 This avoids the complexity of the additional level of node groups but will be slightly less efficient (due to the 'influence' needing to be effectively calculated twice for each 'point'). Note also that the add-on creates the node with the input variables in the order they are presented in the equation and this results in 'x', 'Point1', 'Exponent', 'Value1', etc. - rather than a more intuitive sequence. Being able to specify the order of the input sockets would be a useful addition to the add-on.

Not the answer you're looking for? Browse other questions tagged texturing mathematics or ask your own question.

69
Is there a tool for scientific visualization using Blender?
4
Material Editor: Generate mask from color ID texture
3
Why does voronoi texture switch use intensity coloring when ramped?
12
Build color ramp out of math nodes?
8
how does the color ramp interpolation work?
0
One node group input override another
15
Correct vector input to map texture light in Cycles
2
Is it possible to add noise or other type of texture between color ramp stops?
0
Creating mesh on a surface with two variables