I want to use color ramps or RGB curve effects in my node groups. This runs into the problem that the only sockets these nodes have is their input image and factor. This means if I have them in a group, I cannot control the actual ramp/curve stops with inputs from outside the group.

Is it possible to build a custom math node group that would do the same thing as a color ramp or RGB curve, but would allow me access to an equivalent of stops?

Unfortunately there is no way to create a group node exactly like the Color Ramp, where you can add and remove color swatches at will. To get around this I have created a node with two movable swatches, you can then combine multiple of these nodes together to have the functionality of multiple swatches. 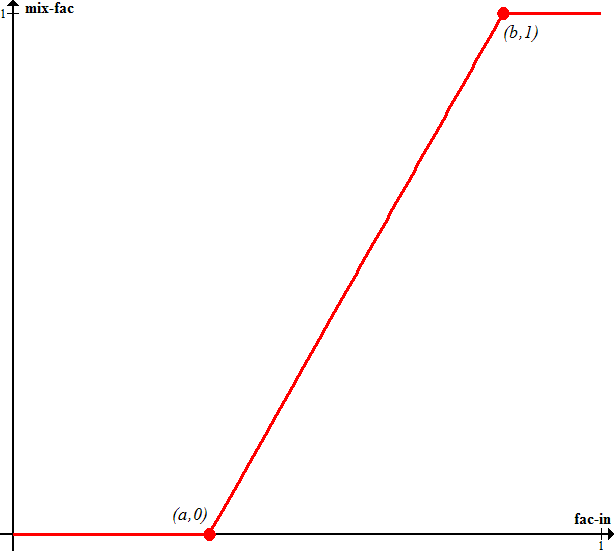 Not the answer you're looking for? Browse other questions tagged cycles-render-engine node-editor mathematics or ask your own question.

28
Control a property with no socket (color ramp swatch, etc) from a Group Node input?
13
Cycles node editor - Map gray scale value map to extremes
4
'color' and 'position' input for Color Ramp node?
7
Is it possible to pass a [color ramp] to a node group?
3
What is the math for the B-spline interpolation of a color ramp with two color stops?
3
Can I make a node group driver independent of materials?

2
Use ID properties in cycles/nodes
1
Share custom compositor nodes among blend files
1
Is there a way to separate colors from chained mix rgb nodes?
4
What is an example of when I can use the 'Clamp' option in the MixRGB node?
21
Cycles Materials Math node with more than two inputs
4
Vector math to get Curve object silhouette
3
What is the math for the B-spline interpolation of a color ramp with two color stops?
7
Is it possible to pass a [color ramp] to a node group?