Archimesh: Undoing bad topology with the walls: How?

Alright, allow me to specify. There is an add-on in Blender named Archimesh. It allows you to create rooms, including walls. You can add depth to those walls.

Previously, putting in windows meant cutting the holes into the walls you made with Archimesh. At the current time, I was unable to find out how. Now, Archimesh has a feature to fix that: Auto-holes. The windows spawn with a bound box. That bound box acts as the cookie cutter for the walls. This works wonders, except for a tiny problem I ran into:

I am not sure if this applies to a point before adding depth to the walls or even after, but if you check edit mode, you will notice you are unable to even touch the part of the wall created with the depth slider, though the initial wall is fine. This was not a problem until I added a few windows, but then I checked edit mode to make sure the topology was correct. Much like last time, I was right: It was not. Last time, I did not ask about this here. This time, I am:

Is there any way to edit the topology or somehow interact with it in order to?

Maybe I have to finalize it, but I have no idea how to.

This is about editing the topology of the wall where the topology goes wrong. (See inset below; images not embedded for sake of readability and remaining concise.) 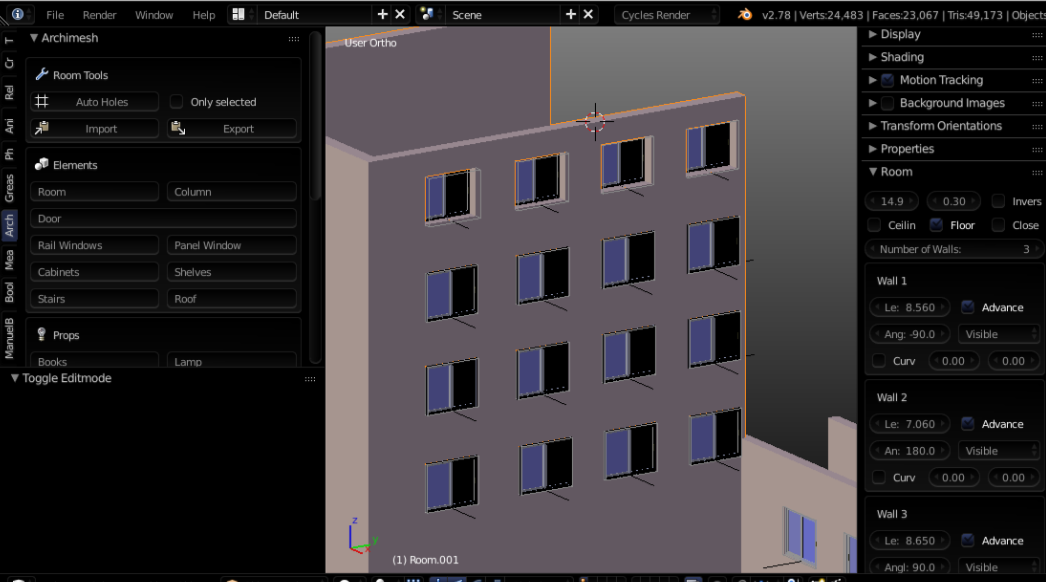 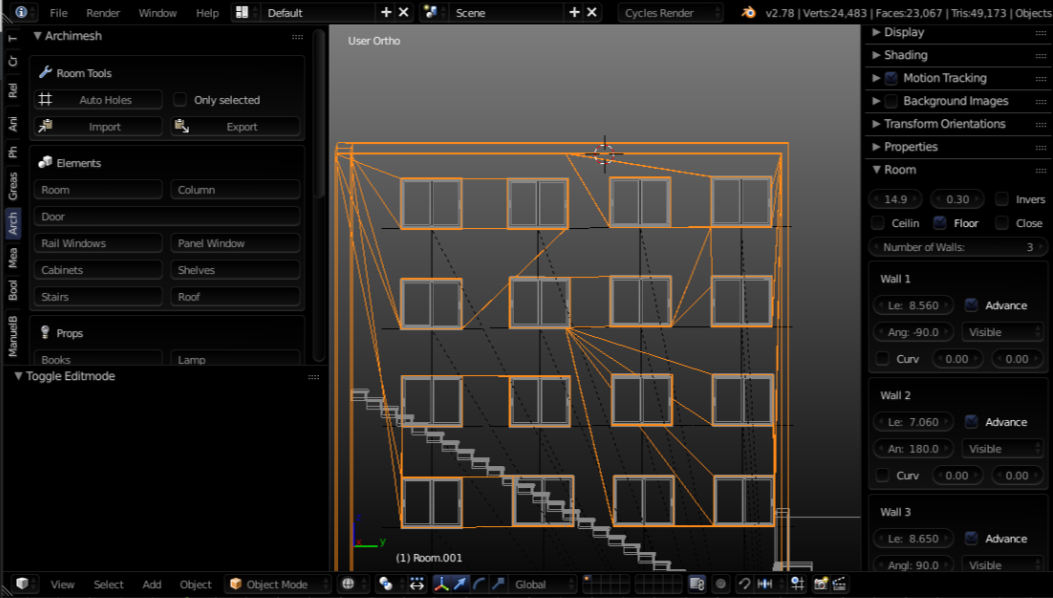 If this keeps up, auto-holes will stop working properly, as sooner or later, the cuts are bound to fail in some way, much like it did, last time I recall.

Is there any way to fix the topology here? I fear I will have to be very careful with how many windows I put into the building wall.

If you want to edit freely with archimesh objects, you'd have to convert them to meshes (select your object then click object > convert to > mesh from curve/meta/surf/text) but it may compromise your archimesh tools with more complex models. Archimesh objects don't give you freedom in edit mode and most edits affect the whole mesh and/or aren't flexible at all, so I personally found that converting objects to a mesh and making most doors from scratch was a lot better for me because I prefer more freedom and flexibility.

And for the auto holes to work properly in general, the doors/windows need to be thinner than the walls which makes sense but also takes some time playing around with. And the minute you make even the slightest change, the hole disappears and you have to check "Auto holes" again and again.

If you want to create your own doors/holes with the same archimesh walls without converting it to a mesh, the Bisect tool works best. Loops and knife cuts cause too much complication with archimesh objects due to the lack of freedom so Bisect tool is your best choice.