Sliding an edge loop in an imported image distorts the image (blender 2.81)

Is there another way to do loop cut-slide in 2.81 on images that I haven't seen yet?

In the tool menu for Loop Cut and Slide (after making a loop cut once), check 'Correct UVs' and it should work as you expected. 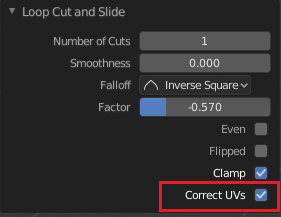 You need to enable Correct UVs option, when creating the loopcut.
It is located in the pop-up menu.
Once enabled, it stays that way.

This works for Loopcuts, Edge slides and other tools.

By the way - you can still slide Loop cuts before committing.
No need to use Edge slide tool.

7
How to slide geometry past an edge?
3
Loop cut entirely after dissolving an edge
3
Extrude along an edge loop by vertex
5
How to use absolute value in Loopcut and edge slide?
0
How to model a spoon with using edge loop only with no mirror modifier
2
How to rotate half of a plane around the split edge after cutting it in half using loop cut
7
How do I insert two edge loops equally spaced from the edges?