I have written a script in python that successfully saves and loads the position and rotation of my player cube and camera for use between scene transitions. However, something is going wrong with the minimum and maximum rotation values of the mouse look actuator. I have a feeling that I should be adjusting those values in python at the same time I change the camera rotation from the save, but I'm really hung up on this.

Here is the code I wrote:

It's as if these values are being changed by something: 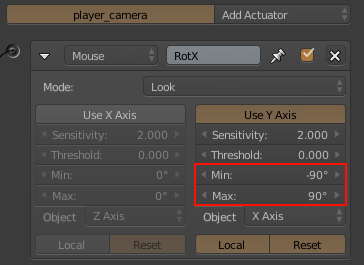 Thank you for your time. I'm really stuck on this.

You should use the actuator.angle attribute, or actuator.angle[0] if only the X value is needed. Here's a example script I made and test file attached here.

Not the answer you're looking for? Browse other questions tagged python game-engine matrix mouse or ask your own question.

8
Setting a Property's min and max values after creation
1
problem with parent actuator in BGE
2
Noob in BGE Just have anything work with python script
1
Blender start with (large) Python script crashes Blender
0
BGE collision bounds script
1
How to set driver distance max and min influence?
0
Blender Game Engine - Trigger something to happen in the future