Why does copy rotation constraint invert after 180 degrees 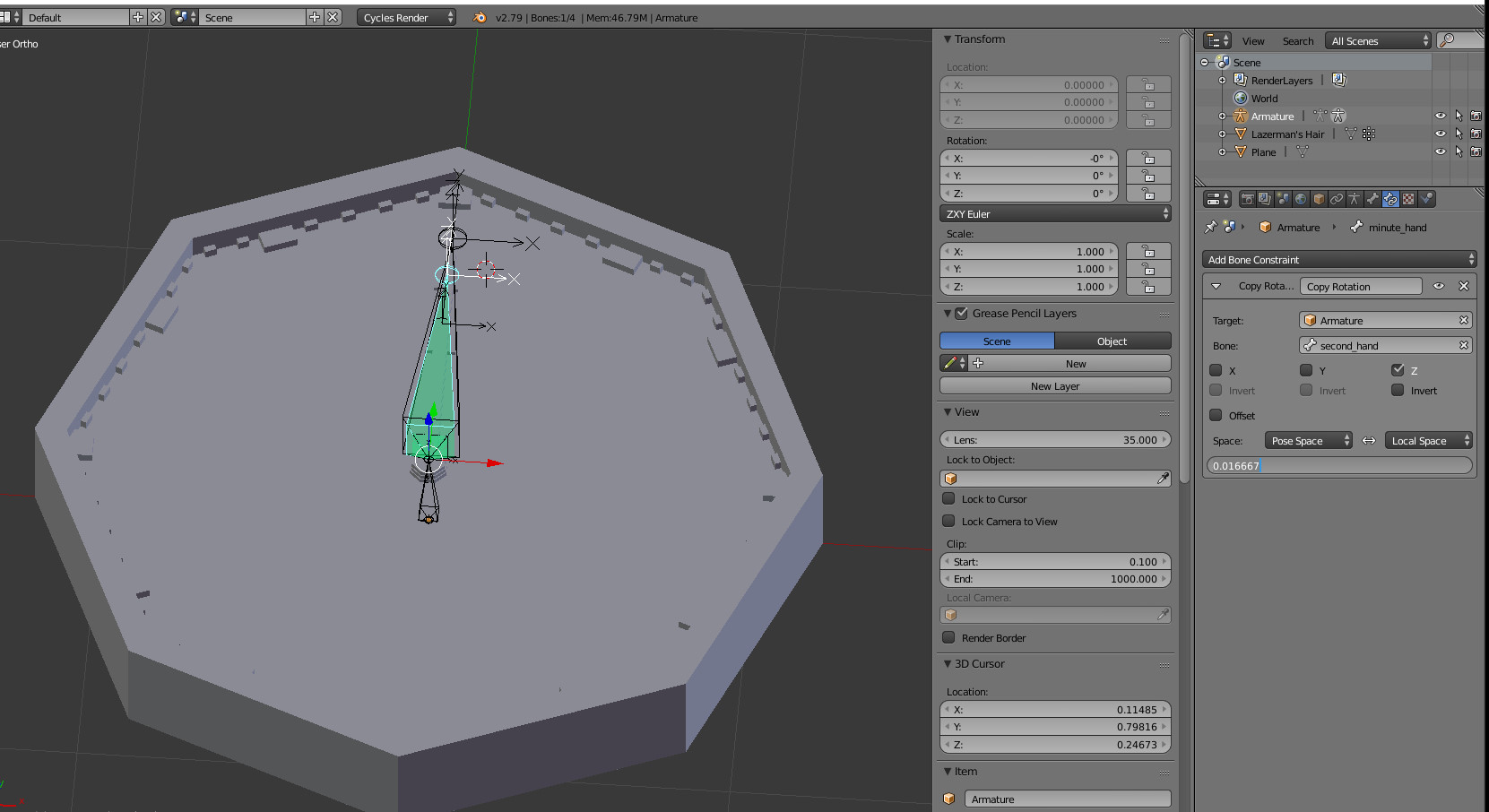 Maybe you can alternatively do it with drivers instead.

Then proceed to the Graph Editor, change to Drivers from the header, and choose the desired channel (Z in this case).

From there open the Properties Panel (N Key), Drivers tab choose the option Scripted Expression and add a new variable.

Use the Transform Chanel option, pick the other hand and choose its $Z$ Rotation. The scripted expression should read something along the lines of $var/12$ so it rotates at one twelfth of the angular speed.

There really seems to be a limitation with rotational constraints. You run into a similar problem if you are using Transformation Constraints instead of Rotation Constraints, where after a full revolution the hour hand would jump back to the 12 position and start again from there. But: Using Transform Constraints you can rig that situation the other way around. In other words, animate the hour hand, and have the minute hand follow accordingly.

Here is a blend file that shows this idea:

And a quick screenshot of the constraint setup: 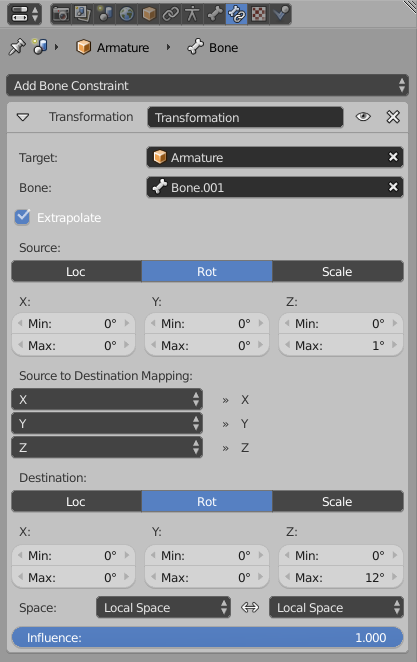 As you can see, I have extrapolate checked, and map from a source rotation to a target rotation in local space. The values I set are simply the time values: If the hour hand moves by one hour, the minute hand shall rotate for 12 hours, or a full revolution of 360 degrees in other words.

The other answers are good solutions, but nobody (so far) has answered your explicit question, which is why this happens.

Here's what Blender does when it figures out a copy rotation constraint:

The important thing to realize here is that an orientation, as a set of rotation triplets back on step 1, is aliased-- there are multiple sets of numbers that can give you a particular rotation. For example, 360 degrees rotation is the same as 0 degrees of rotation, right? In a way, the f-curves contain not just the orientation information, but a little bit extra information-- how many times they've made full rotations already, maybe.

But when we get to step 2, 4x4 matrices are not aliased. There is only a single 4x4 matrix to represent any particular orientation. That extra information about how many times it's already rotated is lost, and is unavailable to any constraints.

(Why do this? Mostly, because of space switching. You can convert orientations to different transformation spaces, but you can't convert "how many times it rotated." That just isn't something that makes the same kind of sense when evaluated in arbitrary spaces.)

So when Blender takes your 190 degree rotation, turns it into a matrix, and then turns it back into triplets, what does it get? It's designed to output results from -180 to 180. So 190 degrees is equal to -170 degrees, and that's what it returns, and that's what gets used by your constraints. If you're using some fraction of this as a multiple, you'll see your constraints jump. Like if you were copying rotation at 0.5 influence, you'd all of a sudden go from 90 degrees rotation to -90 degrees rotation.

Although this question was essentially answered a long time ago. There are few things I want to add.
I encountered the same issue creating what is essentially Ramyans Haircopter. What I found out is that both the Transform and the Rotation Constraints work just fine (tested in 3.0) when the Influence is 1.
However when the Influence is less than 1 (or the transform constraint maps a 180 to a smaller degree) the mentioned issue appears. So if you instead use a Transformation constrain to map from the lower value to the higher value the Issue can be worked around (as showcased in aliasgurus File).
So these mappings are fine:

while these are not:

0
Object Constraint - Object won't make a 360º rotation
1
My rotation driver variable loses a value greater than 180 degrees
0
Folding out shield for games and animations
0
Driver to rotate an object by y degrees every x frames?
0
Linking two objects' rotations with relation to an factor?