How do I make a fluid simulation so it retains its shape till it touches ground?

I am trying to make one of those animation videos where an apparently heavy object is falling on a fragile object. But rather that heavy or rigid object turns out to break or be fluid.

So I made a hammer's head, and a glass. I turned the hammer [head] to fluid and kept it on a height. So when I bake the fluid, on the first frame only it's shape is distorted and it starts looking that its actually fluid. I want it to keep its original shape and act as fluid at the same time. 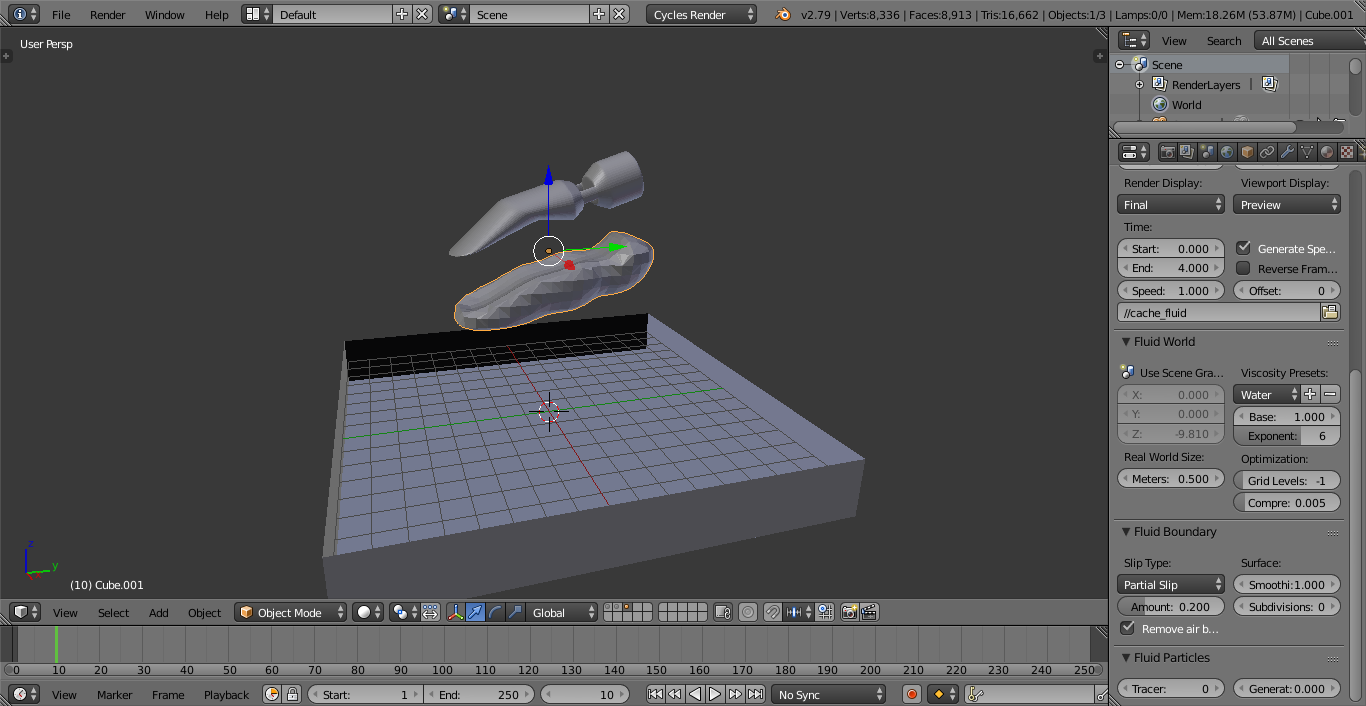 In this image, the glass is kept aside because I wanted to run a try first.

One way to do this:

You will need two hammer head objects. One of them is simulated as fluid, one of them is not. I will call these the "hammer fluid" and "hammer static" objects for short.

Your "hammer fluid" object should be located in the position where you want the fluid simulation to start (i.e., the first frame where the hammer head touches an object / the floor). For convenience let's call this Frame 100. Using keyframes, the viewport and render visibility of the hammer fluid object should be set to OFF from frames 1-99, then ON starting at frame 100. Once you have added the object to your fluid sim (as type "Fluid"), you will want to give it an "Initial Velocity" that is appropriate to whatever the hammer head was doing at the moment (e.g. falling straight down, moving side to side, etc.).

Your "hammer static" object should be visible from frames 1-99, then invisible starting at frame 100, again using keyframes.

From the viewer's perspective, the object will seamlessly transition from the static object to the dynamic object on frame 100.

In terms of the fluid domain, obviously it should be given the fluid material. It should also be invisible from frames 1-99, visible starting on frame 100. You would give the simulation an "offset" (Physics tab, Fluid section, under Time) equal to the transition frame times -1. So in this case the "offset" would be -100.

Quick tip: you won't be able to bake your fluid sim unless you're on a frame where the fluid domain object is visible!

You could try swapping out the material on the hammer for the fluid material for 1 frame before the fluid simulation takes over.

Plug both your materials into a mix shader and simply keyframe the value from 0 to 1 to switch shaders on the frame your collision occurs, then keyframe the "restrict view" property in the inspector to make it disappear, whilst making your fluid simulation appear on the next frame.

Either that, or you could try keyframing gravity and other forces on the fluid sim so they don't affect it until the second frame.

Not the answer you're looking for? Browse other questions tagged animation fluid-simulation or ask your own question.