This is for a point and click first person adventure puzzle game. The inventory is at the bottom of the screen as you can see below. 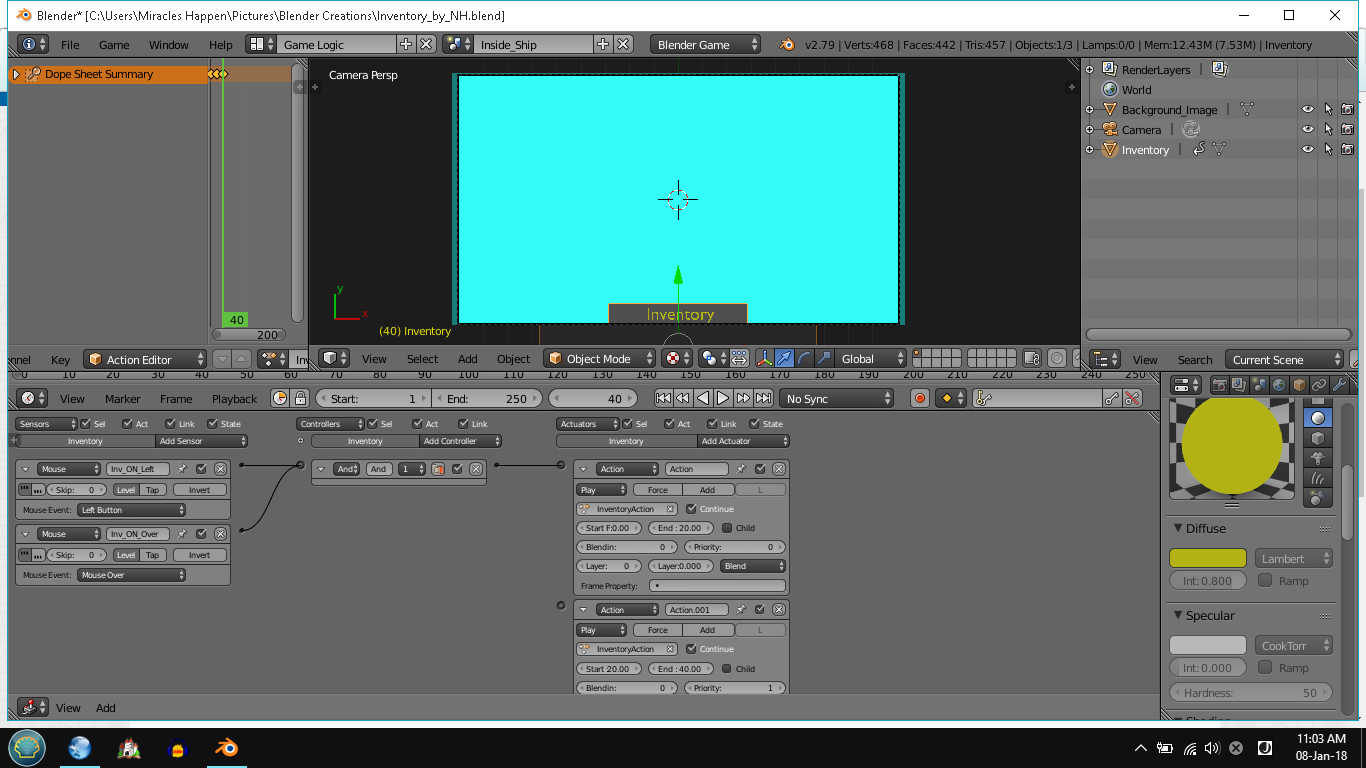 In this kind of game, when you click with your mouse on the box named Inventory, the actual Inventory comes up and its content become visible: 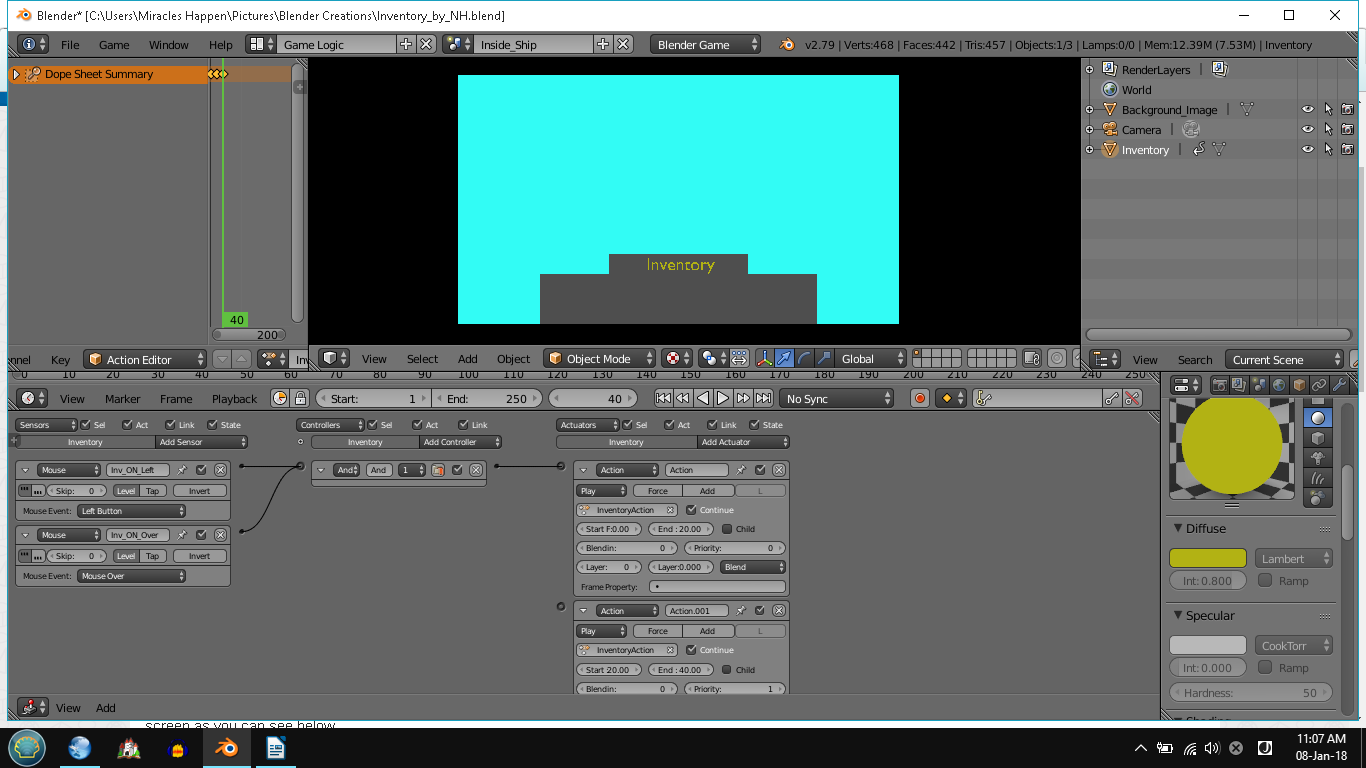 I have managed to make the inventory go up (with an animation) with the following logic bricks: 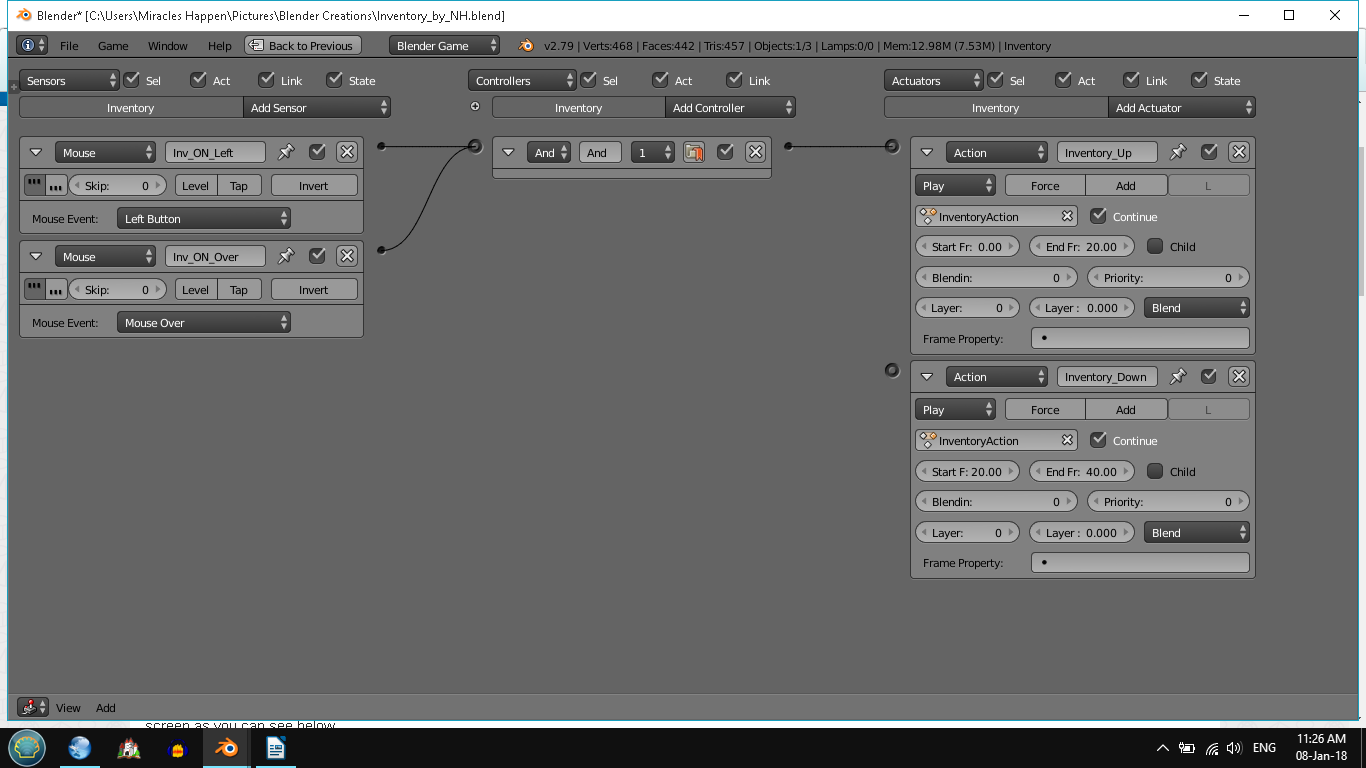 What I need to know is:

How do I trigger the second animation (Inventory goes down)?

It's like an ON and OFF switch that I need to learn how to use so please don't give me any python script (I'm learning that separately).

I need to learn how to activate a series of commands just by MOUSE OVER object and MOUSE LEFT CLICK because this entire game is based on this logic. I want to understand how logic bricks work and unfortunately the manual was of no help for me.

I suggest to use messages to request showing/hiding the inventory. This way you can request both operations from any object you like just by sending an according message.

You need to message subjects:

This can easily be implemented with a point and click logic:

Additional you can set up an equal logic listening to keyboard input. This way the player has the choice to use keyboard or mouse.

The inventory by itself should have a status that is either shown or hidden. As there are just two status you could use true/false, but I think it is better to allow more status that might come later (shown, hidden, short ...).

I recommend to use the build in state machine.

As the names suggest the menu should be fully shown in state "shown" and minimized/hidden in state "hidden".

The initial state can be set at the lower button bar. The upper button bar is to show the logic of the different states.

As we know what the states are good for (semantics) we can now think about when to switch to what state (transition).

The implementation is straight forward:

The above logic switches from one state to another. While the logic of the state machine itself is complete with that, the audience will not see any effect. So we add some operations -> actions (not to be confused with animation actions).

There are four types of actions:

What we wan is to play an action that moves the inventory into the camera's view, when entering show state.

When the hide animation is the reverse of the show animation we can use the flipper mode of the action actuator.

Do not forget to enable the [Level]. It makes the sensor trigger the controller on level change.

(Hint: you can use the same always sensor by temporarily disabling "State" on the sensor column)

You have two buttons right now. You might want to have one button for both show and hide = toggle.

As the messages are exclusive (only one will be considered while the other is ignored) you can send both of them at the same time, to get a toggle button:

When you can't assume the messages are exclusive (e.g. when you have three states) you might want to introduce a "toggle inventory" message.

You add or exchange the show/hide logic:

That's it. Easier than I thought; I just had to get the right pulse mode when triggering the action!

2
How do you make bullets do damagein the BGE?
1
Hold down mouse click but not tap?
1
Creating the effect of a Flip Flop gate using Logic Bricks
0
How to make an inventory system for the Blender Game Engine
0
How to change Parents in my Sliding Menu