Make Efficient Grass For Large Areas In The BGE

I have a VERY large area (about 2-4 sq. km) of a landscape that I need to have covered in 3D grass, like how modern 3D games do it: 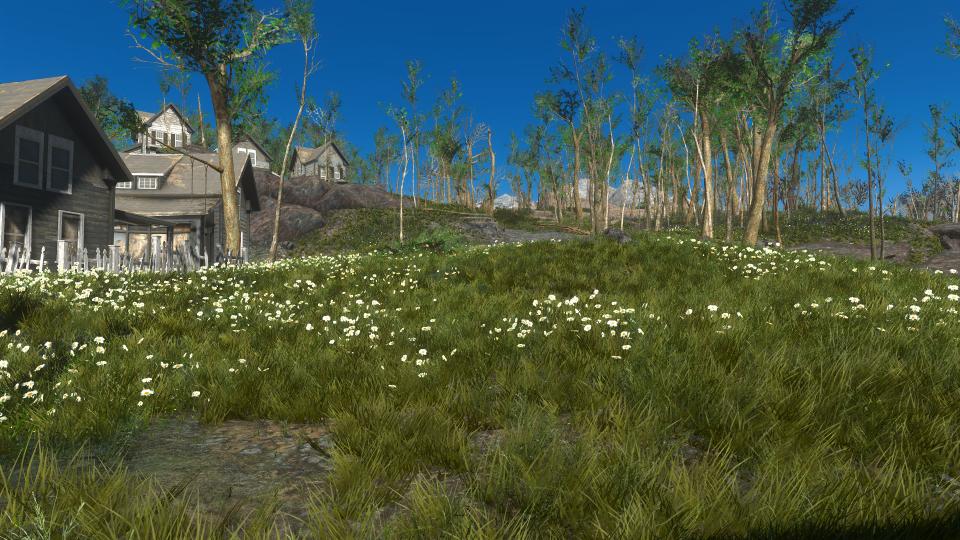 There have been a couple of problems I've been running into though whilst making said grass. In one method I tried using particle systems by switching to the Blender Internal renderer and then creating a particle system and converting them to objects so they can be used with the BGE, but this put an excessive strain on my computer with the 3D Viewport while editing being 1-3 frames per second and the game itself playing even slower, later crashing after about 30 seconds of being tortured with 5 million+ object instances and several tens of millions of polygons to render in real-time.

So I need a way to have consistent result of grass in the manner I have described that gives results like the particle system in terms of consistency and visual results whilst being the least hardware-intensive possible.

Thanks to anyone who contributes.

I believe you have to rely on intersecting textured planes for this. The grass model with 24 tris is way too much (i am assuming actual strands). Additionally you have to "grow" the grass only in the player visible area, and cull it when it gets really far away and substitute with a similar ground texture (even triple A games do this, like Skyrim). Additionally don't forget to have a fustrum size of your sun lamp that doesnt cover the entire landscape, but moves with the player. Drawing shadows is very expensive.

There are more than a few tutorials on how to create good looking grass patches for all kinds of game engines and the underlying principles stay the same for BGE unless the engine uses their own custom grass system.

Here is a tutorial for 3ds max on how to do grass for UE4: https://www.youtube.com/watch?v=B4j5tzAIflU

Here is one in blender (very similar): https://www.youtube.com/watch?v=BKxUKzpx--s

And here is a demo of an implementation of a generative approach in BGE: https://www.youtube.com/watch?v=kN6ftu0H4bQ

You might also want to have a look at different BGE forks like Upbge (https://www.youtube.com/watch?v=fx9JfJyCY6I) and Armory Engine (for better performance in transparency mixing and low poly meshes etc)

Not the answer you're looking for? Browse other questions tagged modeling game-engine particles or ask your own question.

0
how can i control starting point of particles?
0
Controlling particle textures
1
Particle System interact with objects