I saw a guy who made terrains like this - 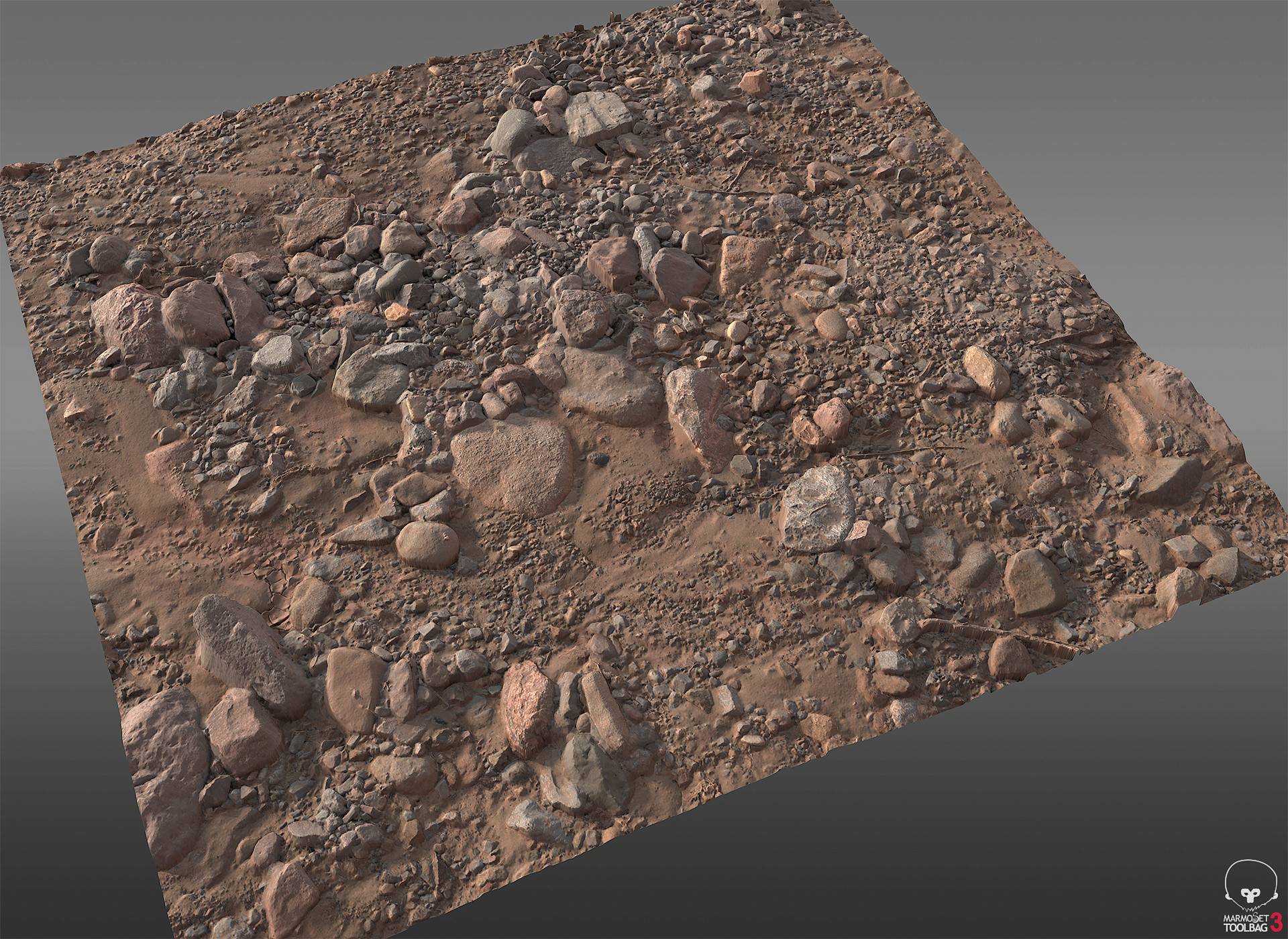 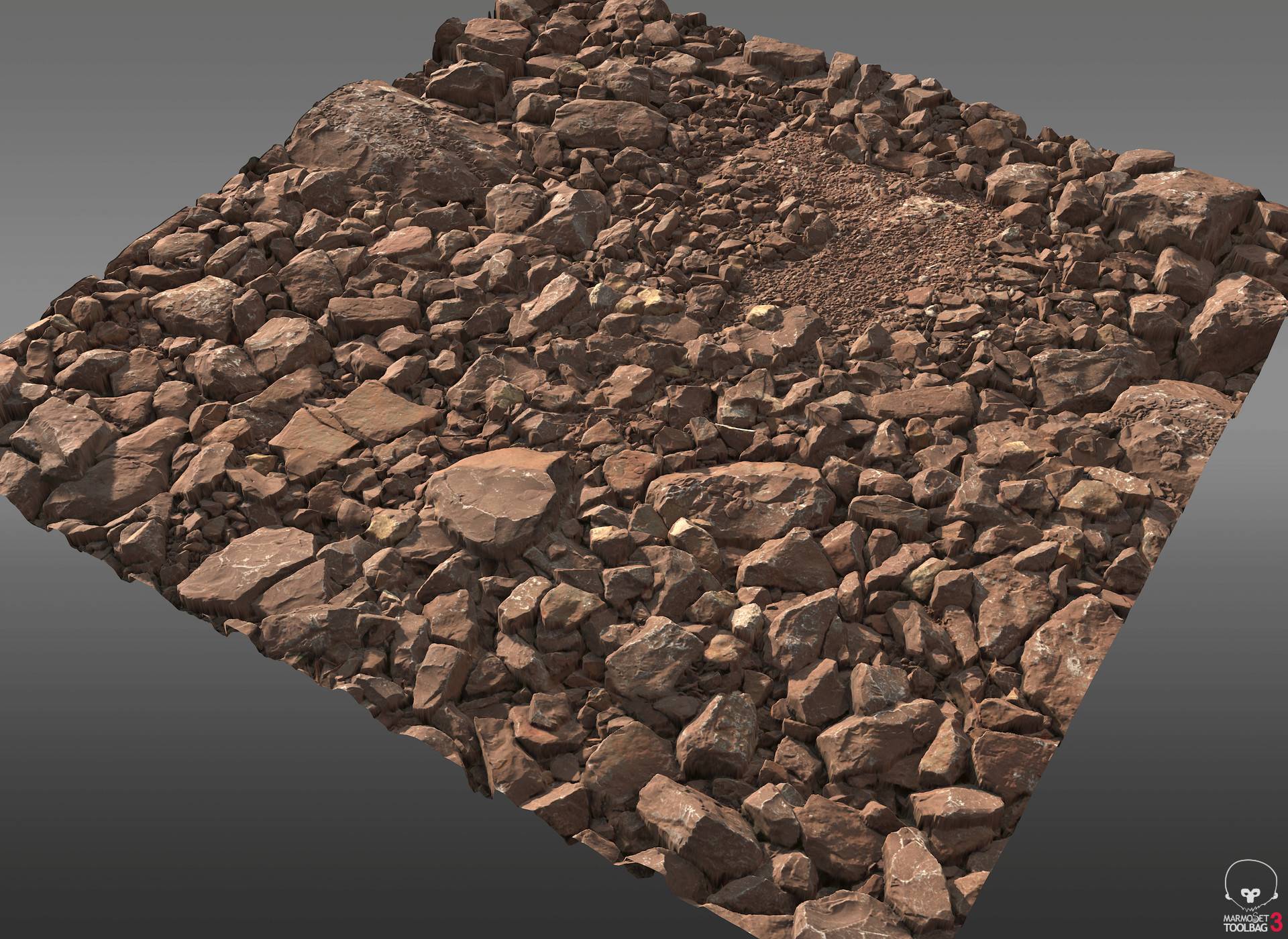 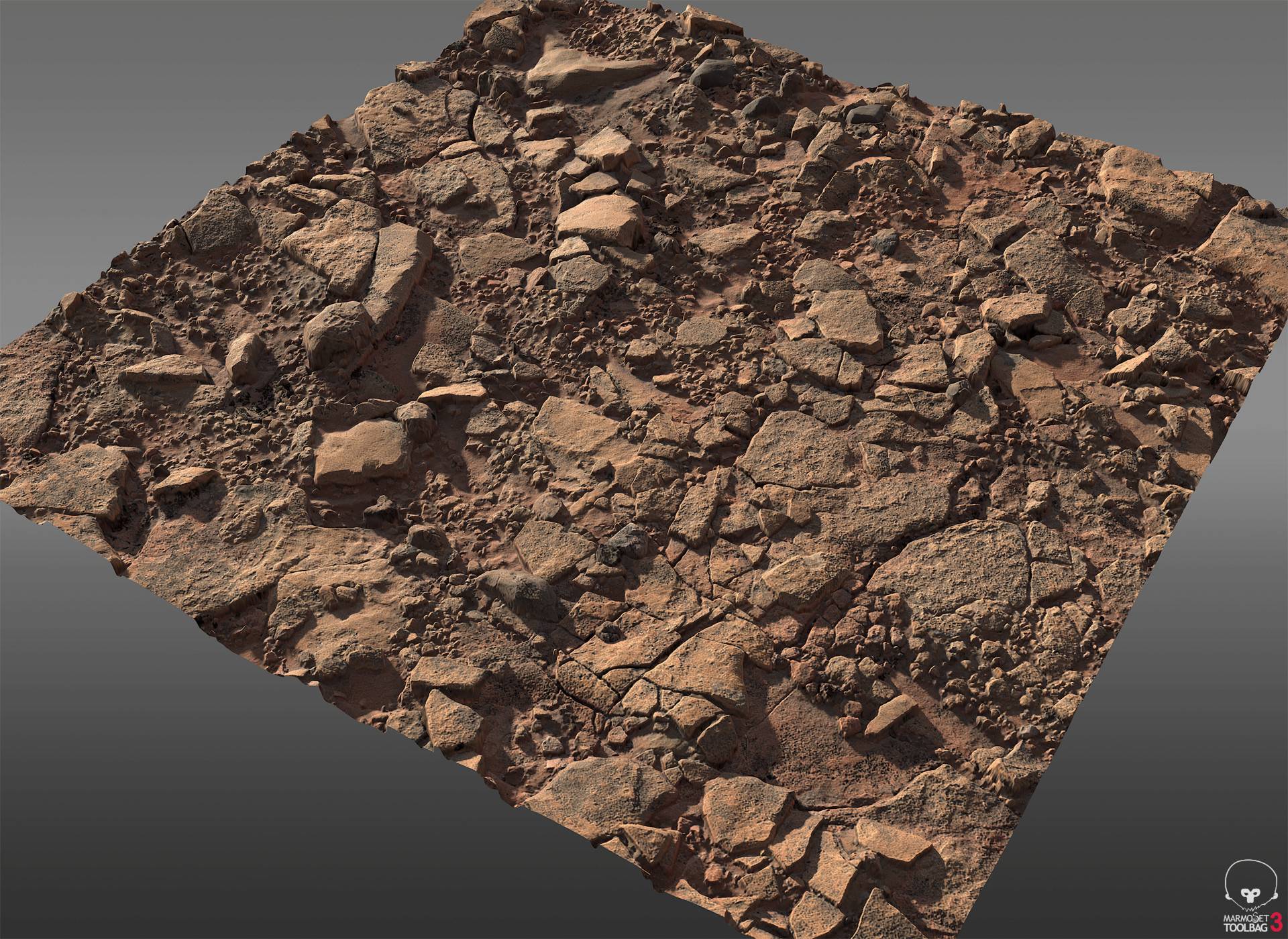 It was quite amazing to see the realism of these one, So, I started in scratch from blender, thought displacement maps would help, So, I used this diffuse map, normal map and displacement maps-

and ended with this result - Sorry its half rendered, but that was done just to show you the problem image- 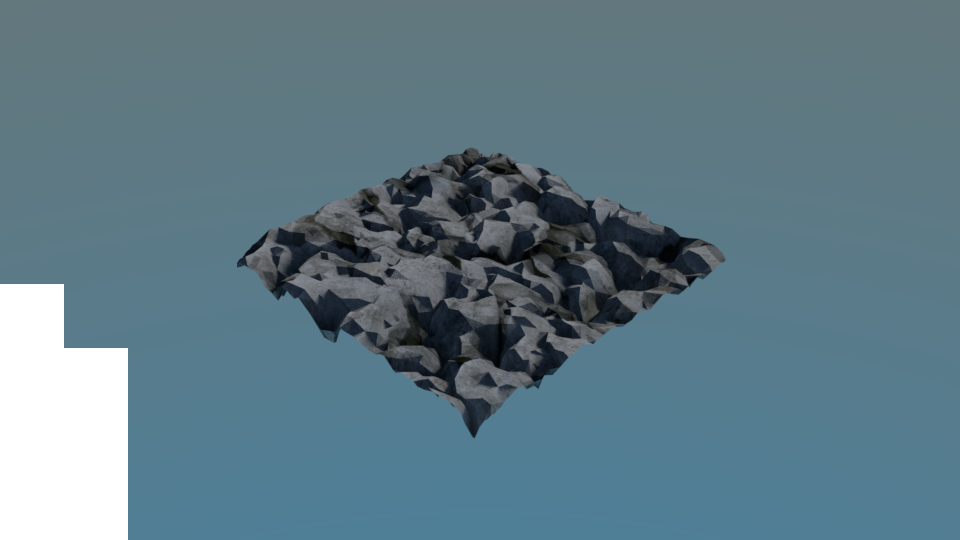 I've done that scene till this - 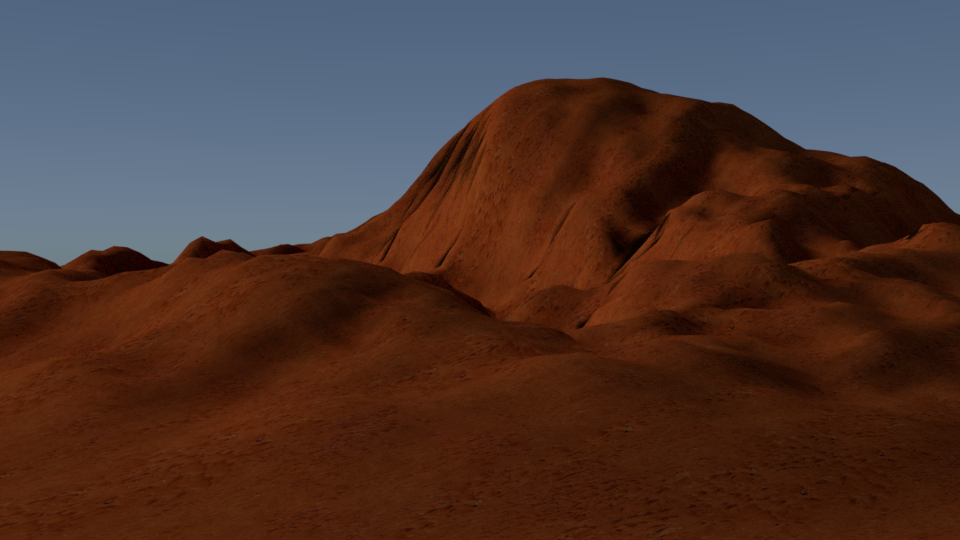 seriously asking, I've no clue what to do now, please help, I've tried different ways zillion times but that doesn't work for me

But that doesn't looks that good at all, it looks 100% fake, also, he did some renderings - 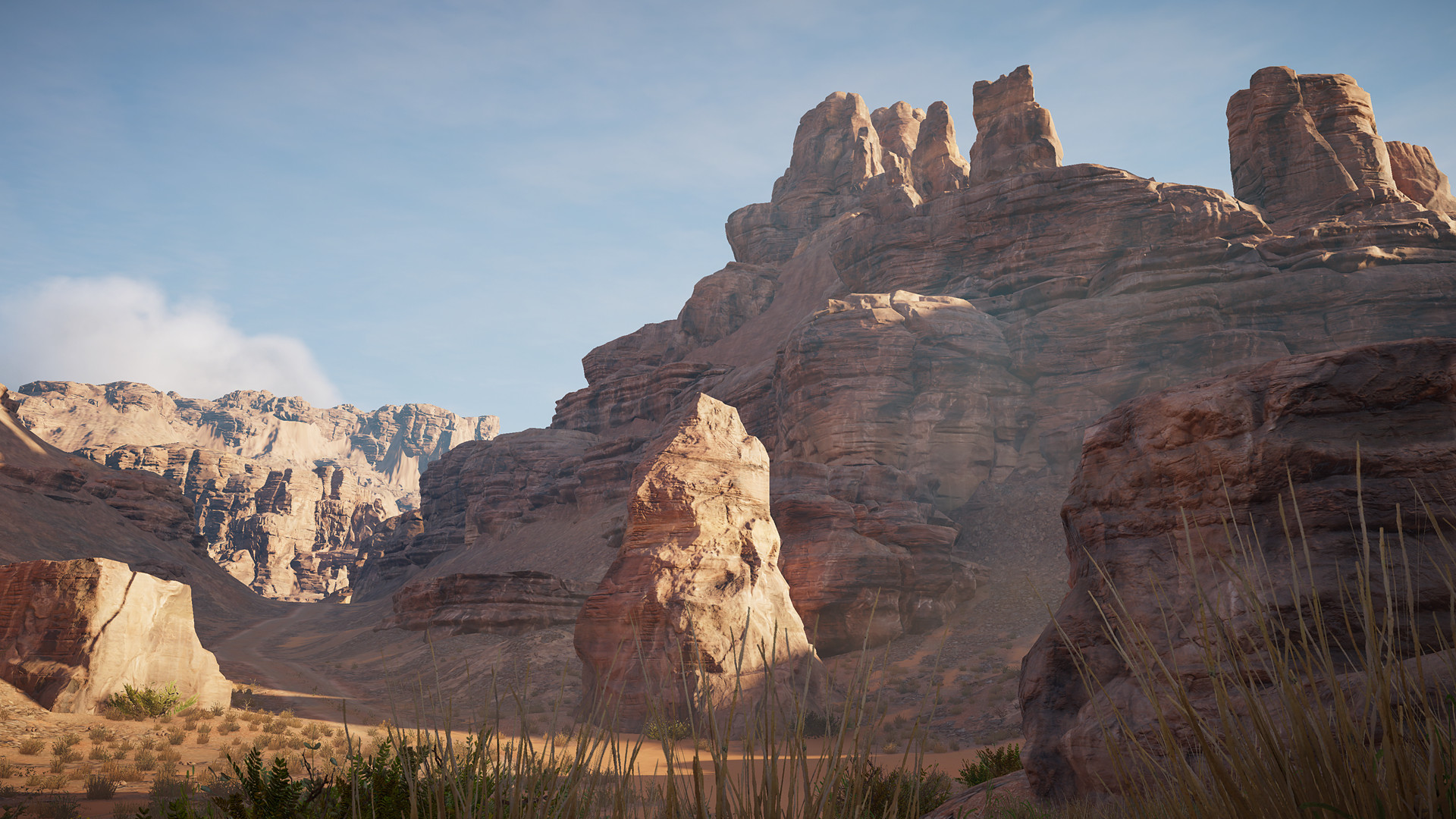 His work looks realistic and awesome colors unlike me. I tried to do everything with blender Cycles settings but got nothing.

His work seems to have very high poly. So, how he does it in low poly and this good terrain and images?

Also, I'm not sure that he did photoscans, as far I know, he didn't photoscanned these terrains.

Also, those were to be used in real-time games like Assassin's Creed next part. Is it possible that those can be used in games or just a rumor, I also want this to work with realtime renderers like Unity 3D

Please help, thanks in advance

I found the original artist's ArtStation page (https://www.artstation.com/artwork/Qqy0B) and the information on the left says he did photoscan a lot of the models.

My guess is his process went something like this. Keep in mind that this is only how I would imagine something like this would be done. This isn't an area I'm particularly familiar with, nor do I know what programs he all used, or exactly how the final models are put together.

All of the square terrain models are definitely photoscanned. It may be possible for a highly talented artist to create something like that from scratch, but it would take a huge amount of time, whereas photoscanning by comparison is much quicker. Given that he was working for a game, the company would want the fastest results with the highest quality, for which photoscans are great.

Photoscanned models are very high in detail to start with. From the silhouettes of the models it appears that they have been either retopologized, or the model started as a subdivided plane. The terrain models have a fair amount of detail in them, much more than your model does.

From the photoscanned models, the artist most likely baked the maps from the high resolution mesh to a low resolution one, possibly even just a plane. This would give maps that could be applied to the low detail object and give it the appearance of high detail. A displacement map could also be greated this way, so the terrain models could be subdivided planes.

For the large terrain models, he did you WorldMachine, which is a program specifically made for making large terrains.I haven't used it, but I can guarantee it has terrain building features that Blender doesn't, that's just the nature of the two programs. The artist most likely created the large terrain models, and then used the textures he created from the photoscanned models to add the smaller details. All of the created textures would be layered on each other at the place he wants the detail to be, and they would be blended into the rest of the terrain. I have no idea how WorldMachine handles geometry, but it's likely that there is a way to add more geometry to high detail areas, so the displacement map would look good. If you want some more information, look at how others have created game terrain, such as this discussion here: http://polycount.com/discussion/88933/how-to-make-terrains-for-games.

Now that's all great, but you want to recreate this in Blender. For the small terrain sections that's definitely possible. However, if your end goal is large game terrains, I would suggest using the game engine you plan on using. Unreal Engine 4, for example, is often used for level/world creation and levels are often built in the editor. If realism is your goal, I would definitely suggest UE4, Unity, or some other capable engine for building your levels. The Blender game engine won't be the way to go for creating terrains like this.

To create terrain like the artist did, I would suggest starting with a photoscanned model. Photoscanning yourself is a lot of work, so try to find some free models online. Quixel has some great free models, such as this one here: https://megascans.se/assets/rjgmQ.

From that model, work on retopologizing it if you are only using it once, but if you want it to be entirely map based, then bake some maps from the model. There are plenty of baking tutorials online (make sure you search somewhat specifically for blender related baking tutorials unless you feel like making cakes or cookies).

I can only say so much here, and I don't have the most experience in this area. What I can say for sure though, is that creating terrains like this is an art form that requires a lot of time and practice to get right.

17
How to properly hook up various maps types in Cycles?

1
How to use Blender Internal to UV map AND Alpha map?
1
Strange seams on a normal map
2
Workflow for modeling assets like this (picture included)
0
Low poly mesh/Oddly sharp edges on normal map where it is supposed to be smooth
2
How to combine or replace "Diffuse" BSDF with "Emission" on model that uses normal maps?
1
Displacement node not working as expected
2
Blender 2.83 Displacement - Cycles and Eevee