Animation Nodes: How to create faces from a Particle System?

I just started using animation nodes and don't understand a lot quiet yet.

What do I want to achieve? I've set up a particle system with an icosphere as emitter and used animation nodes to create splines between the particles:

This is my node setup so far (it's basically the node setup from the AN-docs):

And this is the result: 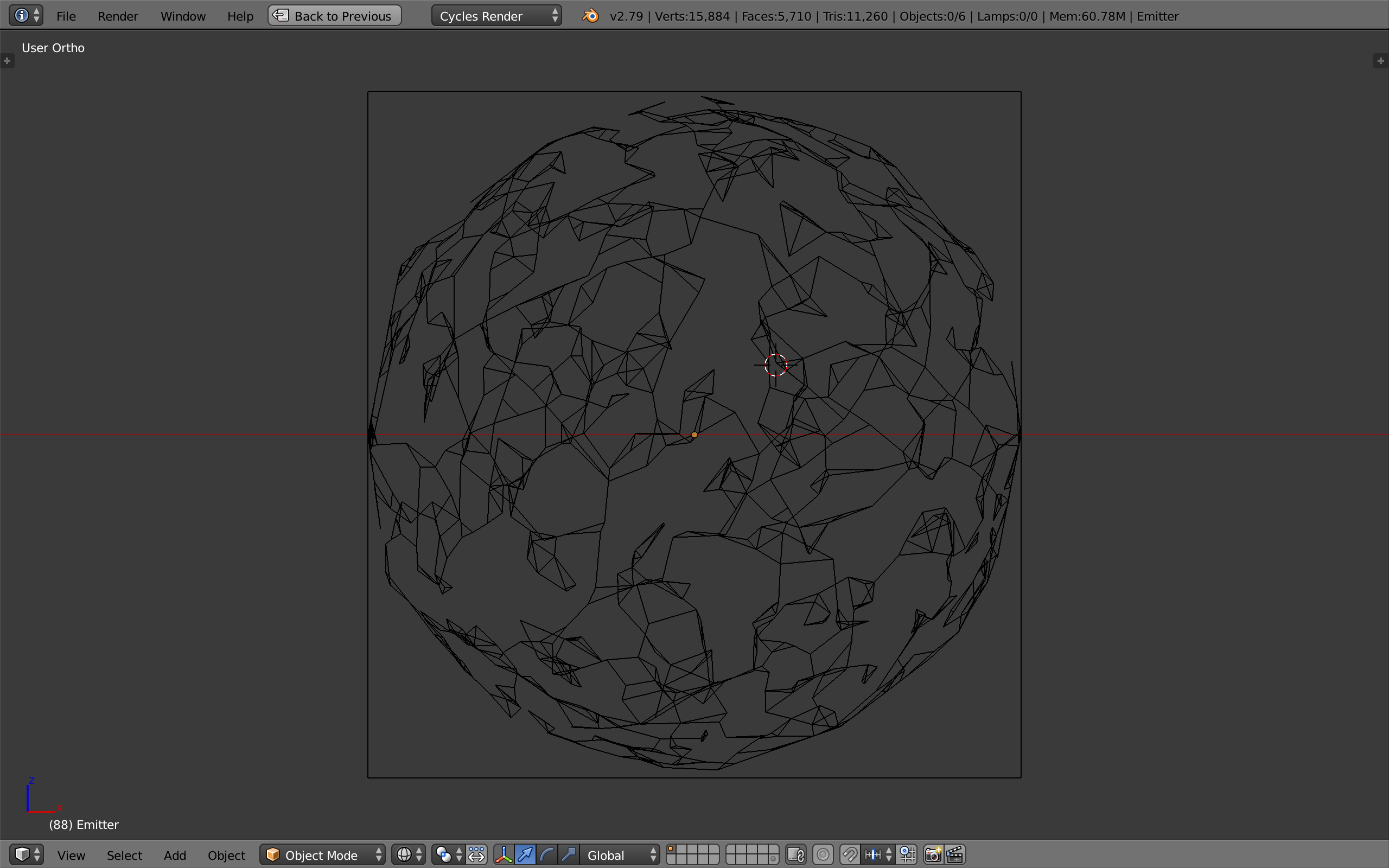 So far so good. But now i want to create triangular faces (and different objects for each face) between close edges that are already connected.

I've played around with some nodes, i.e. "Combine Mesh Data", "Create polygon indices" and others. As i'm new to AN I don't really understand the input and output format for each node so i'm stuck here.

I looked at this question but didn't understand how to apply the provided answer to my question... :( Create a Mesh with vertices

I uploaded the blend file:

And this is similar to what i want to achieve: 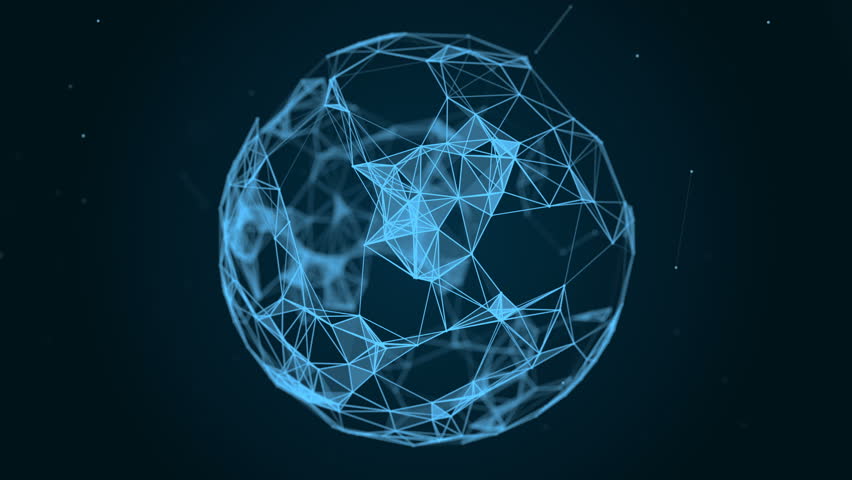 The shape of the faces doesn't matter that much. But it's still important which parties connect, so the faces don't go right through the center of the sphere.

Before getting into the answer, let us first study some facts about polygon indices lists:

The underlying structure used in the Find Close Points node is the KD Tree and we will be using it to generate our polygons as well. A KD Tree can provide you with the indices of the n closest vertices to a given point--Which can be any arbitrary point. If we used those indices to create a polygon where n=3 we will get the polygon indices of the triangles you wanted. if we used n=4, we will get quads and so on.

So we create a loop that takes the KD Tree that represents the vertices locations and n as inputs, a list of arbitrary vectors as an iterator and returns the created polygon indices as an output:

If we attempts to use the output directly, AN may return an error, that is because some indices might have been created more than one time, this is due to the fact that the same n vertices might be the closest to multiple arbitrary vector. So it is obvious that we have to make sure no polygon is created twice (Remember that a polygon can take multiple forms since order of indices doesn't matter).

Study Loops in the documentation to understand how this reassign works. We then need to check if the current polygon exist in the list of polygons we just created by appending and reassigning, this can be done by using a simple python generator:

Where polygon is the set of the indices of the current polygon and polygons is the list of polygons we just created by appending and reassigning. We simply convert the polygons to sets (Because order doesn't matter, remember) and check if they are equal, If any of them is True, True will be returned and False otherwise, the not invert the boolean so that we can use it as a condition in the loop generator:

By using the condition input in the generator, we only add the polygon if all the booleans in the list is False.

And by using the loop we created, we get: 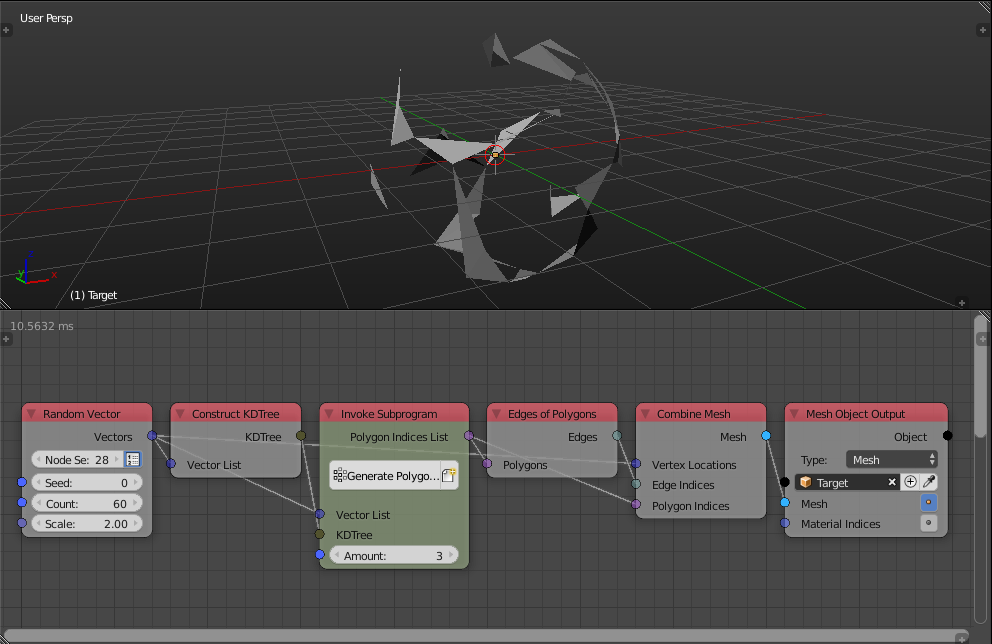 By setting the amount to four, we get quads, however, quads might not always be coplanar nor convex, so the results might be messy: 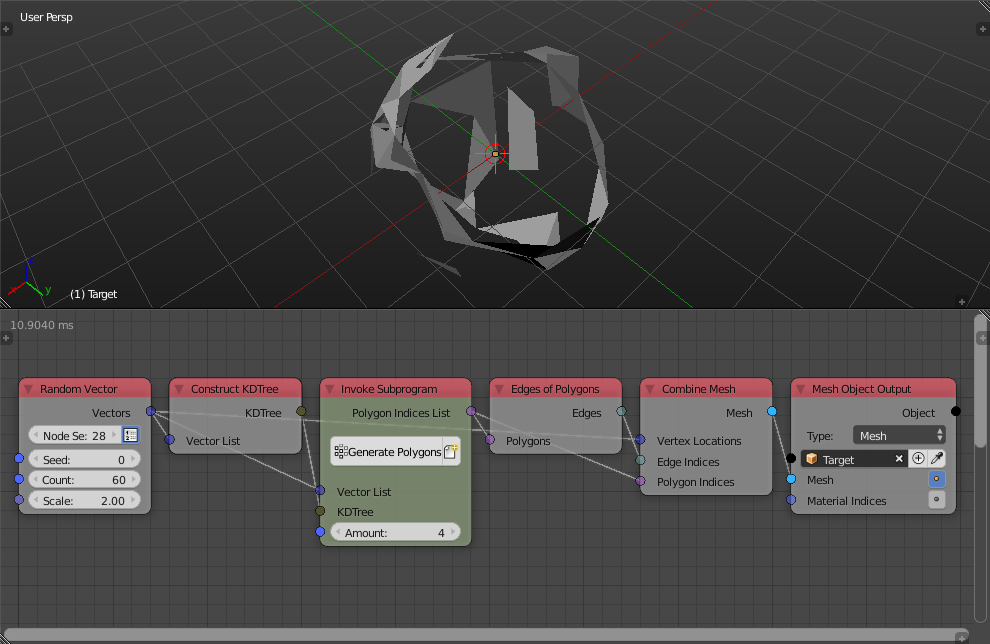 So far we have been using the vertices locations as the arbitrary vector list, and it works, but better result may come out when you use different vector lists (In my case another random vector list but with different seed): 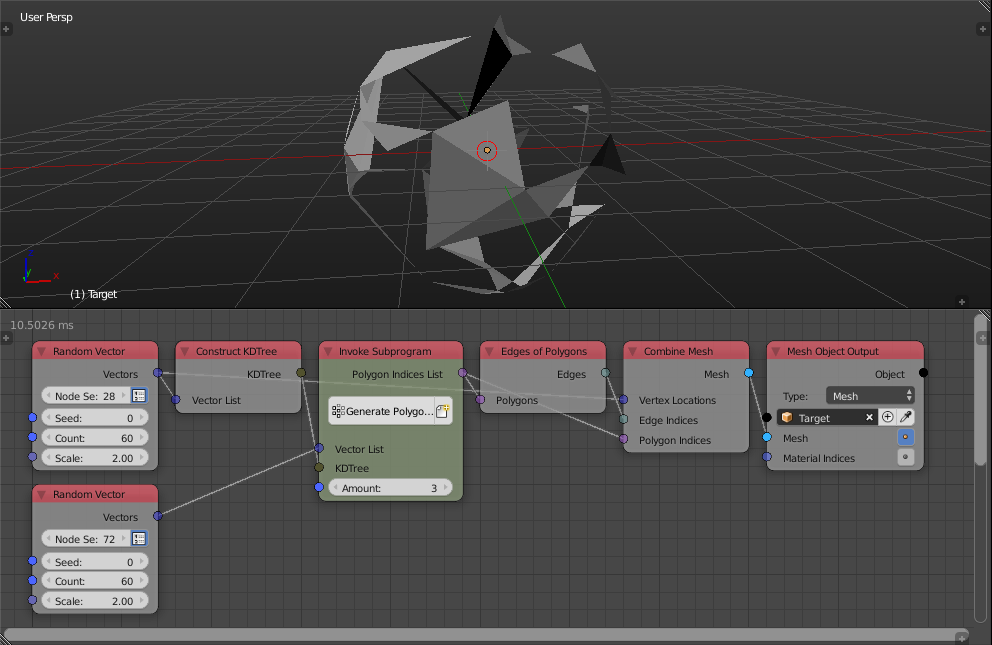 10
How can Particle Objects copy emitter's color texture?
4
Create a Mesh with vertices
0
Network animation with faces / simplicial complex using animation nodes
0
Emit particles as vertices and then creating a convex hull out of this