I tried to look for my question before asking, but could not.

I'm doing Blender + Unity, which is why I'm trying to rig via vertex groups and weight painting. (I think that's the most logical approach to Unity)

The wheel in the below gif doesn't rotate the way it should. Not only does the vertex group not rotate 360 degrees, but the mesh selection doesn't stay rigid during the rotation. This issue is also shown by using the wheel rotating bone.

To better uderstand the vertex behaviour try this little experiment: scale down the default cube to something like 0.1 BU, then create an armature with two bones, one on the left (X = -1) and one on the right (X = 1) of the cube.

Assign a weight of 1 to all the vertices relatively to both L and R bones.

Your wheel has the same problem, because is weighted to 6 different bones: the correct approach is to have it weighted only to a single bone that will have to perform all the movements (i.e. its Y rotation will be the rolling, its z rotation will be the direction, its location will be influenced by the complex mechanism of the shock absorber, etc ....) 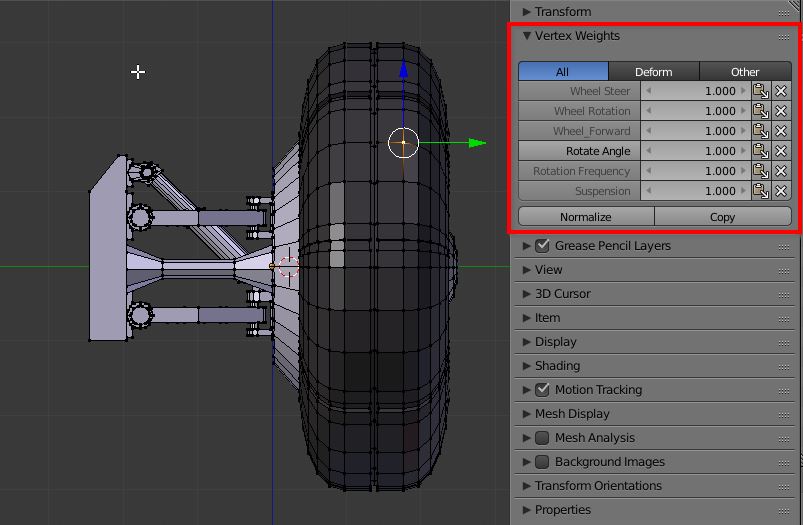 Not the answer you're looking for? Browse other questions tagged rigging weight-painting unity or ask your own question.

0
Editing a rigged mesh (MakeHuman > Blender > Unity)
0
Why does weight painting this skeleton with reverse kinematics rotate the vertex around the bone
0
no Shape keys and weight painting, are they compatible?
0
Blender Armature Weight Painting - Bone does not move how he should
0
Armature distorts mesh on transformation
0
Vertices being moved by armature despite only moving bone having no weight
1
Weight painting using Auto Rig Pro on Blender 2.8
0
How to make part of rigged mesh stationary?
3
Add/Transfer one object's weight painted vertex groups to different object (identical mesh)?