How to save an .exr file with 32 bit with python

I'd like to create a picture in blender and save it as a 32 bit exr.

The above code makes 16 bit exr according to imagemagick. I want to use bpy.ops.image.save_as somehow from python, in conjuction with this code, to emulate the behaviour of Image->Save as Image with the option [Float (Full)] rather than [Float (Half)]

The Save as dialogue points to a thing called ImageFormatSettings. Where can I supply this in python? 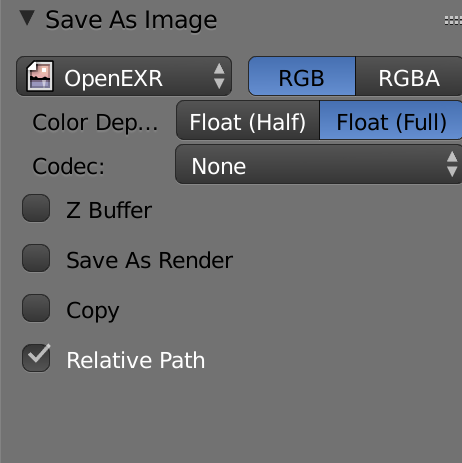 Note that '32' is a string and not an integer/float. Then save the image like this:

Not the answer you're looking for? Browse other questions tagged python image .exr or ask your own question.

4
Python Save MultiLayer EXR BUG?
0
.exr file quality options for seperate renders?
4
How can I update a specific layer of a multilayer exr file?
2
Creating and packing a 32-bit float image
2
Cycles save as EXR image
4
How can I get rid of the black dots or black pixels in a float 32-bit EXR baked displacement map?