I have a group of legionary puppets fighting busily in Game Engine. They are mesh animated by armatures, and have equipment parented to empties parented to the armatures: 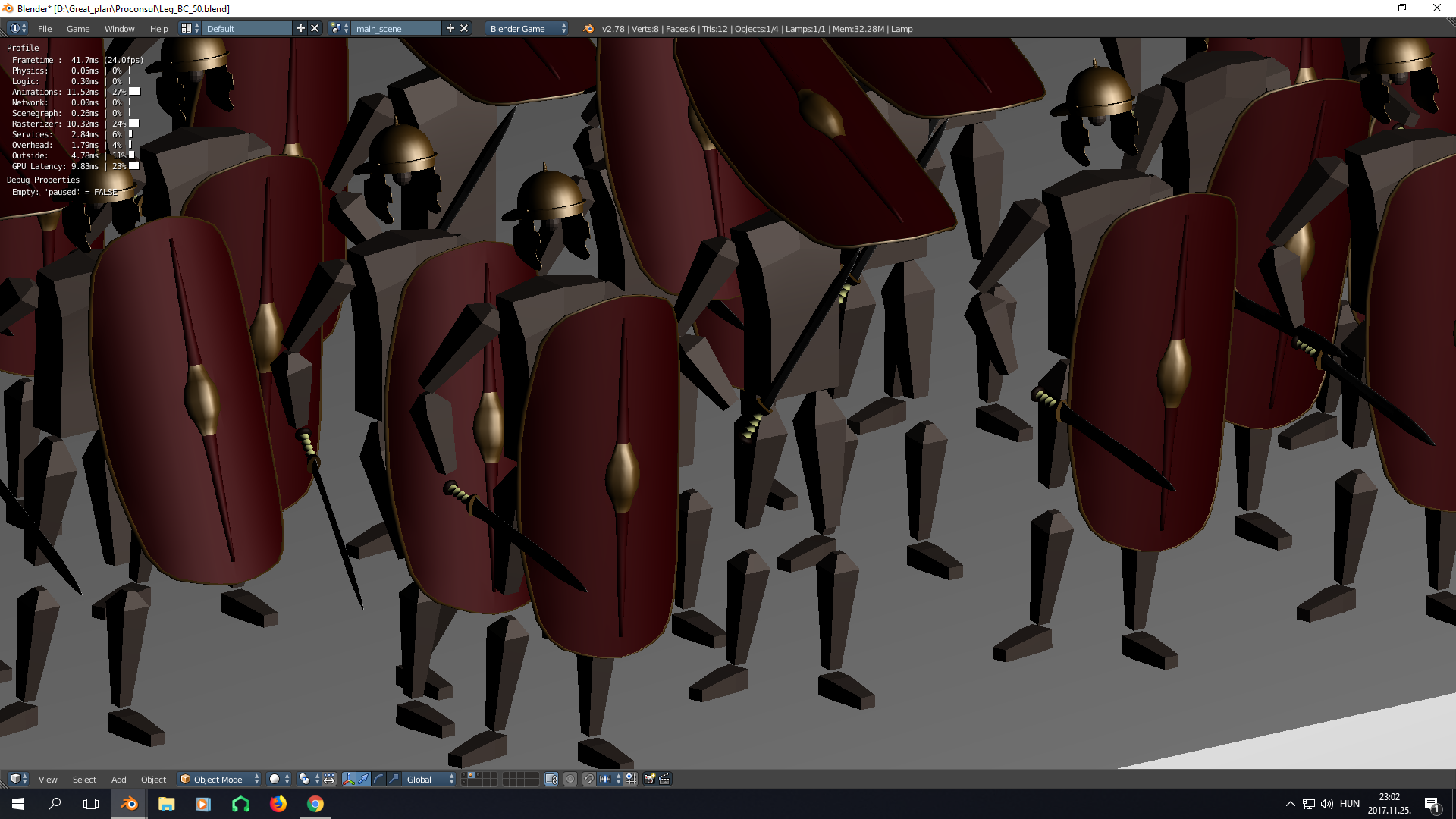 However when they are looked at through the perspectivic camera (parented to another puppet's head), both in embedded and standalone player, they show a curious graphic issue: 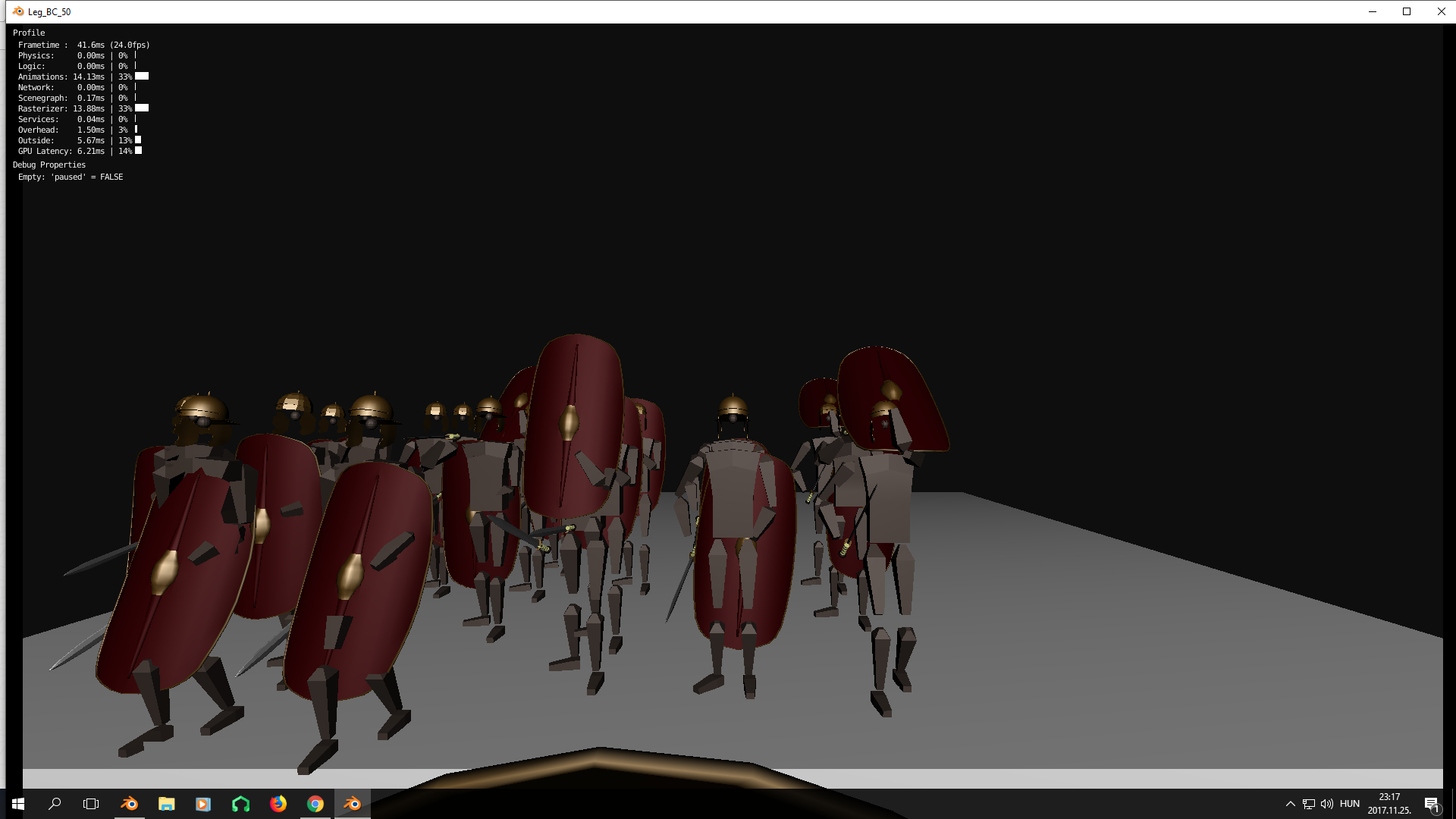 The bodies of some of them is seen (or maybe actually is) in the front of their shields. What is the cause of this, and how I might try to resolve it?

EDIT: Further testing showed that when they are not moving and displaying the animations the issue nevertheless occurs, and that ortographic cameras avoid it.

EDIT2: The issue was finally found to be related to the absurdly small (0.00000001) 'camera near clipping distance', which I have set to see my own cheek-plate. It has nothing to do with offsets, levels of detail or parenting. But I still can not infer why this should cause such a problem.

EDIT2: The issue was finally found to be related to the absurdly small (0.00000001) 'camera near clipping distance', which I have set to see my own cheek-plate. It has nothing to do with offsets, levels of detail or parenting.

You found the issue by yourself. I just want to answer the followup question:

why this should cause such a problem.

The 3D engine of the BGE uses Z-Buffer processing to "sort" the rendered pixels. This means your scene will be "sliced" between the near and far clipping distance of the camera.

Within one slice the render can't decide which face is in front of the other. So it will pick more or less a random one. That is the reason why you should avoid planes covering each other with a very small distance (e.g. a painting at a wall). This can cause Z-Fighting at pixel level.

In orthogonal mode you see the same detail level at all distances. Therefore the z-Buffer is equally distributed (all slices have the same thickness). 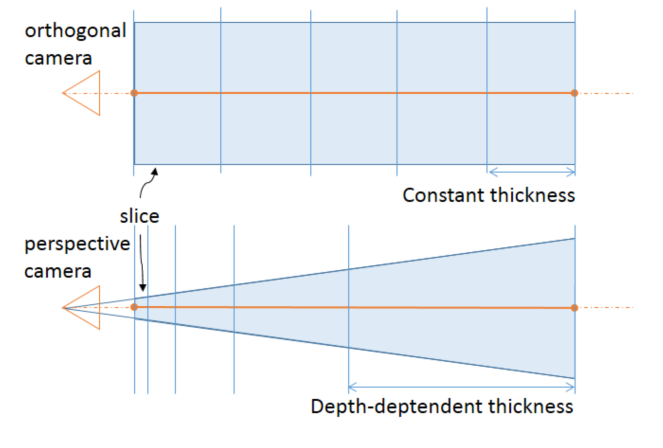 As you setup a really close near clipping plane you get a really detailed helmet with the costs of the other characters end in very thick slices.

I assume the result was that the complete shield and the legs are within the same slice sometimes rendered in the wrong order. The slices are so wide that you can't see pixel-wide Z-Fighting (or it is not obvious in your sample images).

Obviously the near clipping plane should not be that close. When you set up a more practical value (e.g. the default value) you should avoid the z-fighting effect.

There are several different options to show the helmet.

Not the answer you're looking for? Browse other questions tagged rendering animation game-engine or ask your own question.

20
Black artifacts when looking through many transparent objects?
0
BGE shaking camera when i walk or run
0
Object Disappears in Camera View Even After Clipping Distance Adjusted
0
Blender bge camera edge clipping aproach help
0
Why can't I see my animation through camera in BGE?