So i have these variables that search for the active object's coordinates.

However the "eul' variable does not read out the coordinates. If I also try using float on the Xrot for Zrot variables then i will get a "too many arguments" error.

I've attempted to use "int" aswell but no luck.

Your script is fine, i just tested and it work as expected. The problem maybe is that you are looking in the python interactive console, but you need to look in the system console. 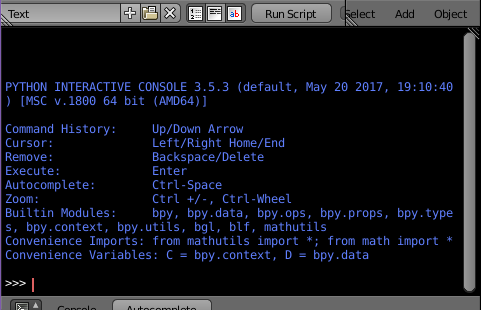 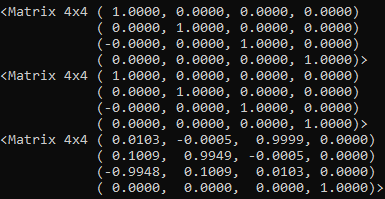 If you are in GNU/Linux os look in the terminal or run blender from a terminal.

In Windows got to: Window>Toggle System console:

Not the answer you're looking for? Browse other questions tagged coordinates or ask your own question.

2
Calculating the covariance matrix of an object's points - Rotation of an object
8
What is blender's camera projection matrix model?
5
Does rotation by exact angle become low-precise in blender?
3
How to make two bones have the same rotation matrix?
19
3x4 camera matrix from blender camera
2
blender camera from 3x4 matrix
3
How can I get the projection matrix of a panoramic camera with a fisheye equisolid lens?
3
How can I export or print coordinates of each selected vertex?
0
Camera Rotation in World Coordinates?
1
Take current rotation or coordinates as zero?