I don't know what is wrong with my python script

I am trying to generate a bunch of points from a bezier curve. I am converting my curve to mesh then gather vertices then delete the mesh as discussed by helpful contributors in the past.

But the points I generated do not match the curve 3D location. Please see attached screenshot, blender file, and code.

To recreate my problem: 1. create a bezier curve 2. manually move bezier curve on all 3 axies 3. run the python script 4. see points generated do not correspond to the new 3D locations of the curve but rather match its original position only (when it was created at origin). 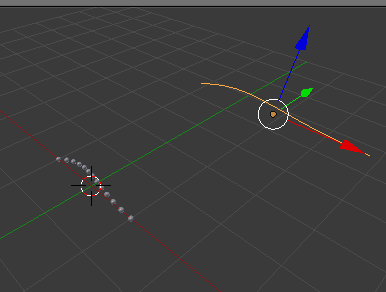 Latitude and longitude on earth could be considered a local coordinate system, with origin (0, 0) ... It's just some arbitrary point on the equator.. It tells us nothing about where we are in the universe, that the axis is tilted towards the sun...

Can calculate a global coordinate from any local coordinate by pre-multiplying the vector by the object's matrix world (obj.matrix_world) This accounts for any translation, rotation and scale on the object in global space.

Applying location, rotation and scale has the effect of making an objects matrix world identity, by converting all local coordinates to their global equivalent.

In case you missed it, the link provided by @tet_li in comments provides a detailed explanation of coordinates in blender.

20
How to convert coordinates from vertex to world-space?
4
Calculate points on a Nurbs curve without converting to mesh
1
Blender 2.8 vertices of object doesn't update after location change in python

2
What is wrong with my repel player script?
2
Crop image with Python script
7
Know when edit-mode is entered by script? (python)
8
More than 32 colours for gradients in Cycles?
4
Calculate points on a Nurbs curve without converting to mesh
0
Distorted mesh when I use a bevel object on Nurbs curve vs. Bezier curve
1
What's Wrong with My Python Script?