I have a setup with animation nodes. I think I misused it a little bit, since I am not using it for a continuous animation, but rather to generate a different random frame every frame. However, it is completely deterministic, since every random aspect is seeded by the current frame.

Now my problem is: In the end, I want to move around a few objects with a matrix or a transform (don't care which). It works fine in the viewport, but when rendering everything works except moving the objects (I'm also instancing some objects, assigning a material, calling scripts etc., which all seems to work).

Now I read this question, but that does not seem to be my issue since no information is preserved across frames and everything is deterministic via the seed. I found a little workaround to make it work, but it seems more like a hack: If I render my animation with the following script, it works:

It also works if I change the frame, then turn off automatic execution of the node tree and then render the frame like normally. However, I now can't render it as an animation. Any idea what could cause this behavior? How can I make it render as animation?

Edit: Some additional information: It seems to render before everything is executed. During rendering, in the viewport I can see that all the objects get instantiated at (0,0,0) as I want them to. Then, it renders, and then the objects move towards to where I want them to be.

This is the part that is not executed, everything before seems to work: 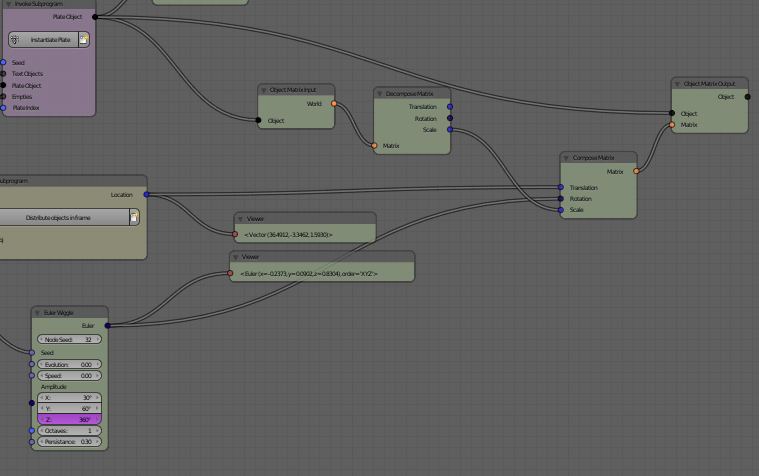 Browse other questions tagged python rendering transforms animation-nodes or ask your own question.

2
Is there a way to get ONE random value as seed for Cyles per render?
1
animation-nodes interfering with cycles rendering?
1
Random selections with animation nodes
1
animation nodes - delay frame update
2
Problem rendering at the end of rigid body animation with script
0
Armature Animation is not rendering? (Blender 2.82a)